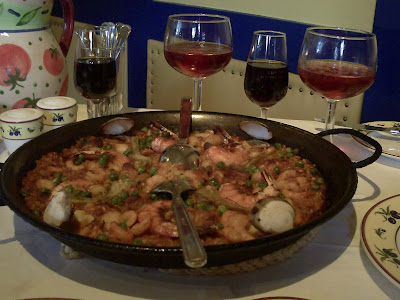 Yesterday was my birthday, so my mom & I decided to celebrate it over this past weekend, as Monday is a pretty awful day for a birthday. She absolutely outdid herself spoiling me this year, getting me a total of 32 gifts, one for every year I’ve been around. Aside from a gorgeous Swarovski crystal watch (I cried when I opened it), some other beautiful jewelry, girly stuff like lotions & make up, and a great new purse, she gave me a very cute new digital camera/video recorder which I hope to make great use of for PGEW once I figure out how to use all its features (we’re still getting to know each other). It was wonderfully overwhelming to see everything she’d gotten me, as I thought we were just doing dinner! We usually like to treat each other to dinner at a nice restaurant for special occasions, and she asked me to choose what I wanted to have. I really felt like having Spanish food, the idea of a good paella and some sangria making my mouth water for the past 2 months, and we both toyed with the idea of trying some of the newer tapas bars in Downtown San Jose. Instead, we decided to stick with going to Iberia, a Spanish restaurant in Menlo Park, as it had been years since either of us had been there and we knew we liked the food and ambience.

We were running a little late, but with an amazing display of Mario Andretti-like driving skills from my mom, we arrived on time for our reservation. We were seated in the front room, as it was getting a little nippy outside and we both wanted to enjoy our meal, not shiver. They started us off with some warm bread and these amazing little cheese biscuits that were flaky and rich at the same time. I kept looking for the assorted olive and almond platter that they used to serve at the very beginning but it never came. We figured they might have moved the serving time to something later and went ahead and ordered their sangria. I am a huge fan of sangria, having tasted some excellent (virgin) versions in Colombia as a child, as well as some spiked ones here in Sac. But I can honestly say I’ve never tasted a sangria this amazing! It had a lot of different liquors in addition to the standard red wine (vodka, triple sec, some other stuff I can’t remember), giving it a lovely reddish-pink hue that is different from the standard deep red of a typical sangria. I didn’t even miss the fact that there wasn’t much fruit in it (I think I only had one slice of peach in mine), it was that tasty. We also ordered a couple of glasses of Jerez, a sweet port wine that goes well before or after a meal.

Mom and I were looking forward to trying the escabeche de mariscos for our appetizer; unfortunately, they were all out. The gazpacho, though it appeared appetizing (garlic and almond, mmmmm), was not what my mom was looking for, so we settled on the ensalada tibia con tomates, pan y queso. What an amazing dish! It was a rich and cheesy bread pudding baked to a perfectly crispy golden brown, topped with warm cherry tomatoes and fresh basil, drizzled with olive oil & garlic. I probably gained about 40lbs just looking at it, but will gladly do some extra workouts just to experience those flavors again. At this point I was really jonesin’ for my olives & almonds, so we asked our waiter if they had discontinued serving them. He said they had, but would serve them upon the customer’s request. I am not sure if we needed to put that in writing or something because we never did get them, so that was a disappointment.

Finally, after being served two excellent glasses of wine (a Chenin Blanc for Mom, a gorgeous Malbec for me), they brought out our incredible paella tipica served in the traditional cazuela. The aroma was almost as intoxicating as our drinks, saffron and spices tickling out noses. It was beautifully presented and I just had to use the new camera to take a shot of it. The paella was cooked to perfection, the rice moist in the middle, yummy crispy edges. This particular kind came with chicken, shrimp, scallops, pork, clams, mussels, and prawns, along with the traditional peas that Spaniards so adore in their food. We thoroughly enjoyed the dish but needed room for dessert, so we ended up asking for a box for leftovers.

Dessert was very difficult to choose as almost everything sounded incredible. We eventually settled on the higos rellenos, dried figs soaked in port wine and stuffed with chocolate, walnuts, and pistachios, drizzled with a port wine reduction and topped with an amazing pistachio whipped cream. It paired very nicely with the Malbec and was just light enough to avoid feeling replete & uncomfortable. I would have taken a picture of it because it looked beautiful, but by that time they had dimmed the lights too much and I had not yet figured out how to use the flash on my new camera. You can just take my word for it that dessert was scrumptious! The only downside of the evening other than the olive issue was the bill: the menu is very misleading when it came to the price of the paella, and we ended up having to pay twice the price we were expecting. If the waiter had at least pretended to be sorry, we probably wouldn’t have felt so misled and downright cheated, but he ended up acting very snobby about it, after being the perfect server the rest of the evening. Nevertheless, my mom and I didn’t let it ruin our fun girls day & night, and we decided that next time we would try one of those new tapas bars in San Jose instead.