I know I still owe a review of last Saturday night’s dinner at The Firehouse, but I’m still waiting on some pictures that said date took for me. Note to self: CLEAR MEMORY CARD BEFORE ATTENDING MAJOR DINNER FOR FUTURE BLOGGING!!! Anyway, I’m going to skip ahead to Tuesday's dinner at Andy Nguyen’s with my dear friend Jodi instead, since it’s still fresh in my mind and I have my pictures handy.
Those of you local to the greater Sacramento area have probably heard of Andy Nguyen’s. Originally a regular mom & pop Vietnamese restaurant, they shifted gears towards vegetarian cuisine, as the owners are devout Buddhists and wanted to keep their traditions & beliefs alive in the food they cooked. Last Tuesday night was only my 2nd time there in about two years, though I’ve meant to try it again on several occasions and wish I could go there more often. Since Jodi’s a vegetarian and we usually go to the same Greek fast food place whenever we meet for dinner, she decided we should go to AN’s instead. Problem solved. 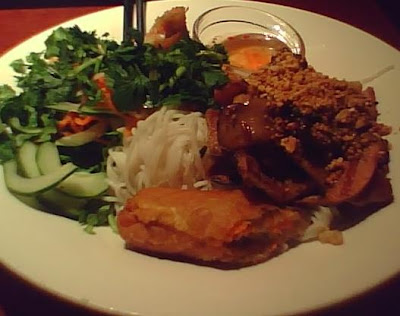 Located on Broadway & 20th Streets, it’s easy to miss during the day unless you know what you’re looking for, but they make up for it at night with a blazing red sign. Their décor is very “zen”: dark cherry walls & tables, dim lighting, lush plants, and charming little Buddha statues all over the place. Soft new age-y music plays in the background and I personally feel they should have a small fountain somewhere just to complete the entire effect. Their menu matches the décor in that everything has a very enlightened, peaceful name: Enlightened Mind Rolls; Generating Compassion; Wisdom Puffs. I’m a sucker for anything different and rather easily amused, so I will admit this is my favorite part of going to AN’s.
Because Jodi is becoming more strict in her vegetarianism and AN’s is a free-for-all for her, she came armed with a large appetite and with the intent to order too much food so she could take some home. I was still a little full from lunch and am always on a budget, so I took my time perusing the menu of dishes ranging from $8-$16 so I could choose carefully. Our servers were very patient with our indecisiveness, though the offer to answer questions was never made, nor were any recommendations. We started with the Enlightened Mind Rolls, one of their most popular appetizers, followed by the Wisdom Puffs. The spring rolls stuffed with noodles, tofu shrimp (yes, it exists), and herbs were very tasty and beautifully presented on a long rectangular dish. The peanut sauce that came with them was fresh, creamy, and sprinkled with plenty of chopped peanuts. We both agreed that the Wisdom Puffs were rather lacking in flavor; meant to be a vegetarian version of a cream cheese crab puff, they were filled with bits of tofu “crab” and…. something else. They were very crispy and again, beautifully displayed, but they just didn’t do it for either one of us, unless drenched in the two sauces that came on the dish.
I’ll have to get with Jodi on the actual names of the entrees she ordered, but one was a noodle 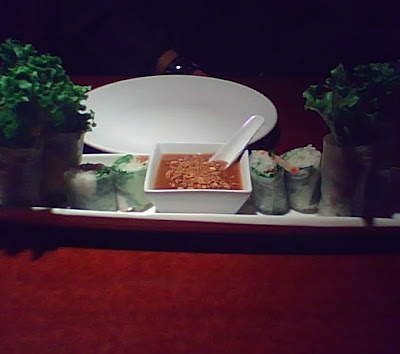 bowl filled with button mushrooms, scrambled “egg”, and a mountain of veggies. Though it was something I’d considered ordering for myself and looked so healthy I could have cried from happiness, we agreed that it could have used more yummy sauce (which appeared at the bottom of the bowl when she dumped it into her take home container… guess we were supposed to toss it all together). The other dish had two filets of “salmon” served with gorgeous mushrooms, carrots, and broccoli, sprinkled with deliciously crispy onions. The sauce was excellent, probably based the traditional oyster sauce, and though I didn’t try the “salmon”, the entire dish looked scrumptious.
I ordered the Awakening of Faith, which is pretty much the vegetarian version of a traditional Vietnamese rice noodle salad that I order anytime I go to a Pho house. I got a huge bowl of fresh rice noodles with plenty of faux meats, hearty mushrooms, and a large handful of chopped lettuce, bean sprouts, and herbs. Served with a delicious sauce of rice vinegar, sugar, and chili pepper meant to be drizzled over the entire bowl, I was pleased with the amount of food I was able to get for just $8.50. Clearly enough for dinner AND lunch the next day. I would have preferred a bit more sauce, but I made up for it by dumping in the remaining sweet chili sauce that came with the Wisdom Puffs.
All in all, Andy Nguyen's is a good place to eat healthy food without breaking the bank. Though the prices may look high at first, when you consider their portion sizes you're actually getting a pretty good deal. Though I've read nasty reviews about their bad service and inconsistent food quality, I haven't found this to be the case just yet. Sure, the staff could be a bit more attentive but it's not like you're eating at The Firehouse. You're on Broadway, for crying out loud! Just being able to get a good meal that's not swimming in fat and staff who will at least come & check on you once in awhile is more than one could ask for. Squeamish about tofu meats? Give it a try anyway. It's not entirely authentic but it's still a nice, healthy departure from the norm.