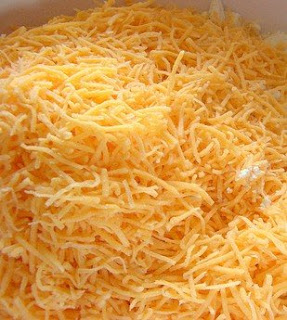 It’s so easy to go to the grocery store and grab an 8 oz. bag of shredded cheese for that week’s pizza or quesadillas and not think anything of it. Just as easy to grab packaged diced onions so that you don’t have to worry about crying as you chop away. Most salads are already bagged with all the convenient fixings already included, and who can possibly resist the call of Bertolli’s bagged frozen pasta meals that have everything you need to fake being a good cook? The marketing execs at major food companies have made a fortune for themselves by making us nice & lazy; and we’re the ones who pay for it.

Don’t get me wrong – I love the convenience of my TJ’s bagged baby spinach more than anything because I don’t have to rinse & sort through the potential bad leaves. And I do love the little frozen cubes of crushed garlic, basil, or cilantro for cooking. I have my lazy moments and love that there are convenient versions of yummy things out there, so that I may indulge my laziness. However, I’m sure those of you who regular readers have noticed that as much as possible, I like to do things on my own: I cook from scratch more often than not, I start with as many whole ingredients as possible, and I’ll buy things in bulk and package them at home according to my needs. Sure, it takes some effort, but consider the savings:

~ The other day I was at Safeway for some cat food & accessories and figured I’d stroll around to see if there were any good deals in the meat department. Though most people think I’m a vegetarian because I don’t eat meat that often, that’s not the case - I’m just cheap. Er, frugal. Meat costs an arm & a leg most of the time, which is why I buy the very basics as inexpensively as possible. Though I prefer going to TJ’s, large chain supermarkets can have some pretty amazing deals if you just look hard enough. Aside from the killer deal of $0.99/lb for some rather healthy looking Cornish game hens, I also scored a great flat of chicken thighs – about 16 in the flat – for $5.59. The same flat of chicken would have cost around $9 if it hadn’t been for the club card savings, so this was a steal. What does a single person who usually cooks for one do with such an insane amount of chicken, you ask? Separate it into different meal portions, stick it in individual zippered bags, and freeze it. Had I bought a four-pack of the same thighs I would have paid $6 or more for ¼ of what I’d just purchased. Plus, I’m not wasting food by cooking up all that chicken and having no one else to try & eat it but me. I will also do this with a whole chicken if I can find a good deal – just butcher it properly and you have breasts for one meal, thighs & legs for another, and some excellent pieces to begin a nice broth or consommé. Shrimp also gets the same treatment if I can find a good deal on some fresh ones by the pound – buy a lot, separate, pack, and freeze. 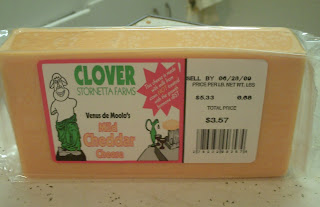 ~ I love cheese. Sometimes I love it too much. I’m trying to wean myself from it but still find myself buying it like a total addict. What I refuse to do though, is buy pre-shredded cheese. The amount of money wasted on this convenience is enough to make my head spin! The best deal I have ever found on shredded cheese is a club card special of 2 8oz packages for $5. $2.50/bag sounds pretty reasonable, right? WRONG. I can buy the same 8 oz. block of cheddar for under $4 most of the time, I wind up with a whopping 4-5 cups of the final shredded product. For less than what the “sale” price would be, you end up with more than twice as much cheese to work with if you just do the work yourself. You are also getting better quality cheese that might melt a little more easily because it’s not coated in whatever preservative they use to make sure it doesn’t clump together in the bag. Graters are a relatively small investment, and you can use them for more than just cheese (make your own hash browns, grate parmesan for pasta, etc.). An added bonus: toned arms!

~ Even if you’re in love with bagged salads and pre-cut veggies, try to cut back on this 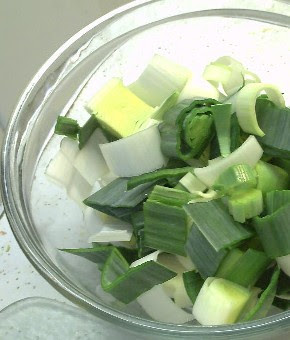 indulgence. Again, it takes some work to rinse & dry the leaves of lettuce, spinach, arugula, etc., but 95% of the time you’re paying less for a head or bunch of these greens than you would with a single bag. Because I get most of my bagged greens at Trader Joe’s, I don’t pay as much as regular grocery stores charge. The average cost of bagged lettuce at a chain store is around $3.50/8oz, whereas at TJ’s I pay no more than $2.29 for the same amount or double. Still, compared to the great deals on lettuce & spinach I saw at the Farmer’s Market this weekend, this is more than you’d pay to just grab a fresh head of lettuce & process it yourself. Invest in a salad spinner and some storage bags and you’re good to go.

~ As I mentioned in my post for Curried Chicken & Samosas with Mango-Pineapple Cheater Chutney, yummy sauces in jars can sometimes cost quite a bit. If you’re adventurous and have a bit of patience to make your own from scratch, it is very easy to cut costs on things like mayonnaise, BBQ sauce, chutneys, salad dressings, other types of spreads, pasta sauces, bruschetta, you name it! It may require some chopping, blending, or pureeing, but you get the same product for less, and you made it.

You can see the general trend here: do what you can on your own and you’ll be spending a lot less at the store. Many may argue that time is money, but I’m guessing more people are interested in saving money these days. Convenience is something that more and more people can’t afford anymore. Then there are folks who may still be baffled by the idea of making one’s own salad dressing or BBQ sauce when it’s so easy and quick to just grab a bottle of it and go from there. Remember there was a time when everything was made from scratch and there was still time to read a book, do yard work, or spend with loved ones & family. Including your family in the cooking-for-yourselves process is a great way to spend time with them, and while your teaching the kids (or yourself) how to cook, you can also gain the satisfaction of knowing that all that delicious food was made by you.