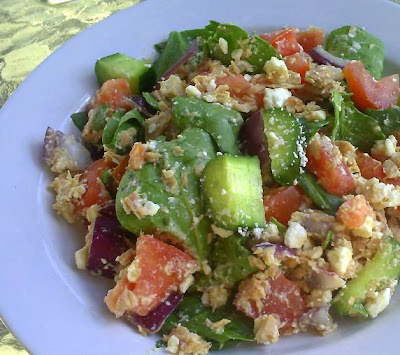 The only bad thing about the new season of spring here in the Sacramento area is that it brings a friend with it: allergy season. All the familiar symptoms are starting to rear their ugly heads right now. Still, the weather has been getting lovelier and lovelier, and most of the trees are approaching full bloom, so it’s too beautiful out there to complain too much about sneezing all the time. All this great, warm weather has been making me want to go outside and play like a 4-year-old, or have a picnic, or just do anything outside after so many dark, dreary months. It also makes me crave salads more than I already do, and since I haven’t had a good tuna salad in awhile, I thought this would be perfect to enjoy for one of my first lunches outdoors this year.

I love tuna salad as a rule but find most deli or restaurant prepared versions too mayonnaise-y (is that a word? It is today!). When I was a kid, my mom’s tuna salad had a nice balance of mayo and tuna, along with all sorts of crispy veggies, so when I got older and saw that most places made you wonder if they shouldn’t call their tuna salad a mayo salad with a side of tuna, it was a huge disappointment. I’ve made some awesome variations over the years (one with thick chunks of ahi tuna and this incredible dressing I’ll need to post soon), but there’s one they sell at the Sac Natural Foods Co-op that did make me skip around like a 4-year-old when I first tried it, it was that good. Their Mediterranean Tuna is not only delicious, but much healthier than the traditional mayo-based versions. Sadly for me, it’s like $8/lb, so I don’t get to enjoy it as often as I’d like.

That is, until I decided to start making my own modified version of it at home.

For about the same price as one pound of the prepared salad from the Co-op, I am able to get almost all of the ingredients and make this several times over. As I always say, if you purchase whole ingredients versus pre-made items, you can save a lot more because of how much further you can stretch the ingredients. Pre-made is great for convenience, but when you're trying to save money, it's not always the best option. The Co-op’s version has quite a bit of kalamata olives in it (which adds to the weight factor when purchasing it at their deli), but because they’re a bit too pricey I omit those from my version. If you happen to come across a good deal on some kalamatas, by all means add them in! They just further enhance the flavor. I also use low-fat feta cheese to up the guilt-free factor, but regular creamy feta is also amazing in this dish. Keep in mind that the tuna shares the spotlight with the rest of the veggies in this salad, though it’s perfectly okay to add more if you like a higher tuna to veggie ratio. You can serve this as a side or an entrée, and its beautiful colors make this a lovely salad to bring to a party or potluck. And it’s one of those perfect make-at-work lunches since it takes almost no time to make. Here’s the incredibly simple recipe!

PS – I took this picture outside yesterday, hence the awesome lighting!

Mediterranean Style Tuna Salad (serves 4 as a large side; total cost per serving: ~ $1.60)

Chop all veggies into 1” chunks and place into a bowl. Drain the tuna of its water and add it to the veggies, followed by the baby spinach. Crumble the feta onto the rest of the ingredients and toss lightly until everything is completely coated with the feta. Check for flavor; you probably won’t need much salt since the feta has plenty of its own, but add salt & pepper if needed. Serve with a side of pita bread or on its own, and enjoy!