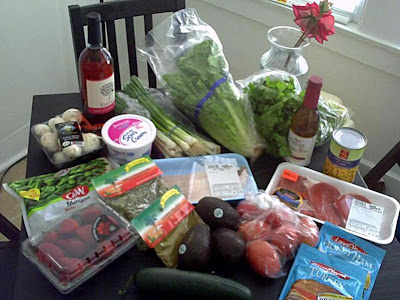 Though I had every intention of heading out to a much more expensive store for this edition of The $25 Shopping Cart, life, as usual, got in the way. So instead of heading to the spendy store, I hit up my local outlet grocery store: Food Source. Or as I lovingly call it, Ghetto Superstore (it's in Oak Park, which Sacramento locals know is pretty much the hood, hence the name. Only problem with this nickname is that I always end up singing "Ghetto Superstar" for the rest of the day and it's rather vexing. But I digress...).

When I first moved to Sacramento, I had no idea which neighborhoods were good or bad (I just knew I wanted to be Downtown or close to it), so unfortunately, I did end up living in Oak Park for 6 months. This made me become very familiar with Food Source, as it was the closest grocery store in the area, and since I've always been rather frugal, I was also drawn to their low prices. Part of the Raley's family of grocery stores, Food Source is the "outlet" store, featuring no swank decor and a bag-your-own-stuff checkout process. These two things alone must drastically cut down on their overhead, thereby passing down those savings to the customers, and as much as I like pretty places & things, I applaud these stores for getting down to basics (who really needs earth tones & ambient lighting in a grocery store anyway?). It had been a long time since I'd gone to my ghetto superstore, since I primarily shop at Trader Joe's or Safeway. But TJ's isn't always close enough when I'm feeling really lazy and though it's the closest to my apartment, Safeway is never cheap enough when I'm feeling lazy and frugal. Since it's only a couple miles away, I find FS to be a great alternative store, with a built-in workout to boot.
Since I hadn't been there in awhile and the early morning rush of shoppers was over, I took my time winding through almost every aisle, scanning everything and marveling at things like the amount of junk food out there, how brand name packaging has changed, and how expensive cereal has gotten, even at a low-priced store such as this one (the most I pay for cereal at TJ's is $2.99). Keeping in mind the bare bones staples and other food I already had at home, I shopped more for produce than anything else and was delighted to score 2 bunches of cilantro for just $0.50, 3 bunches of green onions for $1, and 3 avocados at just $0.98/each (I'd originally grabbed 5 but realized I'd be spending 1/5 my budget on avocados alone; very tasty but not very wise). Very rarely do I check their meat & seafood sections, but I thought I'd give them a shot and really lucked out! I was able to get some beef medallions for just $2.76 and a lovely Red Snapper filet for just $3.51. These, some White Zinfandel, and my random find of Marsala cooking wine were my splurges for this shopping trip. Here's the rest of the list:
1 bottle Tisdale White Zinfandel - $2.50
1 bottle Marsala Cooking Wine - $2.99
8 oz. package of white mushrooms - $1.98
1.3 lbs roma tomatoes - $1.23
3 avocados - $0.98/each
2 bunches of cilantro - $0.50
3 bunches of green onions - $1
1 cucumber - $0.50 (!!!)
1 (giant) head of Romaine lettuce - $1.18
1 pint fat-free sour cream - $1.88
Red Snapper Filet - $3.51
Beef medallions - $2.75
1 small red bell pepper - $0.55
16 oz. package of fresh strawberries - $2.28
1 package whole oregano - $0.88 (!!!)
1 package ground cumin - $0.88
Honey Ham & turkey slices - $0.50/each
Can of corn kernels - $0.68
Frozen edamame - $1.58
And cat food and a couple household items.
With the kitty food and cleaning sundries, I did get up to $33 for the entire cart of goodies, and I admit I went a couple bucks overboard because of the taxable items, but overall this shopping trip remained in the $28 range. Not bad for all the random stuff I ended up getting, including wine, fresh fish and beef! I was a little disappointed that I couldn't find any asiago cheese there for tonight's dinner, so I do have to head to the Co-op for that, but I suppose I was deluding myself just a little bit when I thought they might carry it (c'mon, they had prosciutto!). Otherwise, it was another successful shopping trip and I got a 4.5 mile walk out of it, too. Gotta love multitasking. :)