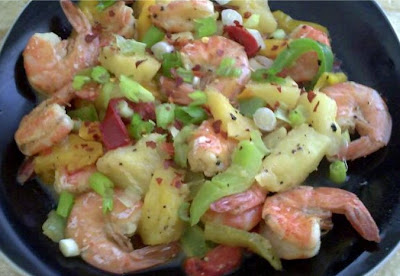 I seem to be on this pepper kick lately. I’m not surprised, since I have a tendency to obsess over certain ingredients for a few weeks (or months… remember the cheese problem? I’m so glad to be cured!). Though I’ve never been a fan of green bell peppers, I do love all the sweeter ones like red, orange, and yellow peppers. I love their bright colors, their light but distinct flavors, and most of all, I love that they don’t seem to take over an entire dish like their green cousins can. Instead of dominating a dish with their flavors, the sweeter bell peppers add just a little something extra, and that is what I was looking to do last night when I was trying to figure out what to have for dinner.

This was another one of those fly-by-the-seat-of-my-pants dishes that I hadn’t even planned on having – or creating. I was thinking of working on a couple older recipes I’ve been meaning to post, but due to my limited decision-making skills, I couldn’t decide which one to make. All I knew was that I wanted something with peppers in it. Out of frustration, I decided to make something up instead, and I truly love it when that happens. Some of my favorite dishes have come about this way, and it’s always fun to see what happens when you play with your food (in a non-food-fight way, of course). This time I figured I’d play with those beautiful large shrimp that I’d scored at Whole Foods on my last $25 Shopping Cart run.

I cook shrimp all the time and have a couple tried & true recipes in my arsenal, but I haven’t really done anything new with them in quite some time. I thought the red, yellow, and green pepper blend from Trader Joe’s would go nicely with the shrimp (I always choose the bags w/the fewest green peppers), but I wanted a kick of sweetness as well. I had some frozen pineapple chunks and decided to make a little relish out of the two, along with plenty of fresh garlic for extra flavor. I ended up with a light, yet flavorful summer dish that works well both as an appetizer and a main course when served over rice or noodles. If you’re not a fan of having to peel your shrimp once they’re cooked, go ahead and peel them ahead of time. The only thing you need to watch is that you don’t overcook them, since they can become tough and chewy. However, if you’re serving this as an appetizer, it’s more aesthetically pleasing to leave the peels & tails on. Other than that, I don’t have much to note! This is quick, delicious, and very inexpensive, yet it will still make you look like you’ve spent either a ton of money or a lot of time in the kitchen. But don’t worry, your secret’s safe with me. :)

Shrimp with Warm Pepper-Pineapple Relish (serves 2 as an entrée, 4 as an appetizer; total cost per entrée serving: ~$2.95)

Heat 1 T olive oil in a medium skillet over medium high heat. When oil is hot, add the thawed shrimp and quickly stir-fry until they turn pink. Remove the shrimp from the skillet and set aside on a separate plate.

In the same skillet, heat the remaining tablespoon of olive oil. Add the chopped garlic and cook for just about 30 seconds or so. Add the peppers, pineapple, and seasonings, and reduce heat to medium low. Allow the peppers & pineapple to cook for about 4-5 minutes, or until they begin to soften slightly. Return the shrimp to the skillet and cook for another minute or two. Garnish with chopped green onions and extra crushed red chilies, and enjoy!

Note: if serving as an appetizer for guests, arrange a few of the shrimp on individual plates and spoon a bit of the pepper-pineapple relish on top. It’s a little less messy this way, especially considering they have to deal with the peels! :)