What's In Store for June

It's always fun to see one's work not only appreciated, but put into practice. Some of the guys at work have started their own little club: Poor Guys Eat Good. Though it's a grammatical nightmare, I think it's super cute that they've all started to bring their own ingredients and making something, as opposed to just microwaving a Hot Pocket or going out to the roach coach for some deep fried fat with a side of lard. They started out a little oddly with a giant restaurant-size can of nacho cheese sauce and other nacho fixings (they ate nachos solidly for 2 weeks), but they've moved on to healthier fare like salads & tuna sandwiches. When I asked them what made them make the switch, they all admitted it was a huge waste of money to be eating solely from the roach coach and that they were starting to feel "fat & sluggish". They'd seen me eating better food and not waste money, and figured they could do the same.
My mission there is pretty much complete!
I just thought it'd be fun to share that little tidbit with you fine readers. Though I love creating my own recipes and sharing my School of Hard Knocks lessons with you, my main goal is to encourage everyone to make little lifestyle changes to help both your health and your wallet. These guys will probably never have Rainbow Chard & Roasted Beet Fettuccine of their own accord, or a Breakfast Tofu Scramble. But they've found their own ways to eat a little healthier and save themselves money, and they got it from watching my crazy antics in our breakroom kitchen. Now, the fact that you're all enjoying my recipes is really amazing (and flattering!), but it's so wonderful to receive emails from readers saying that they've been able to slash their grocery bills by a third, or those who have renewed their love for cooking after many long years away from the kitchen. And today I found a new little feature on PGEW's Facebook Fan Page with a ton of fan comments, one of which thanked me for posting recipes that are both budget-friendly AND good for folks with celiac disease! I try to post things that will allow people with different tastes & food philosophies to join in the fun, but I've always felt like I wasn't doing enough for folks with special diets. Now I know I'm helping those that need to be gluten-free and that is awesome to me! Hopefully I can work on foods for those of you who have other dietary concerns.
Anyway, the point of all my babbling is that the only thing in store for the month of June is just more of the same good stuff. Rather than list what I have in mind for this month in detail (though CHERRIES are playing a huge role!), and not having time to get to all of it (mini-mart meal's a-comin'!), I just pledge to bring you more great food and more tips on how to stretch your dollar as much as possible. Trust me, this has been as much a learning experience for me as it has been a creative one, so I also benefit, and I have you great folks to thank for it. Hopefully it's a little of both for you as well!
In the meantime, here are a few shots of some of the food my mom & I made over the Memorial Day weekend. I may feature some on the site at some point after a little tweaking. We shall see, we shall see. 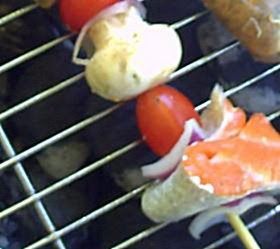 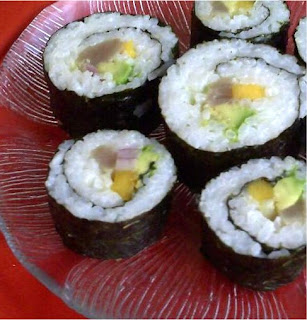 My first homemade sushi! (Not half bad for an amateur, eh?) 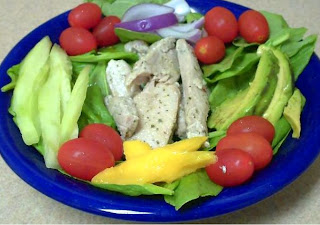