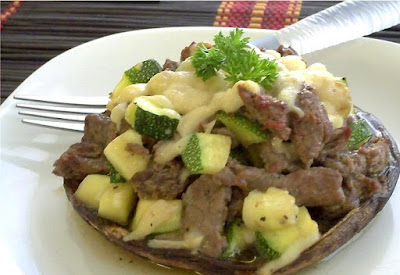 There are times when I really want to treat myself, even within my limited means. Though I received a minor financial windfall a few weeks ago (it was more like a breeze, but it still helped), I'm trying to remain as miserly as always, since money doesn't last forever, especially nowadays. However, I insist that this is no reason to ignore the desire for a delicious dinner. As I've shown you for almost a year now (can you believe it?), just because you're lacking copious amounts of money, doesn’t mean you have to be stuck with boring food. Today was a rather stressful day at work, so I wanted to let myself unwind with an old movie and a nice dinner. Though I'd originally planned on having something different (it will be the next recipe, so stay tuned), I couldn't resist the call of the lovely Portobello caps that I'd scored at Safeway when I was picking up kitty food yesterday. I also had a little flat of stir-fry cut steak that I knew I needed to use soon and thought I could make something of the two. Still, I needed another vegetable, something a little less dark & smoky looking, something with a little more crunch. Fortunately, my boss's wife had brought in some great zucchini from her garden, so I had all the starring roles of this dinner cast to perfection.

I love stuffed mushrooms in most forms; I've just never taken the time to play around and make my own. I remember it being a very big deal whenever my mom started making her special version of them, but those were usually served as hors d'oeuvres because they were made with regular white mushrooms. With my giant portabella caps, I knew I could make a meal out of them, and trust me, you will get full with one of these and a small salad. Rather than sticking with the traditional bread crumb & cheese mix, using some well-seasoned steak and some fresh zucchini makes this a healthy, hearty meal. A small amount of parmesan cheese gives the whole thing a sharp & nutty kick as well. Not a meat eater? Stick with the zucchini & parmesan, add a couple of extra veggies if you like, and you’ll have an equally delicious, filling meal.

Of course, the best part about these is the price. Let’s face it: portabella dishes are aren’t always that affordable if you’re eating out, and some recipes that include these great mushrooms may look delicious, but can really hurt the wallet because of the pricey ingredients. But as with many of my recipes, you can save yourself quite a bit of time and money by making use of any leftovers you may have. Steak and zucchini both make it on the tables of many people at some point during the week, so if you have any leftovers, be sure to keep this recipe in mind for a great way to use them. And even if you did buy all the ingredients just to prepare this meal, the cost per serving is relatively low and you will have plenty of those same ingredients to use for other meals. Remember, doing it yourself is not only great to get those creative juices flowing, it’s wonderful for the pocketbook!

Preheat the broiler. Season the steak with the salt, pepper, cumin, and paprika, and grate the parmesan cheese. Set each aside. Spray a medium skillet with cooking spray (I use either olive or canola oil sprays) and add the garlic. Heat over medium high heat until garlic begins to turn fragrant, followed by the cubed steak. Quickly stir fry the steak for no more than 2-3 minutes. The pieces will still be pink inside, but because these will eventually be broiled, you don’t want to end up overcooking. Remove from heat & cover.

Lightly brush the bottoms of the Portobello caps with olive oil and place gill side down on a foil lined baking sheet (easier clean up!). When broiler is ready, pop the mushrooms inside and broil for about 3 minutes. Turn the mushrooms onto the other side, brush with a bit more olive oil, and season very lightly with salt & pepper. Broil for another 3 minutes. While they’re broiling, combine the cooked steak, zucchini, and 1/2 the parmesan cheese in a medium bowl and toss together until combined. Remove the mushrooms from the broiler, spoon a generous amount of the steak & zucchini mixture onto each one, top with a bit more parmesan cheese, and return to the broiler. Broil for another 4 minutes or so, or until the cheese has melted and is just beginning to broil. Remove from broiler and allow to cool for a couple minutes before serving. Garnish with a bit of parsley, serve with a nice salad, and enjoy!