Remember how excited I was to do the Whole Foods edition of The $25 Shopping Cart? For some reason I was confident and totally jazzed to prove that I could tame the expensive Whole Foods beast, and I was very pleased when I actually did it. But as excited as I was to do that one, I was equally nervous to do this edition, featuring none other than the Sacramento Natural Foods Co-op. Perhaps it's because I still have issues with this store. 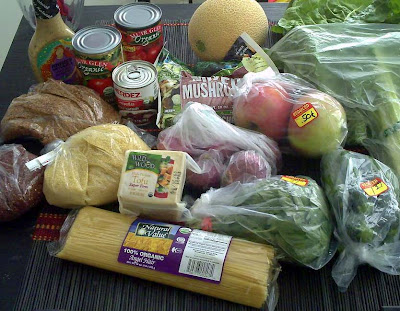 Now, I talk about going to the Co-op all the time, partly because I love stores that are not intimidating with their giant aisles of cartoon-packaged processed foods, and partly because it's a mere 6 blocks from where I live. Proximity of certain stores is a huge factor for those of us who are vehicularly challenged. Some folks joke that I live at the Co-op almost as much as I do at Trader Joe's (and lately it's been more so because it's just been too hectic around here for me to head to my beloved TJ's). But I have to admit that it kinda scares me to shop there sometimes. Though I haven't lived in Davis for about 5 years now, I still feel more comfortable at that Co-op than the one here in Sacramento, and I think it's because of the generally laid-back attitude; I find the workers and clientele at the Sacramento one to be a bit on the pretentious side, actually, and that sometimes deters me from going. It scares me to shop there because of the very expensive organic produce that's being sold there, when I know I can get equally good, organic produce at the farmers market for a lot less. And it scares me to shop there because I just don't think it's right to pay $12.99 for a jar of almond butter when I know I can get the same quality & goodness from my $5.99 jar at Trader Joe's.
However, not everything at the Sacramento Co-op is scary. I have definitely come to appreciate it a lot more over the years, now that I've gotten around the snotty floor staff (the cashiers are great, though) and the Don't Even Go There aisles. Their bulk section is incredible, and I'd put it up against the Whole Foods bulk section any day, not only because of their selection but their prices, too. I find the best quality and most affordable tofu at the Co-op (though the Davis one DOES beat it because of its bulk tofu that costs next to nothing), and I've mentioned many times how amazing their deli is. But my new favorite part has to be my recent discovery of the reduced-price produce area.
I don't know if I had just missed it before, since I usually skip their produce section because of the prices, even if everything looks lovely. Carefully tucked away out of most people's view in a stand-alone refrigerated case, under the dates and organic herb mixes lies a pile of produce that almost looks like it's been forgotten. Upon closer inspection, one finds the exact opposite: this produce has been carefully selected to be individually packaged and sold at a reduced price because it is no longer perfect for the shelves. You know the type: the apple with one small bruise, the zucchini that may have been mishandled a few times, etc. It's perfectly good produce and should definitely be eaten as opposed to wasted, it just doesn't look as pretty for the shelves. I think of it as the Co-op's own response to the freegan movement and I am a big fan of this. Too many folks shy away from the not-so-perfect tomato or the slightly wilted lettuce heads of the world because they are not aesthetically pleasing enough. Sadly, a huge amount of food is put to waste because of this superficial attitude towards food, and before I launch into a social tirade about this issue, I will just state that I think more stores should offer this type of deal so that more folks can enjoy decent food.
Anyway, since I got up so early for a Sunday and felt I was still decently stocked from my last trip the farmers market, I thought it would be a good day to attempt the $25 Shopping Cart at the Co-op. Armed with the strategy to stock up on some bulk items and hit the reduced produce area, I figured I might be able to score a few good deals. Once again I went a couple bucks over (maybe I should change it to the $30 Shopping Cart? Nah... doesn't flow as nicely), but for just $28.54, I think I did a great job and was able to score the following:
~ 1 2.5 lb cantaloupe @ $0.69/lb
~ 1 small bottle of Annie's Naturals Goddess Dressing - $2.49 (on sale)
~ 1 can whole chipotle peppers in adobo - $1.69
~ 1 can Muir Glen Organic Diced Tomatoes w/Onion & Garlic - $1.99
~ 1 can Muir Glen Organic Roasted Tomatoes in Adobo - $2.19 (total impulse purchase but I can't wait to use these!)
~ 1 10 oz. package extra-firm tofu - $1.69
~ 1 package frozen organic mixed mushrooms - $2.39 (on sale)
~ 1 package organic angel hair pasta - $2.99 (on sale)
~ .9 lb small red onions @ $1.29/lb
~ 1 giant bunch of organic Swiss chard - $1.99
~ REDUCED PRODUCE: 1 bunch fresh organic basil - $0.89 (seriously!)
~ REDUCED PRODUCE: 8 organic baby zucchini - $1.39
~ REDUCED PRODUCE: 2 large Braeburn apples - $0.50 (for both, not each!!!)
~ .85 lb organic golden flax seed - $1.82
~ .60 lb organic red quinoa - $2.25
~ .92 lb organic cous cous - $1.74
~ Refill on my 1/2 gallon jug of H20 (yes, I really do drink that much water, and usually a lot more) - $0.20
Not bad at all! I already plan to make a yummy stir fry with my chard, mushrooms, and tofu (might do that tonight, actually), and I know I will find some good uses for the tomatoes & chipotles in adobo. The basil will probably turn into pesto later today, thereby extending its short life rather than wasting it because it's not perfect; and the apples I will probably use for my next brunch. It took careful scanning of prices, but even at the "nut & twig hippie food stores" (thanks to my friend, Rich, for that term, lol), a $25 Shopping Cart is possible!