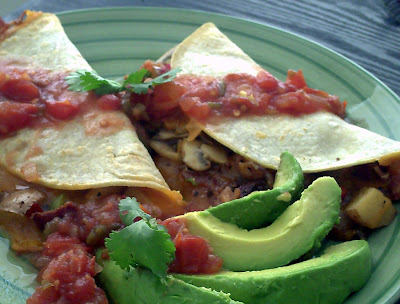 I'm sure you've all noticed that my horrible cheese addiction is finally under control. I am now able to leave Trader Joe's without 3 different types of cheese (it's just not normal for a single person who lives alone, though it's not like I ate them all at once). However, this doesn't mean that I don't like to indulge in some delicious meltiness every now & then, and today I decided to succumb to said indulgence.

I'd originally wanted to make a giant breakfast burrito for myself, the kind that is so huge it not only qualifies as brunch because of the time of day it would be eaten, but because it's filling enough to count as two meals. Sadly, I haven't had the chance to head to the store for some eggs lately, so that plan was scrapped. Undaunted, I decided to modify my brunch plans and make myself a hearty breakfast quesadilla. I figured it would be also be a good way to bring a new recipe to those of you who have requested some eggless options here & there. Though I prefer having eggs in some form during brunch time, it really isn't necessary, and it's always a nice change to try something other than omelettes or French toast (though I love the two quite a bit!).
Though I used bacon in my quesadillas, feel free to omit the bacon or substitute ham or sausage if you like. I usually make this sort of thing without meat and it's equally delicious, so definitely give that a try. Just note that if you are using bacon or fresh sausage, do NOT use more oil or grease! There is more than enough that is released by these products (which makes this one of the least healthy recipes on PGEW, but it's always good to be bad every now & then), so resist the urge to use oil, butter, or anything like that. This is also a great option for a Breakfast For Dinner night, if you do that in your household. You can serve this with any number of sides & sauces, like Pico de Gallo, guacamole, sour cream, or your just your favorite jarred salsa (I used Herdez's Salsa Casera on mine), and I'm fairly certain this would also taste great with some spinach or other hearty greens. Play around with it! I know I will be doing so in the next few weeks. This one was really good! :)
Eggless Breakfast Quesadilla (serves 4; total cost per serving: ~$2)
4 corn (or flour) tortillas
6-8 strips of lean bacon
8 small red potatoes, cut into 1/2" cubes
1 small red onion, chopped
8-10 white button mushrooms, sliced
Salt & pepper to taste
1 1/2 c cheddar cheese, shredded
1/2 c red, yellow & green pepper strips
Avocado & cilantro for garnish
Pico de Gallo or your favorite salsa on the side
In a non-stick skillet, cook the bacon as you normally would (I like mine more meaty than crispy, but feel free to cook it as you like it). When bacon is cooked, remove from skillet and place on a plate lined with a couple of paper towels, in order to absorb the excess fat. If there is too much bacon fat in the skillet (more than 1 T), drain it away until you only have about 1 tablespoon. Add the cubed potatoes and fry them over medium high heat for 4-5 minutes, or until they start to brown on the outside and become slightly tender on the inside. While potatoes are frying, chop the bacon into small pieces. Add the chopped onion to the potatoes. Sautee for about 1 minute, then add the sliced mushrooms and pepper strips, sauteeing for another minute or two. Remove from heat & cover.
In a separate skillet sprayed with a small bit of cooking spray, quickly heat the tortillas on each side. Take each individual tortilla, add about 1/4 of the shredded cheese, and allow to melt for a minute or so (the easiest way to do this is to cover the pan; the steam will help the cheese melt faster). Add a large spoonful of the potato, bacon & veggie mixture to the quesadilla and fold in half. Flip onto the other side and cook for about 1-2 more minutes, or until the cheese is completely melted.
Slide onto a plate and garnish with sliced avocado and fresh cilantro sprigs. Add salsa, guacamole, or whatever your favorite sides may be, and enjoy!