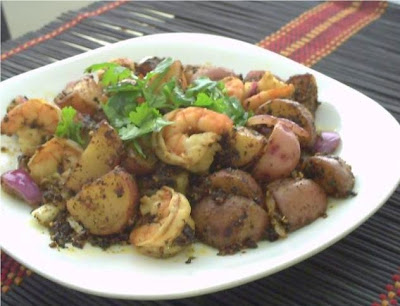 Once again I’m obsessed with a certain food, and this time around my victim is the red-skinned potato. My last couple of treks to my favorite farmers market has resulted in some great deals on the baby red potatoes ($0.75/lb!) so this has probably contributed to my current obsession. Though I’ve never met a potato I didn’t like, I’m rather partial to the red potato because of its smooth texture and the distinct flavor of its skin. While some of its other potato cousins can only handle being baked or mashed, this is a rather versatile root, lending itself well to salads, soups, sides, and a slew of other recipes. As is usually the case whenever I’m into a particular food, I will probably end up posting a few more recipes featuring this lovely little root, so bear with me.

In regards to this recipe, I threw it together over the weekend when I was feeling a bit tired and not all that creative in the kitchen. I figured a quick stir-fry or scramble would be nice to have, but I really, really wanted my little red potatoes and poked around to see what I could add to them. I had a few frozen shrimp that were threatening me with potential freezer burn if I didn’t use them soon (odd, since I usually eat shrimp regularly; I guess I’ve been neglecting them lately) and liked the idea of putting them together with a nice blend of herbs for a hearty little dish. I also wanted to take advantage of my latest Foodbuzz.com Tastemaker Program care package, which included a variety of products from Emeril Lagasse, so I thought this was a good way to start making use of some of his signature Essence.

If you don’t have Emeril’s Essence at home, or if they don’t carry it at your local grocery store, do not fret. Though the ratios may be different, it’s very easy to recreate (and fun to play around with its flavoring while doing so). I used dried herbs as opposed to fresh ones for this dish, not only because of the lack of the fresh kind in my fridge, but because the way this is cooked lends itself more to the versatility of dried herbs. The last thing I have to note is that this is one of those fabulous I Can Be A Side Or An Entrée dishes, so don’t feel bound to having it all by itself for dinner! I paired mine with a nice side salad, but this would make a great side or appetizer for a larger meal. And now for the good stuff. :)

Rinse and scrub the potatoes well so that there any lingering dirt is removed and cut into quarters (if using larger potatoes, cut into 1” cubes). Place the potatoes in a large bowl, add the Essence and dried herbs and toss together well. Heat the 2 tablespoons of oil in a large skillet over medium high heat. Add the garlic and sautee for about 1 minute, or until it just begins to brown. Add the potatoes and cook for about 3 minutes uncovered, stirring well. Cover and cook for another 3-4 minutes, or until they begin to soften. Add the last tablespoon of olive oil (if needed; if you like less oil, don’t add as much), the shrimp and the diced red onion, and cook until the onion barely begins to soften and until the shrimp are heated through (if using fresh shrimp, cook until pink and add the onions afterwards).

When ready to serve, garnish with fresh cilantro or parsley, serve with a nice salad, and enjoy!