Well, here it is. My birthday. Today I turn 33 and I have no clue how I got here so fast. I remember it seeming like an impossible age to be, and here I am, feeling just like I did when I was 19 (only with slightly sorer joints). Things aren’t perfect, but then again whose life is? I have a lot to be thankful for, though: I have my little site and all you awesome readers, I have my health, a great new job, some pretty great friends and family; life's not too bad. Since most of my friends and family are nowhere near me, and not having a special guy in my life to spoil me on my special day (which also means I have no man-headaches, so WOO HOO for singlehood! But I digress.), I figure it falls upon me to spoil myself rotten today. I have decided to start with a sinfully delicious breakfast. 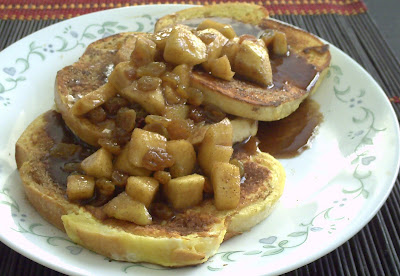 I've been craving French toast for awhile now, but without eggs it has been impossible to indulge in it. Taking advantage of the first relatively free weekend in a long time, I went to a few different stores last Sunday and took care of the eggless problem. I'm sure the basics of the recipe I've tweaked & improved over the years are similar to many other French toast recipes you may have encountered over the years, though I do like to add a couple things to mine. My finished product always has something sweet on top, but I also like for my actual toast to have a little bit of flavor, so I add vanilla and a bit of cinnamon to mine. Growing up, my mom usually topped my French toast with butter & cinnamon sugar as opposed to maple syrup (SO good!) and I still like serve mine that way these days. However, I wanted to add a little something extra today, and the cinnamon apples & raisins seemed like they’d go perfectly with my already cinnamon-y French toast.

This is one of those rare PGEW moments when I post a recipe that is not somewhat healthy, so indulge in the sinfulness! I did make a slight effort to reduce the sinful factor by using non-fat milk and some egg whites in my egg mixture, but otherwise this is a rather rich breakfast. Howerver, this is a special occasion; it’s not like I eat breakfast like this everyday (in fact, those three pieces in the photo will probably be my breakfast for the rest of the week, they’re so filling!), so a little indulgence is okay every now & then. Just remember this when serving, so that you don’t inadvertently give yourself or your guests a serious blood sugar spike. If you have thick cut bread, by all means use it! I only used what I had available to me this morning, but French toast is always better when the bread is nice & thick. And if you’re a raisin-phobe, feel free to skip them. I just happen to love how raisins, apples, and cinnamon all go together like they’re food soul mates. :) Anyway, I’m forgetting the best part about this! The low low LOW price per serving of about $1.33! Usually one would pay about $8 for a few slices of dried out French toast at your local greasy spoon. This French toast is moist, tasty, and not at all like what you’d find in restaurants, so you can’t beat that when coupled with the price! I hope you enjoy this as much as I did. Though I would have preferred to serve mine with a candle… oh well, there’s always this evening’s happenings!

Combine the cinnamon & sugar for the cinnamon apples and mix until thoroughly combined. Chop the apple into ½” cubes and place in a bowl along with the raisins and the lemon juice (this protects the apple against discoloration). Add the cinnamon sugar mixture and toss everything together well. Melt the butter in a small pan and add the apple mixture (including all the cinnamon sugar!). Sautee lightly until the apples soften slightly and the raisins begin to plump. The fruit will create its own syrup. Remove from heat and set aside.

In a separate bowl, combine the eggs, egg white, milk, vanilla, and cinnamon, and whisk together vigorously. Heat a medium skillet sprayed with cooking spray over medium high heat. While skillet is heating, dip one slice of bread in the egg mixture, making sure both sides are completely coated and that the bread slightly absorbs the egg. Place the bread in the skillet and heat until the bottom begins to turn a golden brown and the edges begin to dry a bit, about 2-3 minutes, depending on the thickness of your bread. Flip onto the other side and cook in the same manner for about another couple of minutes. Remove from heat and place on a covered plate and cook the rest of the French toast.

Place a couple slices onto a plate, spoon a generous amount of the apples & raisins along with plenty of fruity syrup, and enjoy!