Back in the day my dad was rather up there in the Southern California restaurant business scene. He schmoozed with the Beverly Hills Country Club types as a result of his cooking, and got folks like the owner of the Acapulco Mexican Restaurant chain not only to make him corporate manager, but to become my godfather, too. 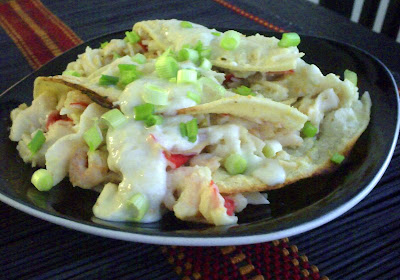 The following is a recipe that my godfather and my dad created together. Very rarely did we encounter an occasion special enough to warrant making these fabulous enchiladas, but I do recall them being seriously delicious. Unfortunately, when I was a kid my daddy was not as willing to have little hands help him in the kitchen as my mom was, so I didn’t really get to watch him cook as much as I would have liked, especially when it comes to this dish (though it was kinda cool when awesome food just magically appeared out of nowhere). I’d been craving these for quite some time and knew the basic gist of the recipe, but I wasn’t 100% sure I’d be doing this right. After some major Daddy’s Girl style persuading, I managed to convince him to part with a modified version of the recipe (apparently the “real” thing must always be a secret), which I’d like to share with you today.

This doesn’t sound like it could qualify as a Poor Girl recipe; in fact, I didn’t even think it would make the cut in terms of cost. However, I was very pleasantly surprised to know that not only is this über-affordable, if you have too much in the way of filling, you can actually make two completely different meals (more on that later). Now, my dad wasn’t that good about giving me some rough measurements for this (not that I blame him; we’re the type that just throws food together in random quantities until it tastes good, so strict measuring does not run in my family), but I managed to come up with a good ratio of ingredients so you could all recreate this affordably. I don’t expect anyone to have affordable access to real crabmeat but if you do, use it! It can only make this taste better. Whatever you do, try to resist the temptation to use flour tortillas in this dish. Though I prefer flour to corn, using the wrong tortilla will not only change the dish structurally, but tastewise as well. There is something about the combination of flavors that truly lends itself to using corn tortillas, so if you’re a flour tortilla lover like me, exercise some restraint and you’ll have fabulous results.

Now, I’d mentioned that this becomes really, really cheap if you go the two meal route with this one. This filling not only works in enchilada form but makes an incredible omelette filling, too. All you would need to do is add the filling and some of the sauce into the omelette, finish cooking, and add extra sauce when serving/garnishing. As long as you and your family are not easily bored, it is quite feasible to have the enchiladas for dinner one night and have the omelettes for brunch the next morning. Your sides can vary depending on the meal to keep things interesting, but you really can make two fabulous dishes from just one recipe. The choice is yours! And if you do end up making both recipes sometime, I’d love to hear which one you liked better! I think it’d be interesting to know what everyone preferred (and my dad was curious anyway, haha).

Preheat the oven to 375 and spray a square baking pan (preferably glass) with cooking spray. In a large bowl combine the sour cream and 1/2 the jar of salsa verde (roughly 4 oz.), and whisk together until completely combined. Reserve about 1/2 cup of the finished sauce in a smaller bowl and set aside. In a separate bowl combine the crab meat and bay shrimp with the remainder of the salsa verde and mix together well.

Take each tortilla and dip it into the large bowl with the sour cream & salsa mixture, making sure both sides are coated evenly but lightly. Fill the tortilla with the crab & shrimp mixture, sprinkle with a bit of cheese, and roll together as tightly as possible without breaking the tortilla (this is a little tricky but it gets easier with practice). Place into the baking dish and repeat until each tortilla has been filled. Drizzle any extra sour cream & salsa mixture on top, cover with aluminum foil, and bake for about 20 minutes. Remove foil, sprinkle any extra cheese on top and bake for another 5 minutes. Allow to cool for about 10 minutes before serving.