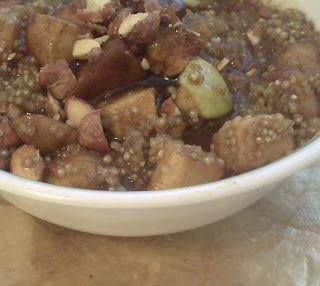 I’m not sure why, but the 3rd day of the Hunger Challenge was tough for me. Everything started out just fine: I decided to cook a big batch of quinoa in the morning so that I could make different meals with it throughout the day. I’m sure some of you have noticed that I’ve done that with different ingredients this week, like the ham from Day 2, etc. This can be a very good way to help keep costs down while experimenting with different foods. Sure, having the same type of food all day long may seem boring at first, but it forces you to get creative no matter what.

I happen to love quinoa and everything about it, so it was easy for me to use this as my base ingredient. A lot of people have asked me why I use such an “expensive” ingredient if I’m so broke. That’s because quinoa is not that expensive if you buy it in bulk and consider how much it yields. I used one cup of dry quinoa and was able to get about 2 ½ cups of cooked product. Because cooked quinoa also fluffs up well like cooked cous cous, you end up with quite a bit of it when all is said and done. From that one cup – which costs anywhere from $1.25 to $2, depending on where you buy it – I was able to make 3 different meals and still have leftovers to make more dishes later on. Even at the $2/cup price, if you’re able to make 3 meals that can make at least 2 servings, you can see how cost effective eating quinoa can be. The biggest bonus (aside from how versatile it is) is the fact that it’s nothing but easy calories & nutrition! That’s a way better deal than any Twinkie, Pop Tart, or other scary, overly processed junk food you can find! When you think about it in terms of something like the Hunger Challenge, you can see how eating quinoa is actually a very good option for those who can’t afford to spend too much on food. 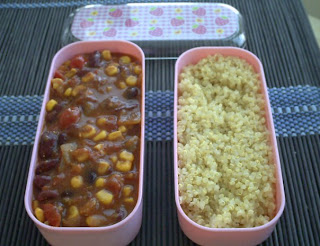 For breakfast, I returned to my first recipe post of 2009, Warm Breakfast Quinoa with Cinnamon Apples & Almonds. Though it’s quite sweet, it still packs some good nutrition from the apples, almonds & quinoa. At lunch, I combined leftover Chipotle Corn Chili from Day 1 and added it to about ½ cup of quinoa (which really helped calm the heat of the chili!). And for dinner, I got all sorts of creative with the tiny amounts of frozen veggies left in my freezer and made a nice little seitan stir-fry that was also served with quinoa. Each meal was $1.25 or under, making my daily total just $3.55!

HOWEVER………….. Poor Girl’s slight case of hypoglycemia started to kick in around 3pm and by the time I got home from work I was cranky and a little woozy. So I succumbed to temptation and ate an entire pack of that super thinly sliced turkey. It has about 10 paper thin slices in a pack and is only 90 calories for the whole thing, so it’s not entirely evil. But it cost $0.79! :( It made me go over my budget by 34 cents. *sigh* 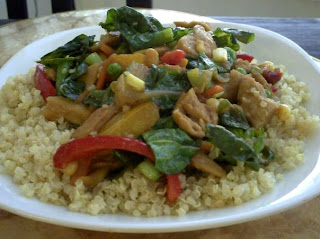 This really made me wonder how those who have similar medical issues but not enough money get through the day. When I worked at crisis houses for people with mental illness way back in the day, I had several clients who had physical health issues like hypoglycemia, diabetes, etc., which were sometimes hereditary but a lot of times due to their psychotropic medications. Making sure they ate decently was easy for staff members to do because the crisis house provided their food, but when they went back to living on their own, their tiny SSI stipend (and lack of knowledge on the matter) made it very difficult for them to eat right.

Once again, even if Poor Girl is constantly struggling, this hunger challenge really puts one into hypermode, magnifying everything that real hunger can bring about. I know I will be far more conscious of these matters from now on!