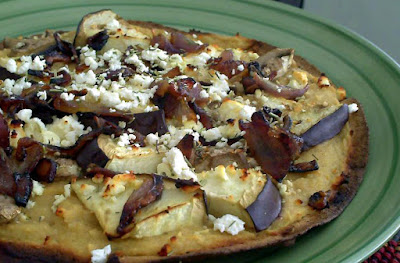 Oddly enough, there has been a severe lack of hummus in Poor Girl’s fridge lately. An oversight for the past few weeks, I had finally had enough of my accidentally self-imposed hummus fast and picked some up at Trader Joe’s while I was there to get StuKitty’s beloved Tuna for Cats (kitties love Trader Joe’s too!). I got my industrial size tub of course, as the value is much better ($2.99 for 8 oz. vs. $3.49 for 16 oz.), and because one can never have enough hummus. After digging in with a few carrot sticks, I set about making a giant H.S.A.T. for old time’s sake. But like a bolt of lightning, inspiration struck me hard and I decided to switch gears and have a hummus pizza, which I haven’t had in a long time.

The beauty of pizza in general is its versatility. From regular red sauce to pesto, creamy garlic sauce to barbeque sauce; from pineapple to Italian sausage to artichoke hearts – you name it and it will probably top a pizza. This opens a world of possibilities to the creative and the picky, and I’m sure you all have your own favorite combination of flavors for your pie. Using hummus as the “sauce” or base for a non-traditional pizza is always a fun alternative since it allows you to kill two birds with one stone: flavor & nutrition. Often times it’s hard to pack a bit of protein into a pizza without loading up on the fat. Hummus will definitely give you some protein while offering a delicious base to build on. You can add almost any veggie topping you can imagine and it will taste great (good way to use up leftover bits of vegetables instead of letting them go to waste!). Since I cannot get enough eggplant these days, I decided to combine that with some mushrooms, caramelized onions and feta for a nice, light dinner.

It occurred to me while making this that one could make a few of these in advance, wrap them individually in plastic wrap, and pop one in the oven whenever you’re in a hurry for a quick, healthy meal. I’d be interested to see if this works well in the freezer too, since I’ve never frozen hummus before (if you have and gotten good results, let me know!). However, I do advise doing this for other more traditional homemade pizzas if you have some time. It’s a great way to get the family involved in the dinner-making process; it solves the problem of meal planning for at least one or two meals of the week; and is a far healthier & more cost effective alternative to delivery or frozen pizzas. Made ahead of time or on the spot, I’m sure you hummus & veggie lovers will like this one as much as I do.

Preheat oven to 425. Spread the hummus onto the tortilla in a thin, even layer. Arrange the eggplant and mushrooms on top, followed by the crumbled feta. Place on a cookie sheet and bake in the oven for 12-15 minutes, or until the eggplant has lightly roasted and the feta has begun to melt. Remove from oven, top with caramelized onions and extra feta, sprinkle with rosemary, basil, or your favorite dried herb mix, serve with a nice salad, and enjoy!