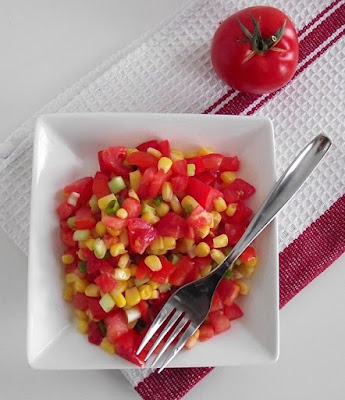 I've been a bit under the weather the past couple of days (I'll spare you the gory details) and haven't been too into the idea of cooking for myself. However, my frugality usually overcomes my lack of motivation when it comes to these things, and instead of ordering some take out, I figured I'd hobble to my kitchen and make myself something relatively healthy to go with some leftovers. As I peered in my fridge I saw I still had like a basket & a half left of organic grape tomatoes that needed to be used quickly. I didn't really feel like getting into anything elaborate though, so I decided to add some veggies to make a quick side salad dish.

It amuses me that this is something I probably would have thrown together at work. As I was making this I giggled to myself that this was nothing but another “ingredient assembly,” that little mess of ingredients that makes me feel all guilt-ridden for not having done anything to them but combine them. 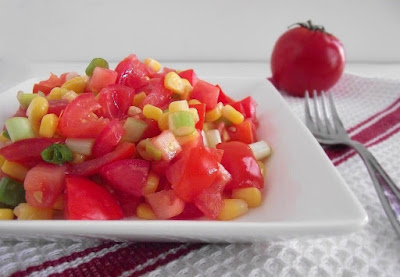 Again, this is a complete no-brainer and certainly not genius, but it’s a fabulous example of how to use produce that might go bad if not used soon enough. I know a lot of you deal with this at some point, and you may agree that it’s an unfortunate waste of money and food when you just don’t get around to using that chard; that tomato; that bunch of asparagus. It’s one of the main reasons people give me for not eating more fresh fruits & veggies: “I never use it” or “It goes bad too fast” or “No one eats it”. Putting things together in a non-traditional way and playing around with flavors will make things interesting enough even for some finicky eaters, and when it comes to the fresh stuff, it can save you a lot of money.

Granted, I've used canned or frozen corn for this dish and there is certainly nothing wrong with that. But if have access to fresh corn, or if you’ve found a fabulous deal on the fresh stuff, use that instead! The flavor will be much more distinct. It’s also not imperative to use grape tomatoes; any ripe tomato will do for this recipe. There’s not much to the dressing either; I have been known to make something like this with only a couple dashes of my favorite Italian dressing, so if you can’t make the dressing in the recipe just use what you have! Cilantro-phobes, just omit the cilantro and you, too, will be as happy eating this as everyone else. :)

Prepare the dressing by combining the last 5 ingredients and whisk together well. Combine the sliced tomatoes, corn, chopped green onions and chopped cilantro in a large bowl and toss together. Add the dressing and mix well. Refrigerate up to an hour, serve by itself or as a nice side, and enjoy!