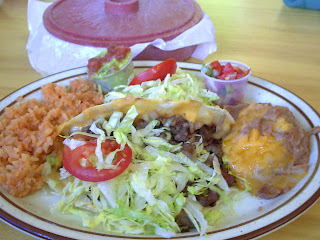 My new job has been going pretty well so far. Though it's definitely an adjustment, I am thoroughly enjoying all the new things I'm learning, as well as finally being able to use my multilingual abilities in the workplace (and get paid for them, lol). I also love my new commute of just a 10 block walk to and from work, as opposed to my former commute of about 2 hours each way. I vary my route every day just to keep things interesting, but I inevitably find myself passing by Pancho's Cocina Mexicana everyday, as it's really close to where I work. I'd seen it plenty of times before but never really bothered to go in since I was always on my way to someplace else. Seeing as I pass this place every single day now and am sometimes too rushed to remember to pack my lunch for work, I thought it was high time to try what I've been told is a "pretty good little restaurant."

Located at 2026 Broadway, Pancho's is one of several ethnic restaurants that lines this long avenue in Sacramento. It appears a bit uninteresting from the outside as most of them do, but inside the decor is warm, cozy, and inviting, its murals and traditional Mexican accents tasteful but not overdone. The clean interior is colorful and lively, but not to the point of needing sunglasses, which I've almost had to put on in other Mexican cocinas. I also love the personal touches that they've added, like autographed pictures of Sylvester Stallone in his Rocky days; it makes it feel more homey and cozy. However, the first thing that I always notice at Pancho's is their incredibly friendly staff: they seem truly happy to see you and end up making you feel like a regular almost immediately. During lunch (I have yet to go there for dinner) you can pretty much seat yourself and your chips & salsa and ice cold water appear almost immediately in the hands of a smiling staff member. The first time I went to Pancho's and experienced such genuine hospitality, I knew I was already a fan and probably would have forgiven them for serving mediocre Mexican if that's what they actually served. Fortunately, mediocre is not the case when it comes to Pancho's.

I've only tried a few things so far and everything I have had has been truly delicious. From their a la carte quesadillas (an absolute steal for just $3.25, which includes a nice little salad) to "Pancho's Salad" (plenty of crisp lettuce and cabbage, a generous amount of marinated chicken breast and grilled mushrooms, all garnished with guacamole & salsa), the food is fresh, tasty, and light, not laden with lard as some Mexican restaurants' food can be. 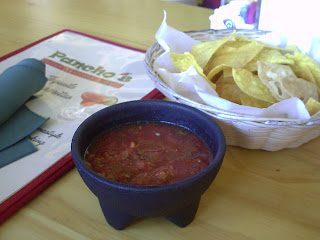 This time around I tried their Carne Asada Quesadilla lunch special, and once again they did not disappoint. Although I'm not of Mexican descent, I'm a bit of a carne asada snob; to me there's nothing worse than to be expecting deliciously seasoned and tender steak, only to be presented with tough little nuggets of blandness. Pancho's does it right and they do not skimp on the meat portion like a lot of other restaurants will. This quesadilla was cheesy without being overly so (though you know there's no such thing as too much cheese in Kimberland) and filled to the brim with hot carne asada, and the fact that they grill the tortilla to a slight crisp adds a fun texture that you don't usually find in quesadillas. All of Pancho's lunch specials are served with Spanish rice, refried beans, a small salad, and warm flour tortillas, all of which are freshly made and tasty. About the only thing that I found was lacking in flavor was their guacamole, though it's easily salvaged with a dash of salt and a bit of their salsa.

As I mentioned before, the amount of food you get - even in a lunch special - is generous almost to the point of obscene (you can tell by the picture), and I found I am actually able to get about 3 meals out of one lunch special! I had the quesadilla at the restaurant and took the rice, beans, tortillas and leftover salsa with me to make some no-meat burritos for lunch at work. Not bad for just $5.95! That's right, I got all that food for just a bit over $6 after tax. That comes just $2 for the three mini meals I was able to have out of one lunch special! Which brings me to the other "best part" about Pancho's: price & value. I can't stress just how Poor Girl friendly this place is! Their lunch menu ranges from $5.95 to $7.95, the short order items running from $3 to $5. Don't let the "short order" moniker fool you either. The first time I went there I ordered a bowl of their homemade soup ($3.25), fully expecting to get a regular sized bowl or cup. What I received was this giant bowl of delicious, hot soup, with plenty of rice and perfectly seasoned broth; probably a good 2-3 cups worth of soup for just $3.25. Other short order items like tacos de carnitas or a chicken quesadilla will come with a small salad and only cost about $3.75. A lot of local taquerias will charge you the same for just the one item, so I do appreciate that they try to give you a decent amount of veggies with every meal.

Other Pancho's perks that I fully intend to try one day when I have a slightly larger disposable income include their nice selection of sipping tequilas and glasses or full pitchers (!!!) of Mai Tais, margaritas, or Piña Coladas. They offer things like pozole during the regular work week, which is practically unheard of at most Mexican restaurants (though their menudo is only served on weekends like other places), and take very special care of their To Go customers, ensuring that their food is made fast & fresh so one can get going quickly. This is a huge plus for those of us who are pressed for time, especially during lunchtime.

Overall, I'd say you can't go wrong with Pancho's if you want tasty, affordable Mexican food that's obviously made with a lot of care & pride. I highly recommend them for lunch as you can get some incredible deals on real food for about the same price as a fast food "value" meal. Pancho's is a far healthier, tastier option, and you will always feel like you just ate an old friend's.