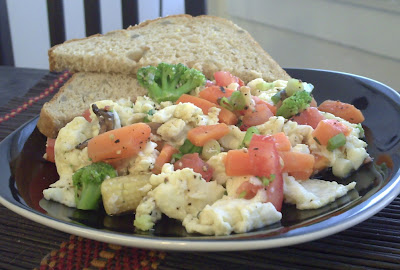 You know those mornings when you think you’ve gotten up early enough to do a few extra things around the house but end up having to rush about anyway? I had one of those today but I was bound & determined to bring something from home for breakfast so I wouldn’t have to spend extra money. Yesterday on Facebook I wrote briefly about my unplanned lunch at Andy Nguyen’s, and though it was awesome to get 3 meals out of one $7 bowl of soup (I’m still quite tickled by that fact), it was still $7 + tax + tip that I really wasn’t expecting to spend. I’m not exactly in a position to be eating out on any semi-regular basis and have some decent food options at home, so even if I had to run about like a chicken with my head cut off this morning, I was more than happy to make breakfast at home.

This is similar to my Tofu & Veggie Scramble from earlier this year, only with egg whites and a lot more veggies. The best part is that it only takes about 6-7 minutes to make, so it’s great for anyone who’s on the run! How can this be if I’m always harping about hacking up whole vegetables? Well, not everything I do is completely by hand, and during the colder months I like to have a lot of frozen mixed veggies on hand to use for soups, stews, etc. I also like chopping up extra vegetables that I know I won’t use right away and sticking them in the freezer for later use. Either one of these will lend themselves beautifully to making this breakfast. Not sure what to do with those remaining egg yolks? Whatever you do, don’t toss them! You can scramble them and use them in a nice spinach salad for lunch, or use them as a base for a custard-y dessert for dinner later on. Now let’s check this one out.

Place the veggies in a small strainer and place under cold running water to defrost quickly. In the meantime, chop the tomato & onions and place in a bowl. When the frozen veggies have defrosted, drain well and add to the tomato & onion mixture. Add the salt and lemon pepper and toss together.

Separate the egg whites from the yolks by carefully cracking each egg in equal halves and transferring the yolk from one shell to the other over a small bowl, allowing the egg white to fall into the bowl. Reserve the egg yolks in a different bowl for later use. Lightly whisk the egg whites together, making sure you don’t overbeat so you don’t end up with meringue.

Spray a small skillet with cooking spray, scramble the egg whites together until they start to solidify and add the veggies. Cook until the egg whites are no longer wet and serve with toast. Enjoy!