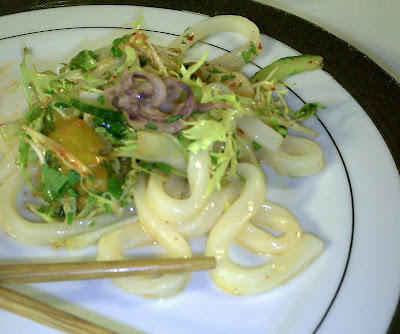 My Mom and plenty of others assured me that my Dad would probably prefer it if I went to the big dinner rather than stay in a hotel and constantly call the hospital about his stauts, so I dolled up and headed to the Hotel Vitale to wait for our buses to pick us up. While I waited, I met up with Diana again and ended up meeting Jared of Entertaining Food, another very charming, interesting blogger. Eventually we all ended up on the same bus that would take us to our dinner - the very bus that was driven by the very driver who very swiftly got us LOST. !!!!!!!!!!!!!! I felt badly for him once he mentioned this was his first time as a bus driver, but I would have preferred it if the charter bus company had given us a slightly more seasoned driver who had been told it’s against the law to hold a cell phone argument whilst driving a bus in San Francisco. Regardless, we finally made it to the Greenleaf Produce Warehouse, cheering and applauding as we awkwardly found our parking spot.

If I’d been able to take more pictures or at least some video, I could have properly conveyed the first impression that this type of dinner makes. Presented by Outstanding in the Field and Chef Dennis Lee & crew of Namu, these folks transformed a cold produce warehouse into an elegant dining space filled with plenty of candlelight and conversation-worthy china. A long – and I mean 250+ people long – table casually snaked through the warehouse, dressed with lovely place settings that featured a variety of plates as unique as each individual blogger in attendance. After scoping out the place for a good seat and getting a glass of wine, Diana, Jen, Linda, Cindy and I settled in and awaited our feast. On the menu for the evening: 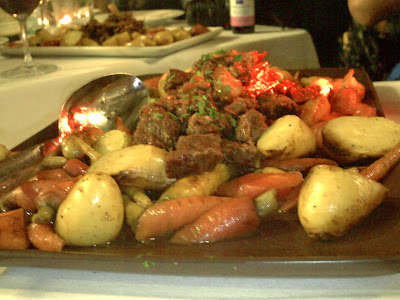 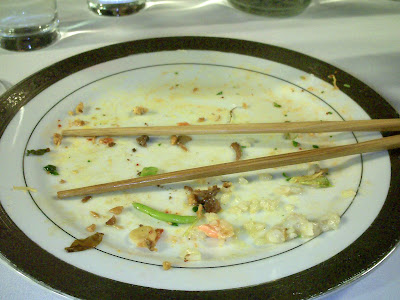 Words simply cannot describe the delectable meal we were served by friendly servers who knew how to anticipate your needs and tell you fun stories, so I thought I'd post these few pictures instead. Although everything was truly spectacular, my 3 favorite dishes hands-down were the Brussels sprouts, the sea trout (which most people thought was salmon, amusingly enough) and the Beef Cheeks & Oxtails (which brought on a hearty “BEEF CHEEKS” cheer from one of the diners at the next table). In fact, I think it’s safe to say that I enjoyed the Brussels sprouts the most! Diana told me she also roasts her own and I will have to follow suit and post a good recipe on PGEW soon, because I am now obsessed with Brussels sprouts (they can be YUMMY, I SWEAR!!!). 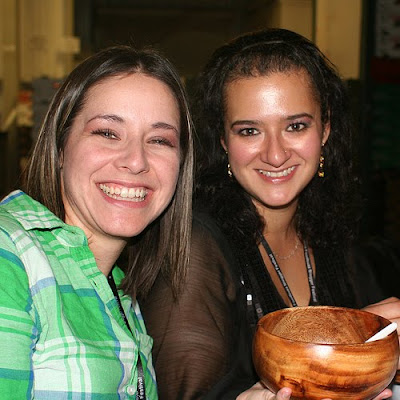 The awards ceremony was held during the dessert portion of the evening, and we were all called to the stage area to hear the results. As with all good awards ceremonies, they saved the most important categories for last, so my category, Food Blogger You’d Most Like to See Have Their Own Show on the Food Network, came quite early. Diana of A Little Bit of Spain in Iowa was also nominated in this category, but between us sharing such a great camaraderie and her insanely fast Twittering skills (I have NEVER seen anyone tweet on an iPhone quite like that), we both remained unfazed by the fact that someone else won. To those of you who shouted “Unfair!” via email at the fact that I didn’t win, don’t fret! There is always PGEW TV (which I need to update soon) and next year’s awards. For a complete listing of the winners, check out the following page, and for amazing photo coverage of all of Day 2's events, check out Dianasaur's recap of the festivities.

The ride back to Hotel Vitale was far less eventful but much more direct, for which I was incredibly grateful. I made my way back to my hotel where my Mom decided we should have even more food and we ordered some pretty decent 1 a.m. pizza from Mr. Pizzaman (delivery until 4 a.m. on the WEST COAST? They definitely have my vote). As I considered heading to bed with my impossibly full tummy, I vowed I would never eat again. At least, not until the Farewell Brunch the following day. ;) Stay tuned!