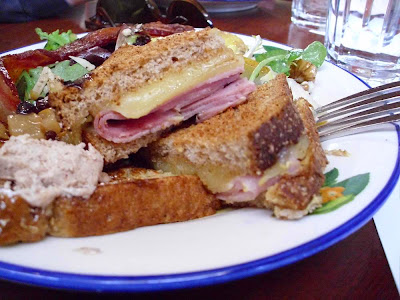 After packing as much swag as I could actually carry home (someday I’ll get a good picture of everything we got so you can see just how much Foodbuzz spoiled us), I hopped – literally, haha – into a cab and headed to LuLu Restaurant for the final event of the weekend, our Farewell Brunch. A few folks were already in line but the organizers were kind enough to let me go in early so I could get settled. As I waited for the rest of the folks to come in, I took a few shots of the restaurant and tried not to drool over the menu that would be served to us in short order. I liked the bright airiness of the restaurant and the simple, contemporary décor, and was very impressed at how friendly the wait staff and bartenders were. Nothing like good service to start off a good dining experience.

I was finally joined by Catherine of Munchie-Musings, Kate of Something We Dreamed, John of Food Wishes (who won Best Video Blog - congrats!), and Joel of Six By 10 Tiny Kitchen and we shared our impressions of the previous night’s dinner while we waited for the brunch to begin. Soon enough we were told we could proceed to the Build Your Own Bloody Mary bar, which I was definitely looking forward to. They split us up into two lines for that, one for those of us who wanted to pick up our Skyy Vodka before mixing our drinks and the other for those who preferred a Virgin Mary. Fresh orange juice and coffee were also offered, in case folks weren’t too interested in the savory brunch drinks. The spread for the Build Your Own Bloody Mary bar was lovely, with ice cold pitchers of the most delicious Bloody Mary mix I’ve ever had (the whole spices and use of real ingredients truly made a difference), giant stalks of celery and every possible garnish you could wish for. My only wish would have been to have a Mimosa bar right next to the Bloody Mary’s, since some of the dishes would have paired nicely with a good Mimosa. 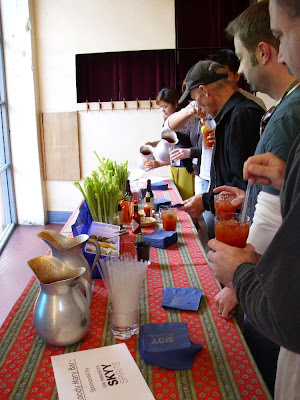 Our brunch buffet was sponsored by the folks from Nature’s Pride, so many of the dishes featured their amazing whole grain breads. On the brunch menu:
~ Frittata with Aged Cheddar, Whiskey & Mushrooms
~ Nature’s Pride Nutty Oak French Toast with Pear Compote & Whipped Cinnamon Butter
~ Croque Monsieur with Swiss Ham, Swiss & Truffle Mustard on Nature’s Pride 100% Whole Wheat Bread
~ Panzanella with Nature’s Pride 12-Grain & Nature’s Pride Country White Breads, Cucumbers, Baby Lettuce, Cherry Tomatoes, Olives & Ivernia Cheese
~ Pear & Bleu Cheese Salad
~ Bacon or Turkey Sausage/Yogurt
Ever the anthropologist, it was fun for me to watch all of us pile our dishes sky high with the great food choices, a sharp contrast to the dainty portions we were serving ourselves the night before. I made sure to try a bit of everything except for the sausage (my thick slab of bacon was more than enough), and I think everything was my favorite! The panzanella was excellent and I would have been perfectly content to eat a pound of that and the Pear & Bleu Cheese Salad if I hadn’t been so curious about everything else. As I just mentioned, the slices of bacon were cut so thick it would have been impossible for me to eat more than one, but I admired those that could. I was quite glad that it was very lean, meaty bacon, a welcome change from the usual greasy bacon they serve at most places. 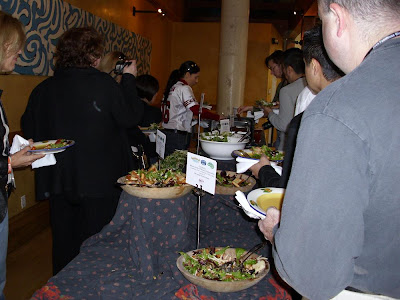 The French Toast was cooked to perfection and accented beautifully by the Pear Compote and Cinnamon Butter. I was a little disappointed that the cinnamon butter was not as cinnamon-y as I’d hoped, but it was still nice to have that as an option in addition to the standard maple syrup. Though I enjoyed everything on the menu, the true star of the show for me was the Croque Monsieur. The entire combination was perfect for me, especially since I’ve become the hugest fan of Nature’s Pride Whole Wheat Bread (seriously – this is the best whole wheat bread I have ever tried). What really made it special was the use of the truffle mustard; it brought a certain earthiness to the tiny sandwich that rounded out the flavors of the ham, Swiss, and nutty whole wheat bread. I was SO glad I grabbed more than one piece before the rest was gone!

After saying my goodbyes (wish I could have seen my gals from dinner the night before!) and struggling to get a cab back to my hotel (SF cabbies are MEAN on Sundays! And there was some protest parade that blocked most of the routes that we needed to take to get back to the hotel! Snarf.), I headed back to Sacramento with a ton of great swag and memories of an incredible weekend. I’m sure it would have been even better to have participated in every event, but the ones I was able to experience were just fabulous. Foodbuzz really deserves all the thanks in the world for organizing a truly memorable event that I believe will only get better as the years go by. Between the seminars, the food, and the ability to meet and socialize with awesome folks who are just as crazy about food (and taking photos of it) as I am, the Foodbuzz Blogger Festival is a food bloggers dream! I mean, where else can you find 249 other food obsessed people with cameras ready to take pictures of anything they see? :)
Thank you, Foodbuzz!!! See you next year!