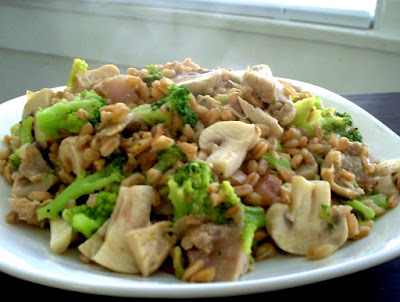 I remember being absolutely petrified of freeways when I first started driving. The speed didn’t bother me as much as the people that won’t let you merge into a lane. I actually avoided freeways at all costs for the first year I drove. One day, however, I just decided to do it and I have adored the slightly increased speed and lack of stoplights on freeways ever since. I am in a similar situation right now with my current love affair with making risotto out of everything. A couple months ago I’d mentioned I used to be a little frightened of making risotto until I finally tried making it; now I can’t stop. I’ve played around with the traditional version that uses Arborio rice, and truly enjoy making quinoa variations every now & then. This time around I thought I’d try something different and make a farro risotto, also known as farrotto.

This experiment worried me a little because I was unsure of what the results would be like. Those of you who have embarked on the farro adventure with me know that it’s a heartier, nuttier, tougher grain than quinoa or regular rice, so I was sure this would translate into the final product. It does in a slight way; there is only so much that farro will yield when it comes to becoming softer. I found that farrotto still comes out creamy and comforting with a slightly chewier texture than traditional risotto.

What I like about making risottos is that they can often turn into one-dish meals. By keeping enough bare bones staples on hand like rice or farro, you can easily use leftover veggies & meat to make a great entrée that won’t break the bank. Out of just a cup of dried grains, leftovers and some chicken broth, I was able to make enough to serve about 4 people (or for someone on her own like me, 2 lunches & 2 dinners). With this version I wanted veggies and chicken, and thought the combination of textures would be interesting & tasty if I used broccoli and mushrooms. I used a little more wine in this than in my quinoa risotto to kick up the flavor a notch or two, but again, if you don’t have wine at home, don’t run out and buy a bottle just for this! Simply use extra broth (or even milk for extra creamy results) and you’ll be just fine.

Rinse the farro in a mesh strainer with cold water about 2 or 3 times and let drain completely. Heat the canola oil (or butter) in a large skillet over medium heat. Add the garlic and chopped onions and cook until the onion begins to turn translucent. Increase the heat to medium high and add the rinsed farro, sautéing for about 2 minutes. Add the wine and cook until it has been absorbed by the farro. Next, add ½ cup of chicken broth, cooking until the farro absorbs it entirely. Repeat this process ½ cup at a time, allowing the farro to absorb the broth completely before adding the next batch of broth.

After adding the final ½ cup of chicken broth, add the salt & herbs and mix well. Reduce heat to medium and add the chicken, mushrooms and broccoli. Cook for another 3-4 minutes until the broccoli becomes tender and the last bit of broth has been completely absorbed. Serve by itself or with a nice salad and enjoy!