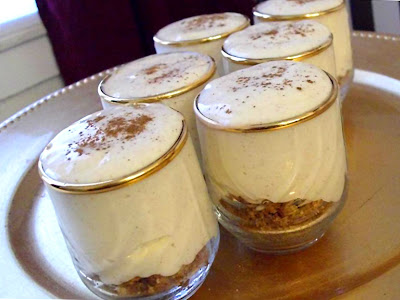 There’s no denying it now: the weather is crisp and cold, decorations are up, there’s talk of shopping all over turkey & canned food drives are everywhere the place – yep, the holidays are definitely here. As my holiday “splurge” the last time I was at my local Safeway, I picked up a quart of eggnog and was perfectly content enjoying a tiny glass here & there when I realized that I just can’t drink that much eggnog all at once. Don’t get me wrong, I like it a lot. But even in its lightest form, I feel like it’s entirely too rich for me to drink too much of it. That doesn’t mean I can’t eat it, though.

I had a different dessert shot planned but decided to put that one on the back burner for a bit so I could share this one with you fine folks (and so that I wouldn’t waste my eggnog) in time for the holidays. This is a very easy dessert to make and is one of those easily doubled, make-ahead recipes that can help you save time when you’re entertaining. It costs a bit more than most of my dessert shots but is well worth it, especially if you’re looking for something different to serve for all those parties that will be starting soon. It’s super rich too, so one shot could easily be enough for one person. I used both light cream cheese and light eggnog in my recipe, and these were still deliciously rich.

Just a quick note about the recipe: I have written it to include gelatin so that these keep their shape. However, if you’re a vegan or strict vegetarian, you may use a couple of tablespoons of lemon juice instead; it will help the mixture become more firm, like a no-bake cheesecake. Doing so will result in a slightly more creamy dessert, with a consistency much like that of zabaglione, but it’s still very delicious and goes quite well with the crust. Give ‘em a try either way!

Prepare the crust by combining the crushed graham crackers, melted butter, nutmeg & cinnamon in a bowl and mixing together until completely moistened. Spoon 2 teaspoons of crust into each shot glass and pack the crust down gently. Set aside.

Dissolve the gelatin into the hot water and stir until completely dissolved. Set aside. Whip the cream cheese with an electric mixer until smooth & fluffy. Add the eggnog and condensed milk and mix for about 2 minutes at medium speed, adding the spices about midway. Add the gelatin and beat until firm. Spoon the cheesecake mixture into the prepared shot glasses and chill for at least an hour before serving. Dust with extra nutmeg for garnish and enjoy!