What's In Store for December 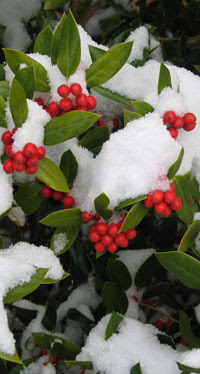 2009 has flown by so fast it's almost unbelievable! I swear I just posted the two New Year's Day quinoa recipes a couple of months ago. What's just dawned on me recently (even though it's all over the news) is that it's also the end of this decade, and that's even more unfathomable to me. It's been a very odd, difficult decade for most of the world, so here's to having a much better decade come January 1st.

Except for spraining my ankle and getting pretty sick again in November, I have to say it was a total blast in PGEW land! The Foodbuzz Blogger Festival was incredible, there was more press coverage for my little blog, and I was selected to be a part of my first Foodbuzz 24, 24, 24 feature, in which 24 bloggers post about 24 different meals in 24 different hours. If you haven't already checked out the coverage of my After Thanksgiving Colombian Tapas Party, you should do so right now! It's a lengthy post but is full of great photos and has 4 new recipes that you might want to try at some point.
So what's there to look forward to this month?
~ A couple more recipes inspired by the After Thanksgiving Colombian Tapas Party! Buñuelos are easy to eat but a bit more challenging to make correctly, so I wanted it to have its own little post. This is a very traditional Colombian snack that is usually eaten during the holidays with other fun treats, so for those of you who are adventurous and have never tried them, give these a shot.
~ I'm attempting another video for PGEW TV, this time with me in the kitchen. Should be interesting! (I apologize in advance for my eyesore of a water heater; whoever designed my apartment was apparently on crack for putting that in the kitchen!)
~ Though we had a relatively tiny turkey for this year's Thanksgiving (we're used to getting a gigantic bird every year, so a 17lb turkey was almost insulting, lol), I'm still drowning in leftovers. The Tapas Party helped me get rid of some of them, but there's a lot more I can do with the stuff I've got in the fridge, so stay tuned for some very interesting leftover recipes!
~ Christmas, Hanukkah, and all the other wonderful holidays of the season are swiftly approaching, so I know you'll all need gifts! Check out the new PGEW Store in the left sidebar (with only 1 item, but don't worry... I have other stuff up my sleeve) and purchase a few copies of the Poor Girl Eats Well - To Go! mini book to use as stocking stuffers or Secret Santa gifts! They're just $10 and feature 13 recipes and 4 tips that will help anyone get started on eating well on a teeny tiny budget.
~ More dessert's a-comin' this month! Sweet treats are a big part of December cooking all over the world, so be on the lookout for some ideas that will taste naughty but be totally nice to your wallet.
Happy December, everyone!
Lv,
PG