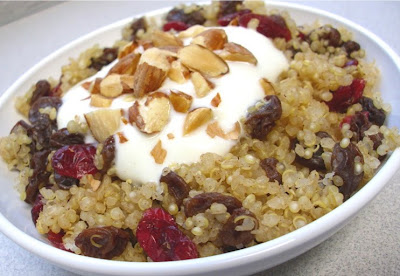 This week I’ve been having some pretty light breakfasts that have been just fine in terms of giving me some energy & sustenance for the beginning of the day: a fruity protein shake, some scrambled egg whites with spinach & veggies, etc, etc. Today, however, I wanted something a bit heartier - just a giant bowl of something warm & filling. I contemplated having oatmeal but realized I was out of the instant kind and didn’t really have the time to go into the whole oatmeal-from-scratch making process, so I opted to have a hearty bowl of quinoa instead. Because I was also out of apples (and because it’s just a bit too sinful of a breakfast to be having just yet; I have to exercise some restraint here!), I couldn’t really indulge in my Warm Breakfast Quinoa with Cinnamon Apples, nor could I have my Mixed Berry & Almond Quinoa Bowl because I was also out of berries. But darnit – I WANTED QUINOA FOR BREAKFAST! What to do, what to do?

Well, this was one craving I wasn’t going to ignore, especially after resisting the siren call of Pancho’s Cocina Mexicana yesterday (it’s so wrong to watch your coworkers go without you and then come back smelling like enchiladas. *sigh* Still, I saved some much needed dinero by not going!). I had raisins, I had Craisins, heck, I even had some yogurt and nuts to throw into the mix – breakfast would be served in no time. This bowl of goodness couldn’t have turned out better, and I lightened things up a bit this time by not using any of the evil cinnamon-sugar-butter concoctions that I’m apt to put in everything. It’s packed with protein, of course, and the addition of some creamy yogurt tied everything together beautifully.

I know, I know; on a weekday it’s probably easier to head to McDonald’s and get a McGriddle or something, but is that really the way you want to start the new year? (The correct answer is NO.) This is inexpensive and good for you, and not all that time consuming if you organize your morning just right. Hooray for healthy workweek breakfasts that don’t cost an arm & a leg!

Rinse the quinoa thoroughly before cooking. In a medium saucepan combine the apple juice and milk and bring to a low boil. Add the quinoa and cook for about 20 minutes or until the quinoa grains have burst and are tender (but not mushy!). Add the cranberries and raisins and cover for about 2-3 minutes to let the steam plump them up a bit.

Spoon a generous amount into a bowl, top with ½ cup of yogurt and plenty of chopped almonds, walnuts or pecans, and enjoy!