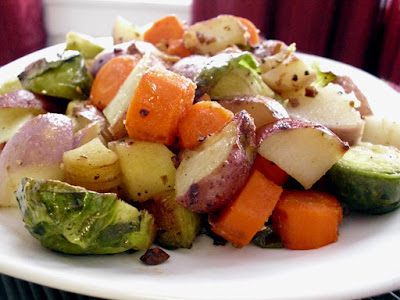 So did everyone have a good time ringin' in 2010? I had an absolute blast with a few friends and even found a new restaurant/bar to review, only I will wait until I can afford to go again on a night that isn't in full party mode. Yesterday I took it easy (wasn't hungover, just turned around with my sleep schedule, since I'm used to early nights due to work) and watched a few movies while I contemplated removing the Christmas decor around here. I decided to put that off for a wee bit longer and set about making some sort of veggie-filled dish for lunch so I could get back on track after all the New Year's Eve indulging. It occurred to me that except for the giant bag of Brussels sprouts hanging out in my crisper, I was sorely lacking in any fresh vegetables. I contemplated making a salad with the sprouts but felt I should leave that recipe for later, after I've perfected the dressing. Finally, after much poking around, I realized I could make use of all the root veggies I had been neglecting. I love roasted Brussels sprouts and I love roasted root vegetables, so it seemed like an ideal situation.


A lot of you saw my lamentation on Facebook regarding the lack of decent and affordable fresh tomatoes these days, and I'm suffering from withdrawals of many fresh items because of the weather and mobility issues (the latter of which has seen vast improvement as of late! I'm even wearing matching shoes!). Because of this I have become far more fond of root veggies like potatoes, carrots and turnips, not to mention the occasional parsnip. Most are in season right now and they do keep longer than some of our favorite summer veggies & fruits, making it easier to cut back on their cost. Except for having them roasted or puréed as a side, I hadn't really done much with them. I haven't done much with this either, aside from roasting everything together in a garlicy honey glaze and adding pan-fried garlic at the very end. It's simple but really enhances all of the flavors, especially the garlic and how it lends a smoky aroma to the natural nuttiness of the Brussels sprouts. This sounds fancier than it actually costs and is a delicious way to get in a ton of veggies with minimal effort, especially for those of you who may have most of these ingredients in your home gardens. No moaning and groaning now! It's a new year and it's time to eat more vegetables, so let's do it! :)


Preheat the oven to 425°. Whisk together the honey, olive oil, granulated garlic, salt & pepper and set aside. Rinse & peel the carrots & parsnips (I like to leave the skin on the potatoes & turnips but you may also peel those if you like) and chop all the root vegetables into 1" pieces. Rinse the Brussels sprouts thoroughly, pat dry and cut in half. Combine the roots and sprouts in a large bowl with the honey glaze and toss together until everything is evenly coated. Place in a baking dish lightly sprayed with cooking spray and roast for 20-25 minutes, until the root veggies are tender and the sprouts begin to caramelize.


While the vegetables are roasting, place the cooking oil in a small frypan or skillet and heat over medium high heat. Add the finely chopped garlic and allow to fry until it turns a deep golden brown but doesn't burn. Drain on a plate with paper towels until crispy and remove about 1 tablespoon for garnish. Remove the vegetables from the oven and allow to cool for a couple minutes before adding the rest of the pan-fried garlic and tossing together until combined. Serve as a side or as a nice meatless entrée, garnish with extra garlic and enjoy!