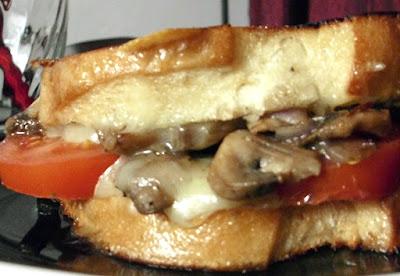 So last night I went to my very first TweetUp, hosted by Alejandro Reyes of Get Internet Famous and the rest of his amazing resume. Held at one of my favorite Sacramento restaurants, Mikuni (Midtown, of course!), this fun event was part-social, part-networking, part-Mardi Gras Madness and it was a very good time. From $5 drink specials (and if you’ve been to Mikuni you know that’s a good price for drinks!) to our spread of free bites like sushi rolls, gyoza and endless edamame, it was definitely a Poor Girl friendly event. I went with my new pal, Catherine, of Munchie Musings, and had the chance to finally put real names & faces to other great locals like Brittany of SacFoodies.com. Unfortunately, in my mad dash to get semi-dolled up in the 10 spare minutes I had after work, I forgot to charge my camera battery, so yeah…. I think I might’ve gotten ONE shot of a lot of folks’ heads before the darned thing died. *sigh* Eh, what can you do, right? I’ll definitely be at the next one(s), so if there’s anything yummy to take a snapshot of, I’ll share it with you.


Anywho, it wasn’t until Ms. Munchie dropped me off at home that I realized I’d barely nibbled on a couple gyoza and several (flying) edamame, such was the fun we were having socializing with everyone. It was still early enough to have something for dinner but late enough so that I didn’t want to get too involved with any of the new recipe ideas that are swimming in my head, so I poked around the fridge to see what I could make in a jiffy. My first thought was an old standby of mine: grilled cheese & tomato, a perfectly wonderful meal in and of itself. Then I spotted the mushrooms and thought it’d be fun to throw those into the mix. When all was said and done I had a sandwich I would eat daily if I knew I wouldn’t end up weighing a metric ton as a result. Sauteed mushrooms & onions with melty, gooey cheese and fresh tomato on grilled sourdough – what’s not to like? Even if it’s got plenty of cheese, it’s still a heck of a lot better for you than a lot of those new “grilled cheese” or “panini” style sandwiches that certain major fast food chains are marketing so heavily right now, as you don’t have the added calories & fat of a ton of ground beef in there. And mine’s still less expensive than those sandwiches or anything similar you might find at a regular restaurant!

I do *heart* when things come together so beautifully. :)

Butter one side of each slice of bread with about ½ tablespoon of butter and set aside. Rinse the mushrooms well and slice into thick pieces. In a small skillet, melt the remaining ½ tablespoon of butter and add the sliced onions. Sauté over medium heat until they begin to soften, then add the sliced mushrooms. Season with salt & pepper and sauté for about 2-3 minutes. Remove from heat and set aside.


Heat a medium skillet over medium heat and place both slices of sourdough into it, butter side down. Grill for about 1 minute, then add 1/2 the cheese to each slice. Cover and allow the steam to melt the cheese for around 1-2 minutes. Uncover and add the mushroom & onions to each slice of bread. Add the tomato slices then put both halves together and continue grilling until both sides of the sandwich are a nice golden brown. Grab a napkin and enjoy!