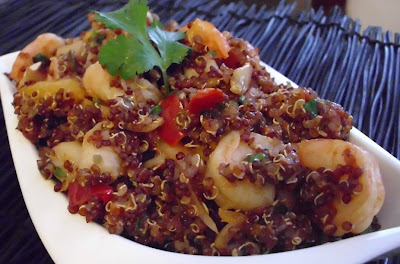 So a lot of you have been asking about my new work gig (I hate to call it a job just yet, as it’s another temporary position), and I apologize for keeping it a bit on the down-low. I know it’s silly but with the hell that has plagued Kimberland recently, I’m a bit hesitant to proclaim myself as employed, especially since I know this job could be over in a few months. However, you guys have all been so awesome & supportive over these past horrible weeks that I thought I’d share with you that Poor Girl has kinda sorta scored some full time-ish employment for the next few months. It’s a contract position and it’s for an agency I’ve been dying to get into for the past 3 years, so I’m pretty stoked that I’ve got at least one toe in the door. I’m back in a field that I have loved and missed since ’06, and even though I’m pretty busy and there’s a heck of a lot to learn, I’m in a far more Kimberfriendly environment. I'm pretty content right now.

That being said, let's get to tonight's recipe (which is going to be far healthier than the last two, I promise)!

I was revisiting an absolute favorite of mine for lunch yesterday, my Red Quinoa & Broccoli Salad with Almond Honey Vinaigrette (not to toot my own horn, but this is one of the greatest salads EVER, imo), and it dawned on me that I hadn't cooked with red quinoa in ages. Or quinoa in general. After that brutal month of unemployment, I've been trying to get back into the swing of more nutritious fare that I can take with me to work (especially now that I'm at a job that'll let me eat at my desk; SO nice to work on regulating my blood sugar again by eating smaller, frequent meals! But I digress), so I returned to the Mother Grain. For some reason I wanted to make something spicy and fiery with this deep red grain and since I love it when spicy + shrimp = a practically perfect food, I thought it might be fun to combine the two.

Now, I will warn you, this is NOT for the faint of heart! The sauce itself is extremely spicy but intentionally so, in order for the quinoa to absorb the flavors & heat. This dish is packed with protein because of the shrimp and, of course, the quinoa. It's intensely flavorful, and filled with interesting textures. But what I love most about this is how it much food you end up with only using a cup and half of dried quinoa! This will serve at least 6 people as written, and because I ended up with far more than a single person could ever eat, I fully intend on freezing some of this for future meals. Though it may sound like a lot of work, it's really quite easy to make, which makes the whole thing even better.

For you folks who live in more remote areas were quinoa is not easily found, never fear! You can make this with some good brown rice for now; once I find you some quality, affordable online resources for y'all, I'll be posting that info for sure. For the rest of you who can access the mother grain right now, here's the recipe!

1 14 oz. can diced tomatoes with their juice

1 c red & yellow pepper strips (if you only have one or the other, that's fine too)

Thoroughly rinse the quinoa in a fine mesh colander and drain well. In a medium saucepan combine the water & quinoa with just the tiniest pinch of salt and bring to a low boil. Reduce heat to medium and cook until the quinoa is tender and the grains have sprouted. Drain any excess liquid and set aside.

Heat the olive oil in a large skillet over medium heat and add the garlic & diced onion. Cook until the onion just begins to soften. Add the pepper strips, salt, cayenne pepper and crushed red chilies and cook for about 1 minute, then add the diced tomatoes & their juices. Simmer for about 4 minutes to allow all the flavors to incorporate. Add the shrimp and cook until they're heated through (about 2 minutes). Finally, add the quinoa, folding the shrimp sauce into it gently until everything is completely combined. Reduce heat to medium low, cover, and cook for another 2-3 minutes. Uncover, add the chopped cilantro and mix well.

Serve as a side or as an entrée with a nice salad, garnish with extra cilantro leaves, and enjoy!