When was the last time you went to a Red Lobster? I can honestly say it had been several years for me; so many, in fact, that I calculated I was still in my mid-20’s on my last visit (that’s a good 8 years ago… eek!). So when Catherine of Munchie Musings asked if I wanted to join her for some promotional event at Red Lobster this week, I figured I’d tag along, if only to have one of those cheddar biscuits. I don’t know about other Red Lobster patrons, but those warm, crumbly bundles of cheesy, garlicky goodness have always been my favorite part of the RL experience. Until yesterday. 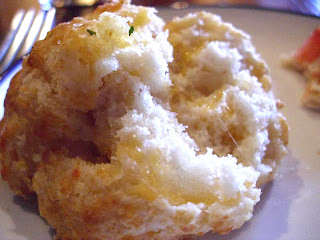 I didn’t know too much about the event until we actually got to the restaurant. Ms. Munchie told me we’d be meeting with some Red Lobster reps and the head chef, but other than that, I wasn’t too sure of what we’d be experiencing. Turns out we ended up having a lovely little tour of the newly remodeled restaurant and a menu tasting of some of the items on the updated Red Lobster menu. Which, I am happy to note, includes many tasty new options that do NOT feature 2-3 inches of greasy deep fried batter or gallons of melted butter with my fish or shrimp. Not that this is what has kept me away from Red Lobster all these years, but it is something that makes me shy away from ordering seafood when I go out. I think it’s a shame to hide such things in butter & batter. Anyway, the event was a way for Red Lobster to reach out to the public and show that they’ve stepped up their game with new items and fresh flavor combinations that you wouldn’t necessarily think Red Lobster would offer.

After being introduced to Red Lobster PR reps, Erica and Kate, Chef Michael LaDuke, head chef of Red Lobster (the entire chain, not just the one on Howe Avenue. You might know him: he’s been a judge on tiny little shows like Iron Chef and The Next Food Network Star, not to mention the rest of his awesome resume which includes being head chef of Disney’s Epcot center. Yeah… Chef Michael knows his stuff.), as well as Julia of Jogging My Memory, we sat down and enjoyed some drinks while we got to know each other through some fun foodie questions like, “What’s your favorite guilty pleasure?” (You’ll all be proud to know I actually did NOT choose cheese as my first choice, lol.) 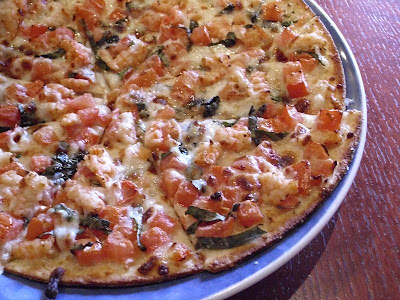 Shortly thereafter we received our first appetizer, the Lobster Pizza. Now, this wasn’t such a far-fetched idea to me because my mom & I have been huge fans of putting shrimp on our pizzas in the past, so going the extra mile and adding langostino to a nice thin-crust pizza wasn’t as strange to me as it was to some of the others at the table. This is one of those appetizers that would double perfectly as a light lunch or dinner, as it’s the size of a personal pizza and leaves you completely satisfied with its delicate blend of flavors. The crust was lightly seasoned and wonderfully crispy, and the sweetness of the langostino was complemented beautifully by the addition of fresh tomatoes & basil. I could definitely see myself enjoying this with a glass of wine for dinner next time I go into RL. 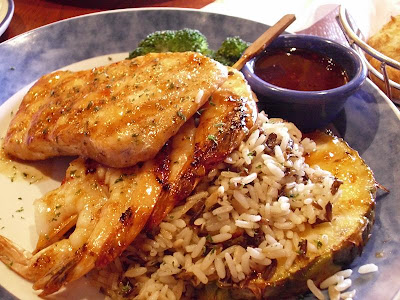 Next, we were treated to the Maui Luau Shrimp & Salmon. Served atop a wild rice pilaf with a side of steamed broccoli, this was a great little combo of wood fire grilled salmon and large prawns accompanied with a sweet chili glaze. Catherine & I were both pretty stoked that the dish automatically came with extra glaze, something one usually has to wrestle for (and usually end up having to pay extra for) when dining out. The salmon was just a tad overcooked but still tender & flaky, and the prawns were grilled to perfection. The sweet chili glaze was just a little hotter than I’m normally used to, a welcome change for a place like Red Lobster which has generally featured sauces that are a bit more on the tame side. And I know sides of broccoli aren’t all that exciting, but I was very pleased to note that this broccoli was truly steamed, not steamed then drenched in butter like some other chain restaurants will do (*cough cough Applebee’s*). 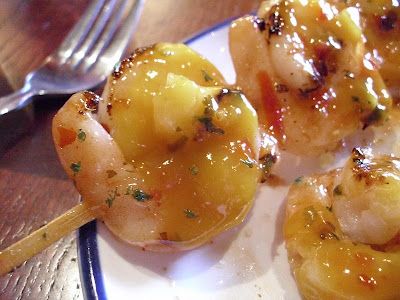 This was followed by a beautifully presented pair of Mango Jalapeño Shrimp Skewers which were nestled atop some crispy fried onions. The sauce could have used a bit more kick to it (I was expecting the jalapeño bit to get to me but it didn’t), but it was still quite tasty. Chef Michael told us that the heat factor was something they were still working on, so I’ll have to go back to see how spicy they end up making it! He also explained that they used some of the sweet chili sauce that was featured with the previous dish as a base, and I could see myself recreating something like this in my own kitchen someday. What I really liked about this presentation, though, was the way they interlocked 2 shrimp at a time on the skewer in a sort of Yin-Yang type embrace. Not only did this look good, it made Poor Girl very happy to know that if I were to ever order this, I would actually get what I was paying for. I mean, seriously: how often do you ask for skewered anything and get more than 3-4 pieces of the good stuff? This featured a good 8-10 medium shrimp, generously coated with the sweet glaze. Muy delicioso, indeed! 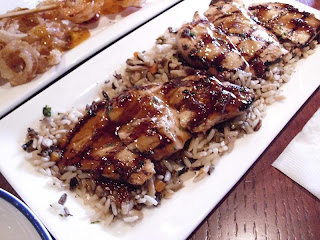 Maple Glazed Chicken was next. A little something different from the seafood, this was also wood fire grilled (which Chef Michael explained to us is not only a change they’re making for flavor but for overall nutrition as well, since it’s a healthier way to cook) and glazed with a sweet maple sauce with dried cherries. Chef Michael told us that he's a huge fan of maple, having grown up in New York, so he likes to throw it into the mix every so often. Now, I couldn’t really taste the cherries too well but the maple flavor went really well with the smoky flavor of the chicken. Personally, I preferred the seafood but I thought this was still a solid little dish. However, it was nowhere near as delicious as our next dish, 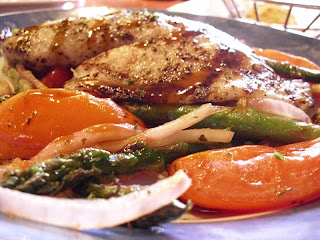 Wood Fire Grilled Tilapia. Featuring a soy glaze with a perfect amount of wasabi for extra kick and served over fresh asparagus and tomatoes, this was by far my favorite of the evening (and I’m a huge fan of sweet & spicy sauces in general, so that’s saying a lot!). The tilapia was cooked to absolute perfection! It was tender and flaky and simply melted in your mouth, and the addition of the soy-wasabi reduction was the perfect complement without being overpowering. If I could have put the leftovers in my pockets I would have taken them home with me, they were that good!

I figured we were probably done with tasting for the evening but we wanted dessert and Erica also suggested we try another appetizer, so we were given some menus to peruse. We decided on the 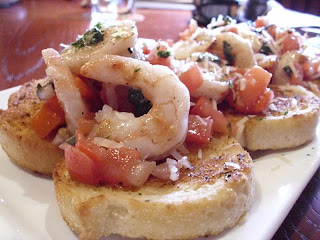 Wood Grilled Shrimp Bruschetta as our appetizer and went back to our fun foodie discussions, covering topics from our greatest kitchen/food accomplishments to our favorite gadgets. We paused a bit to take pictures of the lovely bruschetta before digging in (okay, we paused a bit for every dish because you know how food bloggers can be: Must. Get. Every. Angle. Before. Eating!!!). This was another perfectly prepared appetizer, the tender shrimp, basil, tomatoes, onions and balsamic vinegar perched on the best bruschetta toastettes I’ve had in a long time. Part of the problem with bruschetta is that the toastettes are often over or undercooked, so you either get soggy mush or a broken tooth out of the whole experience. I liked being able to enjoy this without having to bite into it gingerly out of fear, not to mention the fact that the flavor was fantastic! Another must have for sure. 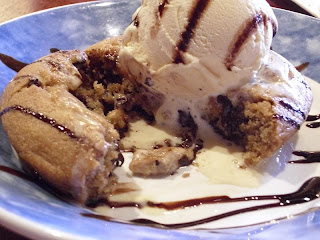 Last, but certainly not least, was the Molten Chocolate Chip Cookie. Everyone’s had a molten chocolate lava cake by now; they’ve become popular enough so that they’re even available in the frozen dessert section of most grocery stores. But a molten chocolate chip cookie? A 3-4” thick chewy chocolate chip cookie that oozes even MORE chocolate and is then topped with ice cream? Unprecedented! It was truly delicious and if I hadn’t been so darned full at that point I would have had a couple more bites.

After enjoying the incredibly fun conversation and wonderful food, we went on a quick tour of the newly remodeled restaurant. We were told that the Sacramento Red Lobster locations were all recently renovated and I must say it’s a vast improvement from the décor the Howe Avenue location used to have. There was a definite nautical theme to the whole place (which reminded me of the Mountain View location my parents & I would go to on occasion), but it wasn’t hokey or overdone. The highlight was definitely the lovely new patio which is absolutely perfect for those balmy Sacramento summer evenings that will be coming soon. We took some photos with Chef Michael, met the general manager of the location we were visiting, who I completely forgot to thank for the excellent service we had. Though it wasn’t the traditional dining experience, our servers were friendly, attentive and quick to bring out each course without being intrusive, something that’s always appreciated. 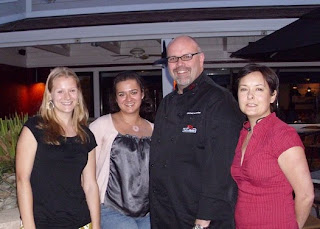 Overall, it was a really fun experience and a nice way to reintroduce Red Lobster into my vocabulary. Not that I was as anti-RL as Catherine & Julia had been before this event (my tastes run from the most humble little tamale vendor outside of Big Lots to Top of the Mark in San Francisco, so I don’t discriminate too much!), but I really had written the place off because it had just gotten too boring. Chef Michael LaDuke’s talent is definitely an asset and a secret weapon, as I’m sure this will force other chain restaurants to start stepping up their game as well. And though it’s not something I can afford to do regularly, the next time I’m in the area with some disposable income I think I will make it a point to stop by Red Lobster and enjoy some of the dishes we tried, particularly the appetizers. Because the portions are so generous, you really can go the budget route and have a perfectly satisfying meal made of appetizers without going completely broke.

Or just go in for the Molten Chocolate Chip Cookie. That’s a balanced meal, isn’t it? ;)