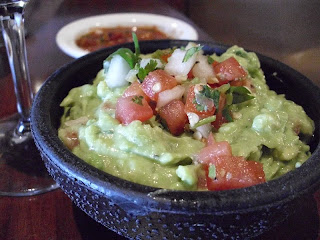 Nestled quietly on the Tiburon peninsula just a few miles north of San Francisco is the adorable little town of Tiburon (also known as Belvedere-Tiburon to some). Filled with plenty of small town charm and spectacular views of the city, Angel Island and the bay, Tiburon is great for stay-cation if you happen to live in Northern California. It is also the home of Guaymas Restaurant, a gem of Mexican restaurant for those who truly appreciate both seafood and authentic Mexican food. Situated just south of Tiburon's picturesque and quaint downtown area along the edge of the peninsula, Guaymas offers spectacular views of the San Francisco Bay and all its bustling ferry & sailboat activity from both the inside and the large deck reserved for outdoor diners. Inside, the restaurant is spacious and boasts the traditional tiled floors and brightly colored walls that are typical of most Mexican eateries. What's not typical is the large and beautifully-stocked bar and the impeccably clean and efficient open kitchen; that kitchen was spotless! Granted, we were there early in the day, but the restaurant had plenty of filled tables, so it was quite a treat to watch a well-trained crew with a strong chef keep their work area so pristine despite the busy workload. 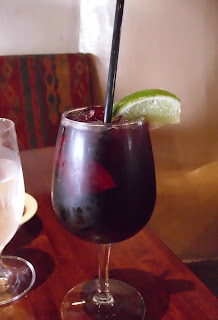 Since we were there for my mom's birthday (her "from herself to herself" birthday treat was going to Guaymas), I let her do most of the ordering. She decided we should start off with their sangria, which was a bit strange for her, considering she doesn't usually drink red wine. Still, I wasn't about to complain as I adore sangria and I was happy to find the Guaymas sangria to be most satisfying. It was a sweet deep purple, packed with fruit and potent enough to elicit a tiny "woo hoo" from both Mama and me. With our sangria came our chips & salsa, a fabulous treat when done properly as theirs was. Nothing worse than diving into that basket of tortilla chips only to find that the chips are cold, stale & rancid! These were the exact opposite: fresh, warm and deliciously crispy, cut large enough to hold generous portions of the slightly smoky (dare I say chipotle-spiked?) fresh salsa.


It's impossible to go to Guaymas and not have their guacamole, which is quite possibly the most perfect restaurant guacamole I have ever had. It's exactly the way guacamole ought to be: fresh and chunky (not puréed!) with plenty of fresh cilantro and just the perfect amount of chopped tomatoes to add some color & texture. 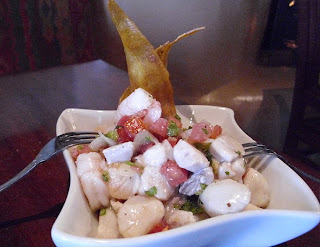 Because Guaymas focuses primarily on seafood based dishes (it's named for the small Mexican fishing village along the Sea of Cortez), and because my mom & I are both huge ceviche fans, we decided to give their Ceviche Trio a shot. A mixture of mahi mahi, shrimp and scallops marinated in delicate citrus juices was accented beautifully by its fried plantain garnish. The seafood was cooked to perfection, and the only things I would have added was a bit more cilantro and a bit more lime juice (it seemed a bit on the sweet side).


We were originally considering their tamale trio platter as our entrée, but I couldn't take my eyes off the Mariscada, a sizzling platter of marinated fish, shrimp, squid, mussels, clams, mushrooms and onions. (!!!!!) Seriously, all they needed to add was tomatoes, chocolate and cheese and I would have had a sizzling platter of everything I love to eat! 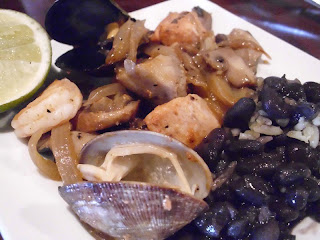 Because of the price and the fact that we were starting to feel our tummies get full, my mom & I chose to split this entrée between the two of us. This was a very wise decision because the platter was generously filled with more than enough fresh seafood for two, and the entree included fresh, homemade flour tortillas and a large bowl of rice and black beans. After taking a couple hundred photos from different angles (and getting scolded for it by my mom... she should really know better by now, right?), we both dug in and fell silent as we savored this dish. Everything was perfectly cooked and seasoned with plenty of citrus and spices, and the addition of the wild mushrooms added an unexpected gameyness and texture (can we say "umami"?). I was too involved in my seafood to notice my rice & beans, but Mama assured me that the beans were delicious and that both were cooked in a rich chicken broth, something we're both going to try in our own kitchens.


After a quick break and vows that we would walk off this giant meal immediately, Mama ordered her favorite - a Kahlua & coffee (or, as I like to call it, a Kimberlatte) - along with the 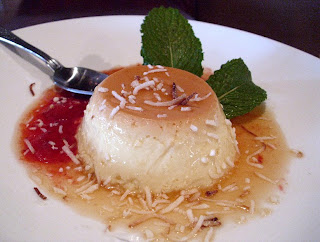 coconut flan for dessert. We were very pleased that they got our drinks right and used a rich, freshly brewed coffee as the base. Our flan was beautifully presented with shredded coconut, fresh mint leaves and strawberry sauce for the garnish, but I personally thought it was a little bland. Perhaps it was because I still had the gustatory memory of the homemade flan from our Staff Appreciation lunch in the forefront of my mind; or perhaps it was because it was a coconut flan and, therefore, supposed to be milder than the traditional creme brulée-esque flan. Either way, it was not bad flan; I just felt it could have used a bit more flavor.


Overall, this visit to Guaymas - only my 2nd or 3rd, actually - was a true delight. From our attentive server to the delicious food, we couldn't have asked for a nicer experience. Though it's not the most Poor Girl friendly in terms of prices, the value of the food is well worth it, particularly when it comes to the seafood dishes. The portions are generous and the quality & freshness of the seafood is just excellent. Sure, there are reviews out there that knock the food and service (admittedly, we have had some rude waitresses serve us there in the past), but it seems to me that what these folks are expecting Taco Bell by the bay. Guaymas doesn't serve the extra spicy, red sauce laden food that's so common in a lot of Mexican restaurants here in the US; it strives to serve the flavorful, lighter fare that is traditionally found on dinner tables in Mexico. Those of you who have visited this country, especially the tiny fishing villages in Baja California, know that true Mexican food is fresh, light, and bursting with unexpected flavors & spices, not smothered in greasy sauces. So if you're looking for the Americanized version of Mexican food, Guaymas may not be the place for you. However, if you're heading up the coast to Stinson or Muir Beach and craving fresh, perfectly cooked seafood, authentic dishes like chiles rellenos and tamales seasoned with real jalapeño, serrano & poblano peppers and plenty of fresh citrus, not to mention the spectacular views of the San Francisco Bay, Guaymas is a great place to relax, unwind and savor life over a really good meal.