This particular edition of the $25 Shopping Cart amuses me because it's not someplace I ever expected to go for this feature. I had mentioned in the last edition that I was heading either to Raley's or the 99-cent store, but a recent trip to get cheap cat stuff ended up with me wandering around and finding more food than I would have ever expected from this store. So where did I end up? My favorite place to get great stuff for less money: Target. (Which, in Kimberland, is pronounced en français: "tar-zhay") 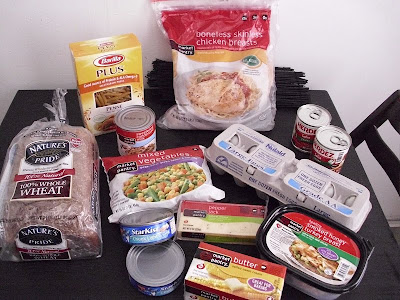 Now, I'm quite aware of the fact that there are Super Targets out there that have a full spread of groceries and produce, and there is one in the greater Sacramento area. Only problem is, it's too far off the light rail or bus routes for me to get to it (and I'm not a big fan of Natomas anyway). So when I go to Target, I visit my friendly neighborhood Targhetto - as the locals have lovingly dubbed it - on Broadway & Riverside. It's close enough for me to get to, but far enough for me to get in a pretty good workout on the walk over. Back when I still had a car I used to go there quite frequently for all sorts of things, but I haven't been by that much due to the evil 78-month winter we've been dealing with (I like to round up). So when I headed in to pick up said cat provisions a few weeks ago, I couldn't help but take a quick tour of the rest of the store to see what new stuff was available. This included the food section, and I have to admit I was pretty surprised with what I found.
I usually skip the food section of Target because it's usually just filled with sugary cereals, candy and junk food. Until now. I knew they had added a refrigerated/frozen section with cold juices, water, and a couple frozen entrées and pizzas, but I had NO idea it had blossomed into the lovely little food section it is now. True, there is no produce and all the sugary junk is still there, but now there are actually real foods! Milk and cheese and butter, oh my! Not to mention frozen meats & veggies (not just the entrées), great deals on things like olive oil (though it's still cheaper at Trader Joe's, so I held out), and a much wider selection of condiments, pastas and ethnic foods. And stuff I NEVER expected to find at Target, like large, tail-on shrimp, which I actually used for my recent Shrimp, Fava Bean & Asparagus recipe. I figured this section deserved a closer look, and that's what I did today.
Here's what I got:
~ 2.5 lbs boneless, skinless chicken breasts - $5.99
~ 2 cans Herdez Salsa Casera (best non-fresh salsa EVER) - $0.69/ea
~ 1 10 oz. container deli sliced honey turkey - $2.84
~ 1 14.5 oz. box Barilla multi-grain penne pasta - $1.99
~ 2 cans Starkist tuna - $0.71/ea
~ 1 loaf Nature's Pride Whole Wheat Bread - $2.49
~ 1 can sweetened condensed milk - $1.39
~ 1 bag frozen mixed veggies - $0.99 (!!!)
~ 1 dz large eggs - $1.29
~ 1 8 oz. block pepper jack cheese - $1.89
~ 1 lb (4 sticks) sweet cream butter - $2.39
Grand total: $24.06!
Now, it's not the most amazing $25 Shopping Cart I've ever done as there was no fresh produce, but I think I did pretty well regardless. A lot of the stuff I bought was name brand, which I don't usually buy unless there's a particular brand I'm devoted to (hello, Wish Bone Italian Dressing! Just $1.39 @ Safeway this week, btw), so I was a bit surprised to see the prices Target was selling them for. If my shrimp had actually been in stock I would have gotten those instead of the chicken breasts, but I couldn't pass up the deal on that chicken, especially considering they were boneless & skinless (that always costs more). The sweetened condensed milk was a bit of a splurge, but I use this a lot for popsicles and other dessert recipes. The butter was the last thing I put in my basket because I already had a stick in my fridge at home and don't use that much, but I reasoned that butter can be frozen and it comes in handy for things like crepes & omelettes. All in all, I was quite satisfied with this particular cart of food, as it would beautifully augment the bare bones staples I had left in my kitchen.
Here are some ideas of what I can make with what I bought (and what's in my kitchen, of course. Always take inventory of what's on hand before going shopping!):
~ Chicken w/pasta & veggies
~ Pasta & Tuna Salad
~ Herbed Chicken Crepes w/Fresh Rosemary Cream Sauce
~ Banana Caramel Parfait Shots
~ Mushroom & Spinach Quesadillas (using pepper jack instead of gouda) w/salsa
~ Turkey & Avocado Sandwiches
~ Scrambled Egg & Tomato Sandwich
Again, this is just an idea of what I could make with the provisions I purchased today, and though this list includes things I've already posted on PGEW, you know I'll probably come up with something new anyway. The point is, if you stick to your guns & don't get tempted by pre-made entrées and processed foods, and if you keep a running inventory of what you already have in stock in your pantry & kitchen, you really can make a small amount of money go a long way. You don't have to spend your money on greasy, bad-for-you fast food, when you can do much better at home!
Stay tuned for the next edition of The $25 Shopping Cart in the next few weeks. And don't forget, some fabulous new recipes are coming this weekend!
Lv,
PG