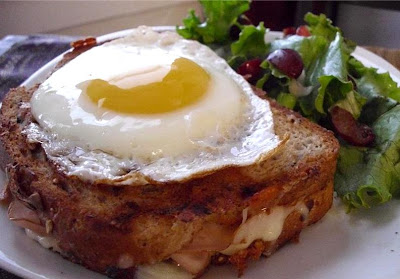 One of the things I've learned along this journey I like to call Poor Girl Eats Well is that a lot of fancy sounding food isn't as complicated as one would think. I remember the days last year when I was petrified about trying my hand at risotto-making, only to realize it was a cinch to make and that I probably just wasn’t too keen on the idea of standing & stirring for 30 minutes in a row (I prefer perching daintily on a lily pad while I cook). I’ve experimented with ingredients I’d enjoyed eating but never cooked with before, and have realized that I am swiftly becoming the queen of making sauces out of anything, when I once believed I only rocked at homemade spaghetti sauce. So I’ve basically started to unravel the mysteries behind certain dishes, cooking techniques and types of cuisine in my own kitchen, and I must say it’s just as much fun as enjoying it all in restaurants.

This next dish isn’t all that mysterious, per se, but I think it’s the idea of having something traditionally “French” that makes me all giddy to make it. Ever since my parents took me to my first French restaurant at the tender age of 8 and I experienced such rich, incredible food, I have been absolutely in LOVE with French cuisine. However, I’m still a little too kitchen-shy to pull a Julie Powell and tackle anything too complex just yet. But when I was planning my Mother’s Day brunch, I wanted something a bit different from my usual brunch menus which normally consist of omelettes or crepes, and the way everything was falling into place with the salad and the parfaits being slightly French-ish, I figured a Croque Madame would be the perfect entrée.

It’s essentially a fancy grilled ham & cheese sandwich. Well, the Croque Monsieur, is. There are many variations of the Croque Monsieur, and the Croque Madame makes itself special by topping the finish product with a perfectly fried egg (and we all know how good fried eggs are on sandwiches!). Croques Madame & Monsieur vary from café to café in France (or so I’ve read), so you really have a lot of room to play around with this. Some recipes call for mayonnaise, others call for lots of butter; personally, I like to use a homemade honey & Dijon mustard blend on mine, as I feel this accents the rest of the flavors beautifully. Traditionally this calls for Gruyere cheese and that’s how I made it for me mum, but I have slummed it in the past and used lesser cheeses (I think I’ve even used string cheese before! When you have a craving, no other ingredients work to make a decent meal, and you’re too broke to go to the store, you learn to improvise!). And when I’m really in dire straits and all I have are those little $0.79 packets of thinly sliced deli meats to work with, I find that they make a lovely substitute for the nicer smoked ham that may cost just a bit too much during scary week.

What I like best about this is that you can have it for breakfast or dinner, and it just feels slightly more grown up than a regular grilled cheese. It’s great for those nights when you’re too busy to cook anything too complicated, and when paired with a salad you have a perfectly wonderful meal. And at just about $3 per sandwich, even if you were to use Gruyere, you’ll fare far better than you would by spending $5 to $6 on a fast food burger. And you can say you had French food for dinner. ;)

Poor Girl Tip: If you want to make this with Gruyere, buy yourself a small chunk that you can reasonably afford and grate it instead of slicing. You will yield about twice as much cheese without having to spend more!

Whisk together the Dijon and the honey until smooth and set aside. Spread a small amount of butter on each slice of bread and place face down on a heated skillet (use medium heat for this). Grill for about 30 seconds or until the buttered side has just begun to brown and become slightly crisp. Remove from heat and brush the honey & Dijon mixture on the grilled side of each slice of bread. Add about 2 oz. of grated Gruyere on each slice. Melt about 1 tablespoon of butter in the same skillet and place the cheese covered bread slices in it to grill (cheese side up, of course) and top each slice with equal amounts of sliced ham. Put both sandwiches together and grill over medium heat for about 3-4 minutes on each side, until the cheese has melted and the bread is golden brown & crisp. Remove from heat & cover to keep warm.

In a smaller pan or skillet, melt 1/2 teaspoon of butter and cook each egg sunny side up for about 2-3 minutes over medium low heat until the egg white is completely set and the yolk is cooked but not completely set. If you like a harder egg, flip the egg over and cook for another 2 minutes or so. Slide a fried egg onto each sandwich, serve with a nice salad, and enjoy! (Enjoy immediately… you don’t want this one to get cold!)