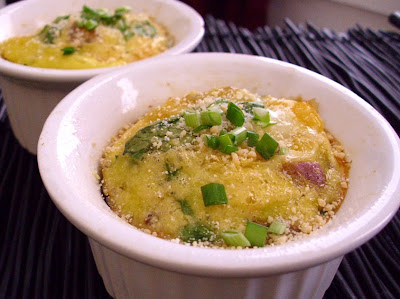 So I've mentioned on Facebook that I'm having MAJOR insomniac issues this weekend. I'm not sure if it's because of the stress of my apartment building being sold and not knowing if I'll have a place to live, or if it's because I'm not sure if I'll have a job past the end of this month, but apparently Poor Girl's subconscious mind is dealing with some stuff that won't let her sleep. Still, my sleep loss is your gain and I've whipped up a few fun recipes that I'll be posting in the next few days (one of which will be posted later today). But despite the insomnia, I realized this morning that I absolutely HAD to eat something substantial before I got sick, so I decided to kill two birds with one stone and create a new breakfast recipe that I could share with everybody.
As well as I did with my awesome food shopping last weekend, I have to admit I neglected to buy enough breakfast options. Sure, I have a few breakfast quinoa recipes I can whip out if worse comes to worst, but for a Sunday breakfast I like to have something a little more special. When I peered into the fridge I found I had very few eggs left, so I couldn't make the egg-filled crepes that I had originally been craving. Baked eggs seemed like a fun option but I wasn't really feeling the ingredient combos I could make out of what I had. However, I did find baby spinach, chives and the red potatoes I bought at last weekend's farmer's market, so I decided these could actually make a fun little frittata. Problem was, I only had 4 eggs. That does not a decent-sized frittata make! Unless it's a very tiny little frittata, and with some cute little ramekins in my kitchen, I knew I could make some pretty tasty, tiny breakfasts.
This is another great way to entertain any guests you might have over for brunch on a nice weekend, as they give a slightly nicer presentation than a standard frittata and definitely keep the portions under control. The best part is, you can make these out of just ONE medium potato? How many recipes can serve 3-4 people using just ONE potato? And don't let the small size of these little guys fool you, either; just one is enough to be satisfying, actually, and if you serve it with a side of fresh fruit and a slice of whole grain toast, you have a fabulous, perfectly balanced breakfast for just pennies. Gotta love that!
Red Potato & Spinach Mini Frittatas (makes 4 mini frittatas; total cost per serving: $0.65)
1 medium red potato, diced into 1/4" cubes
4 baby spinach leaves, finely chopped
4 large eggs
1 T grated Parmesan cheese
1 T olive oil, divided
1 T chopped chives (for garnish)
Salt & pepper to taste
Preheat oven to 350°. In a small skillet, heat 1/2 tablespoon of oil and add the diced red potatoes. Sprinkle with salt & pepper and cook over medium heat until slightly browned and tender. Remove from heat.
Grease four 3 oz. ramekins with the remaining bit of olive oil (you may not need it all; that's okay). Place equal amounts of the pan-fried potatoes in each dish, followed by equal amounts of chopped baby spinach. Lightly beat the eggs together with the parmesan cheese in a bowl, then pour equal amounts of egg over the spinach & potatoes in each ramekin.
Place the ramekins into the oven and bake for 15-20 minutes or until the egg is set. Allow to cool for about 2 minutes, garnish with a tiny amount of parmesan and chopped chives, and enjoy!