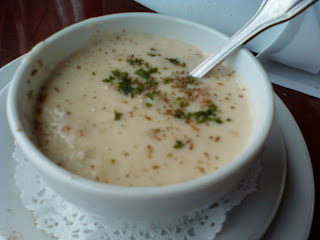 The next day we focused on Cannery Row, and again decided to make use of the coupons we had for freebies. By this time I'd learned that The Fish Hopper, another highly recommended restaurant by locals, was part of the same family of restaurants owned by the Shake family, so I figured we'd be in for some more great food. Naturally, we had to stop and sample some of their clam chowder before we went inside, and it was hands-down the best chowder of the weekend! We definitely knew we'd be having some for lunch and couldn't wait to see what else The Fish Hopper had to offer.

We started off with steaming bowls of the clam chowder and some White Zinfandel because my mom wanted to toast to a fabulous mini-vacation. The chowder was thick, creamy, and packed with fresh clams, a welcome change from most clam chowders that feature the canned variety. It was also nice to partake of a clam chowder that wasn't filled with potatoes, which is one of my biggest pet peeves about most restaurant chowders. The warm, fresh sourdough bread we were served was the perfect accompaniment to our soup and I would have been perfectly content leaving lunch at that. 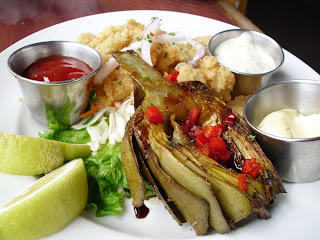 But we had another coupon for a free appetizer, so we handed it over to our excellent server, Nicole. We ended up with the same Grilled Artichoke and Fried Calamari appetizer we'd had at the Grotto the night before, possibly because that was the chef's choice that week, but neither of us were bothered by that. I felt that the grilled artichoke from Old Fisherman's Grotto was much tastier than The Fish Hopper's, as it seemed to have been marinated a bit longer and grilled just a bit better. Mom graciously let me have about 3 pieces of calamari (she argued that since I was eating the artichoke, her "half" of the appetizer was all the calamari; and people wonder where I get it from, lol), and I found it to be far better than the Grotto's calamari. It was hot & crispy, right out of the fryer, so there was no chance for the breading to get soggy at all. If I could have combined the Grotto's artichoke with it, I would have had the perfect appetizer. 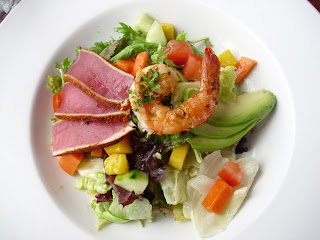 For our main course we decided to split one of The Fish Hopper's entrée salads. It took us forever and a day to come to that decision because their pasta dishes looked absolutely phenomenal. Still, we needed to stick to a certain budget and having the wine added to our bill, so we decided it'd be best to split something instead of ordering two entrées. The California Seafood Salad seemed the most appealing to both of us, and I'm happy to report that we made the right choice. Perfectly seared ahi tuna and giant grilled prawns were served atop a bed of crisp spring greens with fresh papaya and mango, a lovely honey-mustard dressing rounding out the dish beautifully. Though I would have happily devoured the entire portion myself, it was still quite satisfying when split into two portions, especially after having a bowl of that hearty clam chowder. 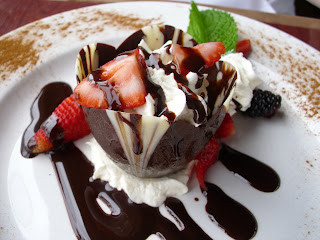 Since we had a server who actually cared about her guests, we were offered dessert via their dessert tray, filled with mock-ups of each dessert that's served at the restaurant. I know it was made of wax, but I was instantly drawn to the Vanilla Creme Brulee, while Mom was all about the chocolate mousse. We'd considered splitting a dessert but because we were both adamant about our choices, we ordered one of each, on the condition that neither of us would be allowed to try the other's dessert (this is why people think we're sisters - we are ALWAYS bickering!). Mom's chocolate mousse was served in a delicate dark & white chocolate "cup" and topped with hundreds of fresh berries and thick, homemade whipped cream. My vanilla creme brulee was so beautiful it hurt, the golden brown top shell caramelized to perfection, reminding me of that brief scene in the movie, Amelie, where she describes cracking that top shell as one of her simple pleasures. Topped with some of the same gorgeous berries my mom was served with her mousse, this was a wonderful dessert that was so generous in portion I couldn't finish it all. 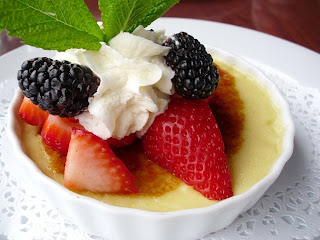 Service-wise, our experience at this restaurant was the complete opposite of what we'd dealt with at Old Fisherman's Grotto. Our server, Nicole, was probably one of the best servers I have ever had the pleasure of meeting. She practically oozed personality and made everyone in her section feel like they were her only guests. Though the food was equally good in each restaurant, having a server like Nicole would have made all the difference in the world had we had her serve us at Old Fisherman's Grotto the night before. Alas, that was not the case, but I made sure to let The Fish Hopper's GM know about our excellent service and wonderful food. After years on the front lines of the restaurant business, I know that compliments are few and far between compared to the complaints, so anytime I can let management know how well their restaurant is doing, I do so immediately.

Overall, both restaurants were wonderful, each with its own distinguishing features. The fact that they both offer seafood that is sustainably and humanely raised was just the icing on the cake for me, since I'm always trying to find food that is good for me and for the rest of the planet within my very limited means. Sure, visiting these types of establishments can't be done everyday, but it's good to know that there are places you can visit on your vacation that feature great food, good specials, and spread good karma by choosing the right foods to serve.