Last weekend, Mom and I decided to take a quick trip to beautiful Monterey and Carmel-By-The-Sea. It's the first time she's had a vacation in 15 years (!!!), and though she wanted to take a bigger, more elaborate trip, times are tough and we decided it was best to be budget-conscious and stay relatively close to home. It had been way too long since we'd been to Monterey, so we totally did the tourist thing: visited the historic state park, walked through Cannery Row, spent hours in the awe-inspiring Monterey Bay Aquarium, and took in the sights, sounds and tastes of Fisherman's Wharf.

Those of you who have been to the more touristy spots of Monterey know that part of the fun includes sampling all the delicious seafood chowders from the dozens of restaurants that line the boardwalks. Staff from each restaurant vie for your attention by offering little cups of steaming hot chowder, and if you plan your route just right, you can have a pretty swell little lunch on clam chowder samples alone. But the lure of many of the Wharf & Cannery restaurants' displays of incredible seafood platters proves too hard to ignore, and eventually you want to have a full meal. There were several great joints that Mom & I were willing to try but again, we were on a budget and needed to be conscious of that. We decided to make things easy on ourselves and take advantage of the zillions of coupons offered to tourists, including those for free appetizers at some of the more popular restaurants. 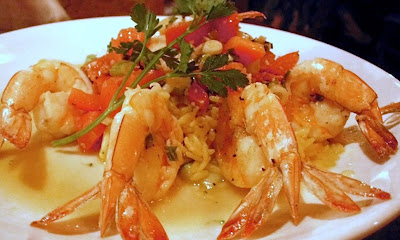 On our first night, we decided to try out Old Fisherman's Grotto. I felt they had the best clam chowder of all the samples we'd tried that night, and their prices were reasonable compared to some of the other seafood restaurants in the area. Owned by the Shake family, Old Fisherman's Grotto has been around for over 50 years and proudly boasts being the most recommended seafood & steakhouse on Fisherman's Wharf. The large crowd that packed the place that night definitely proved that, and we couldn't wait to try the food and see if everyone was right. While we waited for a table to open up, I took in the old family style decor, complete with plenty of pictures of notable dining guests posing with the gentleman I figured out was the current owner, Chris Shake. I was immediately impressed with Chris, who greeted us at the door and helped the host staff seat the guests. It reminded me of watching my dad in action when he was a restaurateur, and of visiting restaurants like Chef Chu's in Los Altos, where the owner or GM dives into every aspect of how his restaurant is running. Since I'm such a stickler for service, personal attention like that always scores points with me.

Eventually we were seated near one of the windows that looks out onto all the shops on the wharf, which was fun for people watching purposes but not so much if you were trying to stay warm. Our server came to our table to take our order quite quickly, but sadly, that was the best part of the service she gave us that night. She was stoic, unfriendly, and didn't discuss specials or ask if we had any questions, something I noticed other servers and even bus staff were doing at other tables. We kept our hopes up though, and handed in our coupon for our free appetizer. After a fairly long wait, we were served the chef's choice combo appetizer of fried calamari and grilled artichoke. The calamari was lightly breaded and nicely cooked, but the grilled artichoke was sensational! I'm not the biggest artichoke lover, but this is one way I could become a total devotee. Marinated in balsamic vinegar and served with lemon-dill aioli, the artichoke was grilled to perfection, the dark sweetness of the balsamic lending an incredible flavor I wasn't expecting. Mom can't stand artichokes, so I happily devoured that part of the dish myself, taking mental note to try artichokes this way at home sometime.

Candles were lit and our windows were closed as we waited for our entrées. Mom noticed it took a considerable amount of time to get our dinner after we'd finished our appetizers, but I figured the full house would cause some delay in turnaround time. Eventually we were served our fabulous entrées, both of which we enjoyed tremendously. Mom ordered the Shrimp Scampi, which was served with saffron rice and grilled vegetables. Instead of the usual small shrimp most restaurants put in their scampi, the Grotto generously presents six giant prawns atop a bed of delicately flavored saffron rice, all enhanced by a beautifully seasoned garlic, lemon & butter sauce. 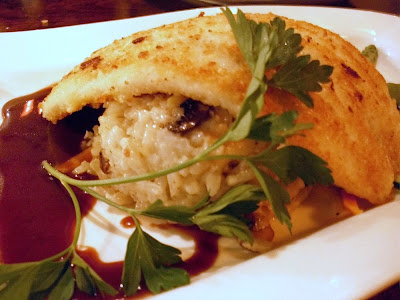 I ordered one of their specials, the Parmesan Crusted Sole, accompanied by a mushroom risotto, grilled asparagus and a pomegranate sauce. I was a bit confused by the combination as the pomegranate sauce didn't seem to make sense with the rest of the dish, but it actually worked in an interesting way. The sole itself was cooked perfectly and the mushroom risotto an absolute work of art. I was a bit sad at first because I only saw three large asparagus spears poking out from under my giant filet of sole, but was pleasantly surprised to find a mountain of seasonal veggies hiding underneath. It ended up being such a large amount of food that I knew I'd have to take some back to the hotel. After all, Poor Girl always plans her meals by selecting dessert first, so I knew I needed the extra stomach room to fit in the Macadamia-Coconut Pie that was also listed as a special.

Unfortunately, that never happened. My mom had barely set her fork down when our server appeared and rudely asked if we were "done". She completely ignored me and whisked away my mom's plate, leaving me to flag down a busser for a to-go box. Another long wait and our server returned, not with offers of dessert or a "How was everything?" but with our check, which she sort of tossed in my mom's general direction as she turned to leave. Mom & I both looked at each other in shock and decided we'd just pay and get dessert elsewhere, but it just took away from the excellence that was our food to have such lackluster service. I understand that servers have bad days too, but that didn't seem to be the case with this gal. I've been to enough restaurants from the smallest hole-in-the-wall to fine dining establishments to know that not everyone is cut out to be a server, and I'm fairly certain that was the case with our server that evening.

On our way out, however, I did have a chance to speak with Chris, who was quite friendly and profusely apologetic for the unfortunate service. Though I kept raving about the food, he wanted clear examples of how our server had failed to complete our experience at the Grotto. His attention and sincere desire to change whatever hadn't pleased his guests made a big difference, and I know I'll definitely be back the next time I'm in Monterey, not just because of the amazing food but because Chris Shake and most of his staff do care about their guests. Besides, I never did get to have dessert that night, and from what I saw other diners having, I know it's worth going back!