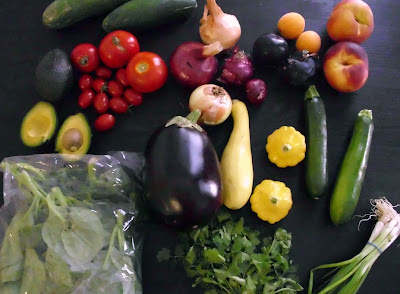 I love it when serendipity takes over PGEW.
I'd had every intention of making another trek out to the 99-cent Store last month for a more leisurely $25 Shopping Cart experience, but somehow those 31 days of July flew by so quickly I barely had time to blink. Filled with events, mini-vacations, and a new broken bone (hey, I went a good 5 months without breaking/spraining/dislocating anything; I was long overdue), July was busy & exhausting. And with the drastic cuts to the public transit system in this area, heading out to run weekend errands outside of Midtown is no longer the easy, breezy affair it once was. Sadly, a trip into the Rosemont area of Sac was not in the cards.
But that's okay! There are a gazillion reasons why I live in Midtown, and proximity to eating establishments and stores is one of them. The Sunday morning farmer's market under the freeway at 8th & W isn't exactly next door to me, but even when I'm not hobbling around with a broken pinky toe, it's a cinch to get to. Plus, it offers me a kind of shopper's high that I only get at places like Trader Joe's right when they open in the mornings. Or Sephora. Don't worry, I won't go on and on about how much I *heart* the farmer's market, since I've already done that enough this year. But I do find it rather odd that I have yet to devote one post of this series to the amazing deals I find regularly at the farmer's market.
Now, most of the prices at the farmer's market are far more reasonable than what you'd expect to pay at a regular grocery store for fresh, sustainably grown produce. Cilantro for $0.25/bunch compared to $0.99/bunch or more at a regular store is a favorite example of mine, but there are a ton of great deals at your local farmer's market if you look carefully. Perhaps it was because I was walking a bit more slowly due to Evil Toe, but for the first time I noticed one particular stand offering a sale! Not the it's-the-end-of-the-day-and-we're-getting-rid-of-extra-produce sale, but a bona fide save-some-money-on-some-clearance-stuff sale. There, in a plain cardboard box hidden behind all the "pretty" produce, was a stash of "cosmetically challenged" peaches, nectarines and black plums at just $0.50/lb. !!!!!!!!!!! I mean, seriously! The last time I was that smitten with some banged up produce was when the Sac Natural Foods Co-op had their "clearance produce" section. Sure, some folks may see a bruiséd peach when they visit that particular box, but I see peach preserves and peach pancake syrup, both homemade and affordably priced.
Here's what else I was able to snag at this weekend's farmer's market:
Grand total for this trip: $25.75!!!
To tell you the truth, I hadn't planned to do a $25 Shopping Cart there until I counted my change and realized I had spent just $0.75 over the magic number. Granted, not everything I listed is featured in the posted photo, but that's only because my apartment is about the size of a thumbtack and there are only a few spaces where I can take photos of a ton of food. And despite my awesome memory, I don't always recall the prices of everything I buy, so some of the prices are missing in my list. Still, if I were to have purchased the exact same list at a regular grocery store, I would have had to start selling bodily organs to pay for the bill. My farmer's market produce was fresh, ripe, and full of delicious summer flavor, yet I left knowing that none of this good-for-me food was costing me a day's worth of pay. Which makes everything taste just that much better.
So what will I be doing with all this sexy produce, you may be wondering? Grilled Eggplant & Veggie Sandwiches will surely be on the list, as well as the aforementioned peach preserves and/or peach pancake syrup. But when added to one's bare bones staples and some great spice combos, there's no end to the tasty possibilities that fresh, affordable produce can provide! If I could do so within my urban city limits, I'd grow more produce than I already do (currently I only have tomatoes & basil, but hey... that's enough for a pasta sauce, right?), but since I can't, the farmer's market will provide for me. And once I add all these awesome fresh fruits & veggies to them, even the simplest grains & legumes can turn into amazingly tasty, nutritious, and affordable meals.