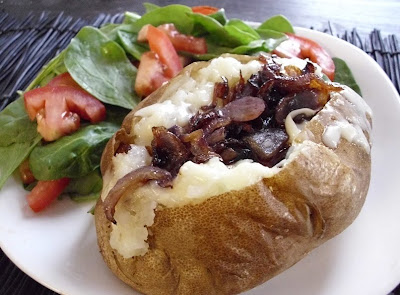 It seems that it's quite common for most Hunger Challengers to find the middle part of the week the most difficult.  I found this to be the case last year and I've definitely felt it this time around.  In my case it's because I'm a grazer - I like to nibble on little things throughout the day rather than have three larger meals, partly because I get full easily and partly because I'm slightly hypoglycemic. The problem with that kind of eating during something like the Hunger Challenge is that it's easy to forget everything I've nibbled on and it can quickly add up to more than the allotted $4/day budget.  Making that transition from grazing to three squares a day is not easy, and by Day 3, I really start getting cranky.

Fortunately, I learned from last year's experience on the challenge and invested $0.99 on a 6-pack of those little boxes of raisins to help tide me over in between meals.  The crankiness does go down some with this easy, healthy snack, but the same snack over and over can get boring really fast.  Another conundrum.  But stepping back and studying this behavior a bit more objectively, I noticed that this is something that folks who live on such limited means face on a regular basis: boredom with food due to lack of options.  Whether it's the weekly bag of groceries supplied by the local food bank, or the same items on the value menu at a fast food restaurant, there isn't much variety available to a person who can only afford so much.  Part of this is probably due to a lack of education, although most food banks are starting to offer classes on how to make the most out of the food items they donate to the needy; but again, the types of foods that do go into that bag tend to vary only slightly from week to week.

Part of why I eat so well either on or off the challenge is because I do try to add as much variety to my meals as I can afford.  Whether that's jazzing up a grilled cheese sandwich with sautéed mushrooms and thick slices of tomato, or coming up with yet another quinoa salad, I play mix & match with my food all the time so that I don't get bored.  It does get a little harder during this Hunger Challenge, but I love that I'm forced to get more creative than I usually am.

Case in point: my dinners for the third & fourth days.  Since I'm trying not to dip too far into the other staples I have in my kitchen (though there are some bare bones staples I can't seem to live without), I'm making the most of the items I picked up on my little $15 Shopping Cart trip to Grocery Outlet.  On Day 3 I decided to glean inspiration from a really old PGEW recipe - Open Faced Fontina Sandwiches with Caramelized Onions & Shallots - and jazz up a baked potato.  Had I been smart enough to take some of my $3.76 chicken out of the freezer to defrost on time, I probably would have thrown chicken in there as well.  But it's always good to have a meatless dinner a few times a week, so I was perfectly content with the following recipe.  A small salad from  my $0.99 bag of baby spinach and a tomato, and dinner was served.

Preheat the oven to 400°.  Gently wash the potato well and pat dry with a paper towel.  Pierce the potato several times with a fork, then bake for about 40 minutes or until the potato is cooked all the way through.  In the meantime, heat the oil in a medium skillet.  Add the onions, salt and sugar and cook over medium low heat until the onions are translucent and a deep brown.


When the potato is done, allow to cool for a few minutes before handling then carefully slice the potato lengthwise.  Add the butter and mash the inside of the potato lightly with a fork.  Add the cheese and allow it to melt before topping with a generous amount of caramelized onions.  Serve with a nice salad and enjoy!


*Hunger Challenge Tip: Grating the cheese will yield more than slicing or dicing it, allowing you to stretch that block of cheese even further!

Along with another bowl of cornflakes & blueberries for breakfast, some leftover chicken fried rice for lunch, and the inevitable box of raisins, the grand total for Day 3 was about $3.75.  Another successful day!