Note to self: Never begin a hunger challenge on International Chocolate Day.  It's just too cruel.

Note to self: Hunger does not recognize holidays, whether they're official or unofficial.  Hunger is cruel.

Granted, I didn't really know it was International Chocolate Day yesterday until I hopped onto Twitter and saw all the evil chocolate tweets all over the place.  As a huge chocoholic, seeing all those tweets about chocolate tortes and ganaches and mousses (oh my!) was making my mouth water.  But then I smacked myself mentally and remembered that for those who are truly hungry, everything will make your mouth water.  So I closed Twitter and decided to focus on the challenge ahead. 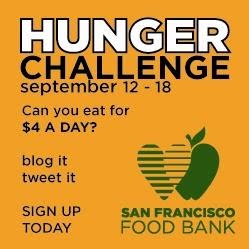 It's my second time around participating in the San Francisco Food Bank's Hunger Challenge.  The challenge:  Live on only $4 of food per day for a week.  That figure comes from the average amount of aid a typical food stamps recipient has to work with each week: $28.  This includes beverages, snacks, and every one of your three squares a day.  A difficult task, indeed.

Last year I went into it with a completely different mindset than I'm dealing with today.  Though I was still struggling financially, I was more gainfully employed at a place where, even as a temp, I received things like holiday pay and overtime: two things that help a great deal when you're not on a permanent payroll.  This year, I have the experience of actually being on SNAP under my belt, as well as the threat of being unemployed for the second time this year, like so many other folks in the U.S.  My last temp assignment ended quite abruptly just a few days after I'd already been offered and had accepted a permanent position, while the one I'm currently on is contingent upon state and federal funds.  Having no real answers or budgets in place, it's safe to say that I will have no job as of September 30th.  A very grim fate indeed, especially considering I haven't fully recovered from the six weeks of unemployment I faced earlier this year

So by the time this challenge rolled around, life circumstances seemed to put me in just the right spot for this task.  Though I'm aggressively looking for jobs, I'm trying to be realistic and starting to look at this as "practice" for what may be inevitable - a return to SNAP.  So for me, it's not just an exercise in awareness, it's an exercise in survival.  I have $0.43 in my bank account and because of my recent heart & lung problems, I missed about 3 days worth of work last week.  For a temp that means a good 24 hours of pay that will not be on my next paycheck.  When you live paycheck-to-paycheck and on borrowed time, that kind of financial hit is like a kick in the gut: it takes everything out of you.  So despite my relatively well-stocked cupboard, I didn't have much to work with to add to my pantry & fridge. 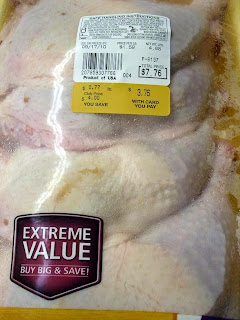 However, I knew I was going to go on the challenge about a month in advance so I did have time to prepare, something a lot of struggling folks don't have the luxury of doing.  I hoarded a few vegetables & fruits from the farmer's market; I scoured grocery store ads for the deals that would best suit me for this week and beyond; and I dug into my own stash of Poor Girl recipes to see what I could do with the food I had.  Because I know what I'm doing, this is easier for me than some challengers (and folks who are actually in this position), but I'm not kidding when I say that it is hard to plan for something like $4/day.  Many people spend twice that amount at least twice a day going out for lunch and dinner, not to mention the extra lattes, energy drinks, and frozen yogurts that seem to be such a necessity to some.

Anyway, my homework proved to be quite useful.  Through one of their weekly circulars, I learned that Safeway was offering an awesome deal on chicken leg & thigh quarters.  At just $0.77/lb, this was a perfect way to get a good amount of protein that I could stretch out over several days.  My "Extreme Value Pack" of five fairly large leg & thigh quarters was definitely an extreme value: just $3.76!  SCORE!  My other great food find was the new Grocery Outlet here in Midtown Sacramento, which opened about a month ago (finally!).  A lot of you $25 Shopping Cart fans have suggested I head to this mecca of food bargains, but with both previous locations being out of my travel range because I don't have a car, I was never able to head there for this feature.  Now that we Midtowners have one of our very own, I have yet one more place to add to my list, so stay tuned for that later this month.

I did do some quick shopping there for the Hunger Challenge, though, and left with about $15 worth of groceries to add to what I had at home.  I was quite surprised at the selection in certain departments: I never expected Grocery Outlet to be the type of store to carry fontina and sheep's milk goat cheese, let alone the scallops, tilapia and ahi tuna steaks I saw in their frozen section.  Not wanting to get too carried away, I focused only on certain foods and left with:

I don't have my receipt handy (or a photo either, d'oh!), so I can't give you the prices for each item, but I do remember that my grand total was $15.72!  Not bad at all.  Between that, my $3.76 chicken, and some stashed produce and Bare Bones Staples, and I was ready to start Day One.

With or without chocolate.