I had meant to post this last week but I have been dealing with some pretty serious pulmonary & cardiac issues as of late.  Rest assured, I am on the mend, but please accept my apologies for posting this so late.  -Kimberly 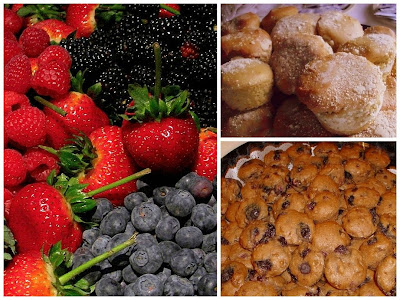 Did you know that I'm a recipe developer?  Or that bread is actually a gel?  Have you ever tried describing a lemon without using words like "citrus" or "sour"?

Our second and third days at the IFBC were chock full of  panel discussions and activities like these, making the weekend both fun & informative. Session highlights from Day 2 included... 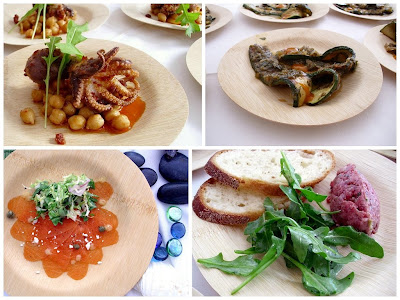 To prepare us for such a full day, we were first treated to a continental breakfast of baked goods (both regular and gluten-free) and the most impossibly gorgeous, sweet, juicy berries from Driscoll's.  The latter pleased me immensely considering my recent blueberry obsession and I think at least 40% of the food I consumed the whole weekend was pure anti-oxidant heaven (could. not. stop. berry snacking!!!).  Our lunch was a fabulous spread of small plates from some of Seattle's premier chefs, as well as a wonderful selection of wines.  My favorites included...
After another great session featuring folks from Theo Chocolate, Oregon White Truffle Oil and Full Circle Farm, which showed us where their amazing foods come from and how exactly they come to be what we as customers consume, we wandered over to the pre-dinner cocktail party, sponsored by the Secret Sherry Society.  A wide selection of different sherries and sherry cocktails were accompanied by delicious appetizers like Croque Monsieur and Lamb Meatballs (sweet Jesus, I've never eaten so much lamb in my life!).  Our spirits high and bellies content, we listened to a truly inspirational speech from Saveur Magazine's editor-in-chief, James Oseland, before we were treated to dinner. 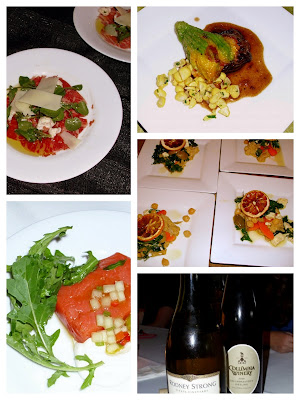 I apologize in advance for not taking more and/or better pictures of the food, but the lighting was quite bad for such an endeavor.  Suffice to say that it was a meal of epic proportions.  There was an amazing polenta dish, beef carpaccio, a lovely little salmon dish whose proper name I can no longer remember (but the memory of its delicious flavor still lingers on my tongue), and my absolute favorite of the entire night: BEEF CHEEKS.  I don't often yell about food on this blog but if I could, I would happily stand atop Mount Everest and proclaim the deliciousness of these BEEF CHEEKS until my throat goes raw and lungs collapse from lack of oxygen and amazement.  If the BEEF CHEEKS and the LAMB POPS were to rumble in a cage, UFC style, I honestly wouldn't know which to root for, such was the amazing flavor of both.

The official desserts were good, but the only one I remember was the one that was actually served to us by volunteers: the molten lava chocolate cake.  Granted, this is not a new concept by any means, but when a dessert is done properly, it really doesn't matter how "trendy" it may be.  This was bittersweet, oozing with melted chocolate, and rich enough to only require being a couple inches squared in size.  I believe there was a salted caramel drizzle involved as well, but I was so high off the chocolate opioids that there could have been capers involved and I probably wouldn't have noticed.  Had I not been so full on beef cheeks and wine, I would have happily sweet-talked one of the cuter volunteers to bring me another.  Or fought Catherine for her piece (Shhh!  Don't tell her I said that!  ;-) ).

Day Three recap up next!