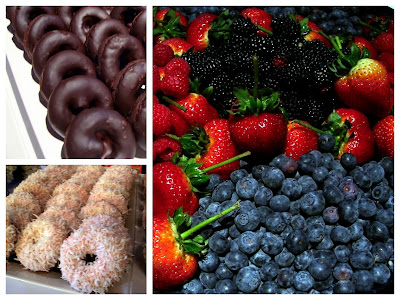 Our breakfast on Day Three was very much like Day Two's, only this time they brought in huge, sinful donuts and apple fritters to add to the sugar-laden feast.  I split an apple fritter with Allison but never did get around to eating it, such was my crazy blueberry snacking throughout the day.  Because we desperately needed protein, Allison, Catherine, Andrew and I all headed to Roxy's, a fun little diner located a few blocks from Theo Chocolate Factory.  There we enjoyed eggs, eggs, and more eggs (so. many. choices!), and some of the best country potatoes on the planet.  Allison also enjoyed her parsley with more enthusiasm than I've ever seen given to the leafy green herb. We returned to the conference full, content, and energized with protein instead of the constant sugar being offered.

Day Three's sessions began with one that I had honestly considered missing: Food Blogging for Specialized Diets.  Now, it's not that I don't want to learn about these things to bring the best possible content to my diverse population of readers or anything; I just really needed a break to blog and tie all my thoughts together (I'm not like some of the bloggers at the conference, able to blog on the spot without obsessing over the editing process; shame on and/or good for me!).

As it turns out, the first session of the day was an engaging, inspiring, and entertaining session led by Shauna James Ahern of Gluten Free Girl and Alex Jamieson, author of Living Vegan for Dummies and The Great American Detox Diet.  They were so real and so incredibly fun that it was impossible to do anything but pay attention to them (I think the fact that I'd finally had some protein in my breakfast helped for the concentration bit, too...).  What struck me as interesting was that regardless of topic, we "specialized" bloggers all share a common goal: to bring our knowledge to the public with our own bits of expertise.  We also face a ton of criticism for being so specialized, with the gluten-free and vegan bloggers being targeted for their *gasp!!!* meatless offenses, and I, as a budget food blogger, attacked for having the nerve to own a laptop computer (which happens to be a Christmas gift from my extremely awesome mother).  What they both made clear is that we're not going to please all of the people all of the time, and that is okay.  If I could have left with only one lesson that entire weekend, that would have been the one. 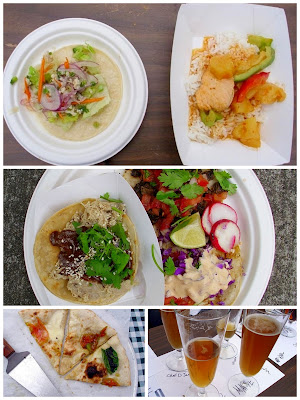 Day Three's lunch was provided by some of Seattle's best food trucks, giving us plenty of fun, tasty options to choose from.  Unfortunately, when you set free 250 ravenous food bloggers, the lines for each truck were huge, making it difficult to navigate or to even see the selections.  We'd also been given a few assignments over lunch, and because I'm such a nerd and hate standing in line, I focused on making pictures first.  Eventually I was able to enjoy some food...
I couldn't possibly eat anymore than I already had (I didn't even eat the tortillas from any of my tacos so I wouldn't get too full), so I have no idea how good Skillet's lamb burgers with arugula and bacon jam were, nor did I try Molly Moon's ice cream.  Word on the street is that they were both outstanding and apparently the falafel and hot dog trucks also boasted some great eats.  To go along with our street food lunch we were served beer instead of wine (*sob, sob, sob*), which I passed on as I am not a fan of beer at all.  But in all fairness, beer does probably go better with a plate of tacos or some hot dogs than a glass of chilled Chardonnay.

But it wasn't all a wash for me.  Though I was probably the only blogger who preferred the small plate set-up of Saturday's lunch & dinner (I guess I'm just more of a grazer than an hardcore eater...  this is why I will move to Spain when I retire so that I can live a life filled with nothing but tapas and good wine), I absolutely adored every dish I tried that day and remained full enough to last me until sushi & cocktails with my friends several hours later.  It was such a delightful treat to partake of the different cuisines offered by these food trucks!  Here in Sacramento, folks have not gotten the clue about this rapidly growing food phenomenon, so the most fun we get to have is the Who Has the Best Taco de Lengua game.  If Sacramento's city council would pay more attention to the opportunities that food trucks can offer the city, rather than "donations" by "interested parties", we could do wonders.  But that's for an entirely different post altogether.  *steps off soapbox*

The fifth - and final, I promise - installment of my IFBC recaps is next!  Stay tuned... there's a even a fun li'l slideshow included. :)