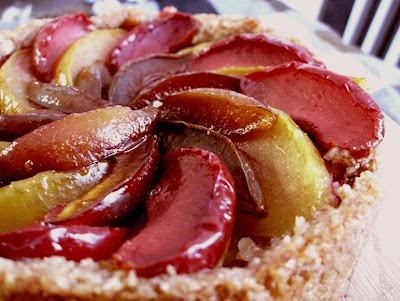 So I've gone completely plum crazy lately.  Not hard to do considering that 'tis the season to have stone fruit. From nectarines to plums, apricots to peaches, stone fruits and their byproducts are everywhere these days.  I had some fun with apricots earlier this summer and even had a brief run-in with my Chicken with Summer Melon & Nectarine Relish recently; but the stone fruit I've been currently obsessed with is the almighty plum.  It started with a spicy, spiced yellow plum jam I made from some yellow plums an officemate had brought to work from her backyard tree.  Then I couldn't help but eat at least one of juicy black plum a day as my late afternoon snack at work.  Finally, after an awesome score of mix & match stone fruit at ye olde farmer's market, I decided it was high time I make my own version of the dessert that is on every food blog right now: a pretty plum tart.
Now, I've mentioned before that I'm not the biggest baker out there - it's just too precise a science for someone like me, who usually cooks by throwing pinches of this and dashes of that together to eventually make something spectacular.  But I do have a serious sweet tooth and because I'm so broke and would prefer to know what exactly is going into my baked goods, I like to dabble in the baking arts from time to time.  Because I'd bought a lovely assortment of different types of plums - black, red, golden yellow, and French prune - I thought it would be fun to use all of these on one tart to experience the myriad of colors and flavors each varietal had to offer.  Then I remembered I don't exactly have the right equipment to make a proper tart crust - a vexing dilemma indeed.  So I rummaged through my cupboards for something I could use to make a decent crust and decided my remaining bag of almonds might just do the trick.
I'll admit I had absolutely no idea what I was doing when I made this crust (or the whole tart, actually), but I'm rather pleased with the results.  With a kiss of cinnamon and a touch of brown sugar, this crust ended up tasting a bit like a graham cracker crust, jazzed up by the nuttiness and texture of the almonds.  Ridiculously simple to prepare, it's a lot less labor-intensive and easier to handle than regular pastry crusts, and adds a bit of protein to a recipe that usually has little to none.  I was also happy to note that this was something my gluten-free friends & readers could enjoy as well.  For now, I'm lucky enough not to have any dietary restrictions, but it's nice to know that I can offer affordable options for those who do.  As for the plums, don't worry if you don't have access to all the different kinds I used in mine; this will be just as lovely and delicious using just one varietal.
Mixed Plum Tart with Almond Crust (makes 6 servings; total cost per serving: $1.75)

Instructions:
1.  Preheat the oven to 400°.
2.  Stir together sugar and cinnamon in a large bowl, then add the plums & lemon juice and mix together until combined.  Let the mixture stand for about 20 minutes, until the plums have released their juices.
3.  Combine the crust ingredients in a medium bowl and mix together with a fork until completely combined and almond mixture is workable.
4.  Press almond mixture into a shallow 9" tart or springform pan.  Arrange the plums in the pan in a flower-shape pattern until all plums have been used.
5.  Pour about half remaining juices on top of the tart.  Bake for 35-45 minutes, or until the top is lightly browned and plum juices are bubbly.
6.  Remove from oven and allow to cool for about 10 minutes.  Transfer to a plate, serve warm by itself or with a side of vanilla bean ice cream, and enjoy!

* Poor Girl Tip: Nuts can be expensive, so to reduce costs, avoid the pre-packaged kind and buy your almonds in bulk.  You can save anywhere from $1-2 per pound by buying whole almonds and processing your own in a food processor or just using a rolling pin and good, old-fashioned elbow grease.