The following recipe is part of the picnic lunch I created for Round 6 of Project Food Blog.  To read the entry and vote for me to advance to Round 7, please click here.  Thanks in advance!  - Kimberly 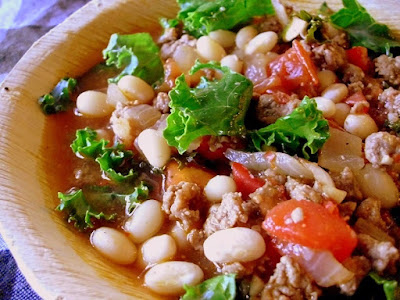 It's a good thing I made such a big batch of this soup yesterday morning because it's all I've been able to eat today.  As you know from my post for the sixth challenge of Project Food Blog , I got hit with the flu Friday night and have spent a pretty miserable weekend because of it.  I literally forced myself to crawl out of bed and cook up a storm during yesterday's storm, and except for the red quinoa cake I made (yes, that recipe is coming, too!), this was my favorite part of the meal.  No offense to my Spicy Red Quinoa with Shrimp or anything; I really liked having that dish, too.  But I've had that before and this was a new soup so chock full of yummy goodness that I have to say it's even better than the quinoa.  Plus, it warms one up from the inside beautifully, which is always a nice bonus if you're not feeling too well.

I'll keep the intro for this short, since I already waxed poetic about it in yesterday's post and I know you all want to read about the cake (SO many requests for that recipe!  Yowza!).  Basically, this soup is a play on traditional Tuscan-style soups that generally feature cannellini beans, kale, and sometimes some Italian sausage.  I didn't have any cannellinis left, so I used freshly cooked navy beans instead, and used some of my Hearst Ranch Beef winnings for my ground beef.  Since this was extra lean flank steak, it kept the fat content to a bare minimum while still packing in plenty of flavor.  Some fresh tomatoes from the Whaley Farm helped my broth taste rich & comforting, and the amaranth I threw in towards the end added an interesting nutty flavor.  Some amaranth soup recipes call for it to be thrown in there much sooner and in greater quantities, but I didn't want to have a gluey, mushy soup; rather, I was looking for the tiny grains to complement the other flavors & textures subtly, which is exactly what it did.  For those non-meat eaters out there, feel free to omit the beef as it will be just as hearty & delicious without it.

Let's check this one out before I dive into another bowl!

Heat a large soup kettle and add the olive oil, garlic and onions.  Cook over medium heat until fragrant and the onion starts to turn translucent but doesn't brown.  Add the salt, chile flakes, rosemary and oregano, and saute for one more minute.  Next, add the ground beef and cook until just lightly browned, about 4 minutes or so.  Add the tomatoes and water and bring to a low boil.  Simmer uncovered for 5-6 minutes to allow the flavors to incorporate, then check for seasonings and adjust according to taste.  Add the amaranth, stir and continue to simmer for another 6-7 minutes.  Add the kale, remove from heat and let stand until the amaranth turns translucent and the kale becomes tender.

Garnish with extra pepper or chile flakes, serve alone or with warm, crusty bread and enjoy!