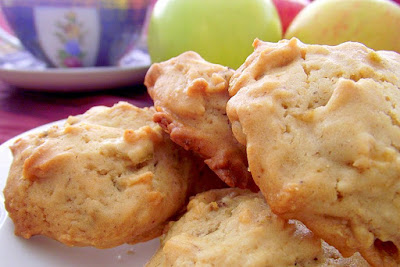 So did everyone have a good Thanksgiving holiday?  I know I did!  Despite the fact that I was hobbling around yet again (yeah, yeah.... Genius over here broke yet another toe; I'm waiting for my Klutziest Person Alive award to arrive in the mail any day now), my mom & I spent a quiet, but fabulous Thanksgiving, filled with a lot of blessings to be thankful for and plenty of good eats.  Like most folks, I'm making the most of my Thanksgiving leftovers, and I do have a couple new recipes to help you make the most of all that extra turkey.  But I know many of you are suffering from turkey overload, so I thought I'd give you all a breather and post a little something sweet first.

It's funny... as much as I like baked goods, I don't know that I've ever baked as much as I have over the past couple of months.  A lot of it has to do with being unemployed, I'm sure; I mean, there are only so many British period dramas one can watch before one's eyes begin to cross and one begins seriously considering wearing bonnets when running errands.  Baking gives me the ability to stretch staples like flour and sugar by creating individual, bite sized treats that I can enjoy for days on end, and it makes me break out of my savory cooking comfort zone.  I've mentioned time and again that I'm not the best baker out there because it requires so much precision.  However, like my knife technique, it's something I knew I needed to practice, so I've tried to make the most of this scary, income-less time by flexing my baking muscles. 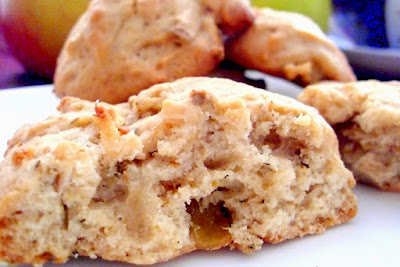 So far, I'm rather pleased with the results, particularly with my baking-with-quinoa experiments.  This latest venture was inspired by the copious amounts of tea I've been consuming to chase away the chill that the past few weeks have brought to this part of the nation.  As much as I love coffee, I don't drink it as much as I drink tea, and because we've been dealing with unusually cold temperatures (for us) and I don't want to run my heater too much, I've been staying warm from the inside out with soups and teas.

But tea without something to nibble on can get a bit boring after awhile, so I thought it would be fun to take some of that tea and put it in a cookie.  I've been obsessed with the idea of baking with tea since I had that Earl Grey Lavender cupcake from Esther's Cupcakes here in Sac (seriously the greatest cupcake on Earth), and decided that chamomile, combined with some of the apples I still had hanging out in Big Bowl, would make a fantastic cookie.

I wasn't sure exactly what to expect, but they turned out beautifully, in my opinion.  Since I prefer softer cookies to harder ones, I made sure to keep things moist so I'd have a chewy end result.  They actually ended up in between chewy and cake-y, which I found to be a perfect accompaniment to my steaming cup of Good Earth tea; had they been more chewy and flat, they would have probably been better for dunking in milk.  The flavors of the tart apple and sweet, aromatic chamomile couldn't have come together more beautifully, and the slight addition of honey in the dough rounded out the "cup of tea"-like experience to perfection.  These are perfect for any time of year, but will definitely make a wonderful new addition to your holiday baking repertoire.  And now for the recipe!

Preheat oven to 350°.  Combine the apples, cinnamon and tablespoon of sugar in a bowl and mix together well.  Set aside.  In a separate bowl, combine the salt & flour and stir to combine.  Cream together the butter, brown sugar and honey in a third, larger bowl.  Whisk in the egg, milk and vanilla until creamy and smooth.  Add the flour to the butter mixture in small batches, stirring together to combine completely in between batches.  Next, add the chamomile flowers and apples, and fold into the mixture to incorporate.

Drop by scant teaspoonfuls onto a cookie sheet that has been lightly greased or lined with a Silpat.  Bake 13-15 minutes, or until a light golden brown.  Cool on a cookie rack for a few minutes, serve with your favorite tea, and enjoy!