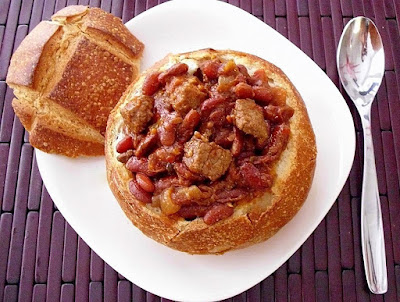 Last weekend I had a yard sale to help raise some money that would hopefully tide me over until I get my second paycheck from my new job (I can't count with the first one, as it belongs to my landlord.  *le sigh*  It'll be fun looking at it, though!).  And though I'm dealing with this evil broken toe/foot (why must I be so friggin' thorough when I injure myself???), I had the feeling that last weekend might bring us the last decent weather of the year.  So I forced myself to haul out all the junk from Evil Closet and put on the sale, putting off decking my tiny halls with Christmas decorations until this weekend instead.  It was an extremely wise move on my part because I wouldn't have been able to do it this weekend.  The weather right now SUCKS!  If you live in the general Northern California area you know what I'm talking about: ridiculous winds, super heavy rain & flooding, and far too much snow.  It's ugly, it's scary at times, and apparently it's going to last until the end of time.  Or at least the end of this week (I like to round up).

Naturally, weather this wretched makes me either want to curl up on the couch with a warm blanket, purring furbabies, and a good book, or it makes me want to prepare soup.  Or both.  But today I wanted something heartier than even my heartiest of soups, something filling that I could really chew on, so I opted to make a batch of chili.  I was just about to make my Easiest 3-Bean Chili Ever (a super old-school PGEW recipe, but awesome for Bare Bones moments), when I remembered I'd taken out the last of the stew meat I'd gotten on sale to use in.... well.... stew.  Not the smartest move, considering I didn't have many of the fixings for Poor Girl's Beef Stew.  So I just put together what I did have on hand and made a chunky, hearty steak chili instead. 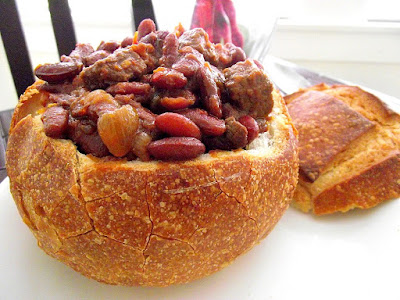 It was just what I needed and ever-so-simple to prepare!  I'd already cooked up some red kidney beans so there was very little to do in that department.  Of course, canned beans will also work just fine; I just find it cheaper to buy dried beans in bulk and cook them up on my own.  I seasoned my meat well beforehand so it would be tender & flavorful, not the bland, shoe sole-esque steak that sometimes makes itself into chili recipes like this.  And because I'm officially a tomato snob suffering with tomato withdrawals due to the fact that everything in the stores these days is either pink & waxy or bruised & mushy, I did not use fresh tomatoes.  I used the last of my very favorite jarred salsa, Herdez Salsa Casera, which gave my chili plenty of kick and cut down on about 10 minutes of meticulous chopping.

This satisfied my bowl-of-hearty-something cravings for awhile, and I got to serve it in one of the little sourdough bread bowls one of my yard salers had generously donated to me last week (bartering can be just as fun as selling!).  I have enough leftover for tomorrow's work lunch, and still have plenty of dried beans to make The Easiest 3-Bean Chili Ever, if I get another craving before I get my coveted second paycheck.  Who says Bare Bonesin' it can't be fun & tasty?

In a small bowl combine the cumin, garlic powder, onion powder, cayenne pepper and salt, and stir to combine.  Add the steak, soy sauce brown sugar and seasonings to a larger bowl, and toss everything together until the steak is completely coated with the mixture.  Allow to marinate for at least 30 minutes.

Heat a large pot over medium heat and add the oil.  Toss in the garlic and onions, and allow to cook for about 1-2 minutes, until just fragrant and the onion begin to turn translucent.  Add the seasoned steak and cook until just browned, about 4 minutes.  Add the beans, broth and salsa, and bring to a simmer.  Reduce heat to medium low and simmer for 15-20 minutes, until the liquid has reduced by about 1/3 and the remaining broth is thick & rich.  Check for seasonings and adjust according to taste.  Remove from heat.

Serve generous amounts of chili in bread bowls or regular soup mugs, top with your favorite chili fixings, and enjoy!