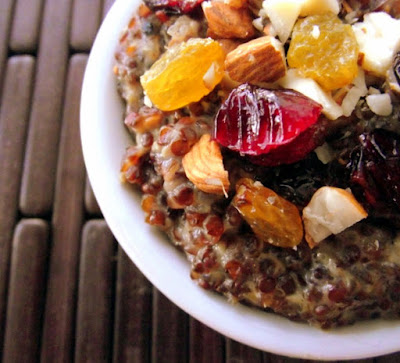 Oh boy, here I go posting two quinoa dishes back to back at the beginning of the year like I did in '09.  What can I say?  I love the mother grain and it's a wonderful way to start (or continue) eating healthy in the new year.  Since I'm an official "ruler" for the January Rules challenge over on Eating Rules, I thought it would be fun to really showcase how fantastically delicious eating whole grains can be, while keeping with the Poor Girl tradition of making the most of what you have.  Literally.  These last two quinoa recipes were made from the same cup of dried red quinoa and have given me a good four days' worth of tasty, nutritious meals.

Now, I've sometimes been known to create some dishes that are a little bit off-center, particularly when it comes to using quinoa.  That's partly because I'm sometimes left with odd ingredients that don't always seem to go well together, but mainly because quinoa just so darned versatile.  Today's recipe is definitely on the unique side and shows off that versatility beautifully.  This super-nutritious grain can be used it in salads, breakfast bowls, baked goods, you name it!  I've done so here on PGEW many a time.  After making the Red Quinoa & Asparagus Salad with Toasted Cumin Vinaigrette earlier this week, I wanted something sweet to make use of the rest of my quinoa.  And as I was looking to make a non-baked dessert with these leftovers, rice pudding seemed like a great model to follow.

Gleaning inspiration from a few cookbook recipes & old arroz con leche attempts, this is what I ended up making.  Part breakfast, part dessert, this dish is sweet, satisfying, and quite easy to prepare.  While some rice pudding recipes require an egg or two (and I'm sure eggs wouldn't hurt the end result for this one), I found that the quinoa's own residual starches, combined with the sweetened milk, created enough of a thick, pudding-like consistency.  I added cinnamon, nutmeg and ginger to give the pudding some warm, comforting undertones, and added plump golden raisins and dried cranberries for extra sweetness & texture.  Though you can cook up a batch of quinoa specifically for this recipe, you can also put your leftovers to good use and make this dish with those instead.  Because quinoa is so filling and packed with protein, I find that smaller portions of this pudding are best, making for a satisfying breakfast, snack, or dessert that will help keep you full.  Let's check out the recipe!

In a medium saucepan, combine the milk and brown sugar, and whisk together well.  Add the cooked quinoa and cook over medium low heat for about 15-20 minutes, or until the mixture has thickened and is the consistency of a rice pudding.  Stir in the vanilla, cinnamon and nutmeg and cook for another 2-3 minutes.  Finally, add the cranberries and raisins, and stir to combine.  Remove from heat and allow the warmth of the pudding to plump up the berries & raisins for about 1-2 minutes.

Serve in small ramekins or bowls and garnish with extra dried fruit & chopped almonds.  Serve warm or chilled, and enjoy!