Okay, it's official: that groundhog LIED. 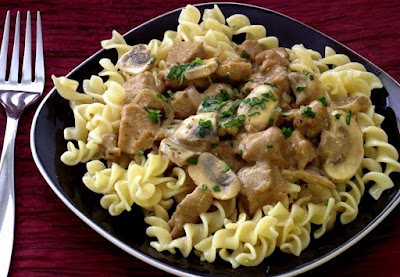 Now, I probably don't have as much right to complain about the weather here in Northern California as the folks back East, but I'm going to anyway because this isn't something we're used to.  Evil, freezing temperatures, hurricane-style wind & rain, and possible snow in San Francisco.  IN SAN FRANCISCO!!!  This is definitely not the California-lovin' weather I long for & miss ever-so-much.  But no matter how much I dream of warmer temperatures, I know they won't be making an appearance for a long time because that cute little rodent who predicted an early spring is a compulsive liar (he did this last year, too).

More often than not, cold weather makes people crave comfort food, and I am no exception to that rule. Ergo, I'm happily wrapping myself in the warmth & comfort of dishes like beef stew, casseroles, and hearty soups while we deal with these frigid conditions.  But this time around, I wanted to try something a bit different that would be just as hearty and comforting as some of those other dishes.  It had been approximately forever & a day since I'd last had a good beef stroganoff with tender beef, mushrooms and plenty of savory sauce atop a bed of noodles, so that seemed like a good idea.  I had the noodles, I had the mushrooms, I had sauce fixings; but where was the beef?  Sadly, not in my kitchen. 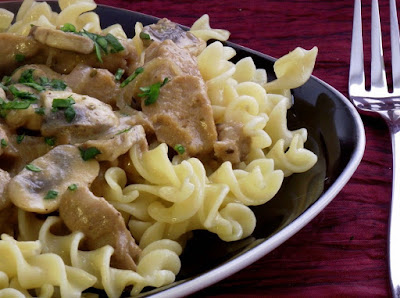 Luckily, I still had a package of seitan hangin' out in ye olde fridge, a definite score at just $3.49 at the Co-op the last time I went.  Though it's not as inexpensive as tofu, seitan is a fabulous alternative to meat, and it does a much better job of mimicking a meaty texture than its more popular soy-based friend.  The few times I've cooked with it I've enjoyed it in place of chicken, so using it as "beef" was definitely a departure.

I ran into a few roadblocks when it came to making the sauce, since seitan doesn't lend itself to browning as beef does.  Part of what makes some sauces so incredibly tasty is that fabulous deglazing process, when you use different liquids to break up the browned bits left behind by the meat to create a flavorful base.  But with the help of a few herbs & condiments, I was able to get a pretty decent flavored sauce that, while not authentic, was just perfect for my finished product.  Combined with perfectly cooked mushrooms and some thick noodles, this made for a fabulous entrée that I served with a crisp salad for an easy weeknight meal. 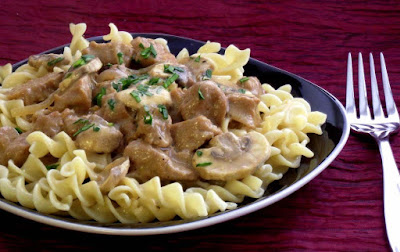 As I always do when I post a seitan recipe, I'm asking you to please proceed with caution if you have any sensitivity to wheat or wheat products.  I'm lucky not to have these sorts of issues and consider myself a proud omnivore, able and willing to enjoy a variety of different foods.  If you do have wheat allergies but still want to try this, no worries!  Simply omit the seitan and double the amount of mushrooms, and you'll have a fantastic dinner.  Let's check out the recipe!

Heat a large skillet over medium high heat and add the olive oil.  Add the garlic & shallots and cook for 1-2 minutes, or until fragrant and just lightly browned.  Reduce heat to medium, add the seitan and cook for about 3 minutes, followed by the mushrooms, herbes de provence and pepper.  Cook for another 2-3 minutes, or until the mushrooms begin to release some of their moisture and start to become tender.  Using a slotted spoon, remove the seitan & mushroom mixture (it's okay to leave the shallots in the pan) and set aside in a bowl.

In the same pan, add the Braggs/soy sauce and wine and bring to a low simmer.  Quickly whisk in the yogurt (it helps if you've smoothed it out with a few whisks before adding it to the sauce; this will help avoid any curdling), and stir until completely incorporated.  Allow to simmer gently over medium low heat for about 1-2 minutes, stirring occasionally.  Return the seitan & mushroom mixture to the sauce and cook for another 3-4 minutes, so that the all the flavors are completely combined.

Spoon generous amounts of seitan, mushrooms and sauce over a bed of freshly cooked noodles, garnish with chopped chives & freshly ground black pepper, serve with a nice salad, and enjoy!