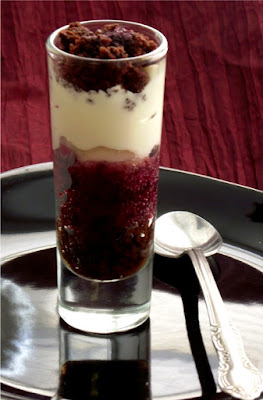 Earlier this month I was invited to a friend's housewarming party, so I decided to make some incredibly decadent, rich, fudgy brownies to share with everyone. Things were going beautifully at first: I'd made a fabulous batter, sensational aromas wafted from the kitchen into the rest of the apartment; in under an hour, I'd be in chocolate heaven.

Grinning with pleasure at the thought of brownies soon to be covered with thick, dark chocolate fudge frosting, I reached into the oven with pot-holder-clad hands and began to pull out my masterpiece. Suddenly, and for no real reason, as both StuKitty and Hana were peacefully sunbathing in the bedroom, I lost my hold on the pan.  Not wanting to get seriously burned, I just let it fall, thinking I'd only lose about a corner's worth of brownies.  It wouldn't be a total loss, I thought, because I'd just be cutting everything up into smaller cubes anyway.  No problem at all.

So down the pan fell, face down onto the oven rack, bouncing off the oven door, and finally, onto the floor, just inches away from my bare feet. Piping hot brownie pieces were everywhere – on the floor, in the blazing hot oven, on the fiery oven racks – everywhere but my pan. That thing was clean as a whistle (thanks, PAM for Baking!), and I wanted to cry.

Kitchen disasters.  They happen to the best of us. 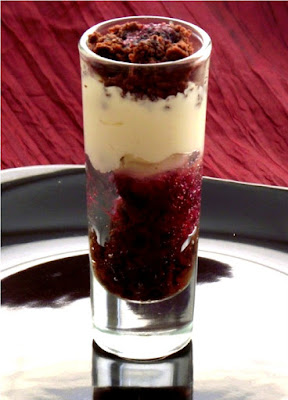 After a few cleansing cuss words and deep breaths, I regrouped and carefully salvaged what I could for myself.  As I did so, a plan began to form. I knew I would still have to make something completely different for the party, but I had high hopes for my new culinary venture.  Since I pride myself in being the queen of kitchen resourcefulness, I was not going to let this get me down.  And so, the following dessert shot was born.

For those of you who don't usually drop entire pans of brownies in your oven, this fabulous little recipe is actually a great way to make use of any normal leftover brownie pieces you may have.  Since it would hold up better in the layering process, I decided to use my standard no-bake cheesecake base instead of whipped cream in my version of this classic dessert.  I also used raspberries rather than the traditional cherries because that's what I had on hand, but either fruit would be fabulous in this.  As with all my dessert shots, this is a great way to enjoy a sweet treat after a nice meal without the extra guilt of a giant dessert.  And because they're so tiny, a few ingredients will go a long way, making it easy to serve several without spending a fortune.

Combine the raspberries & sugar in a bowl and toss together.  Mash the raspberries slightly with a fork, and set aside to allow them to create their own syrup while you prepare the cheesecake base.

Using an electric mixer, whip the cream cheese in a large bowl.  Add the sweetened condensed milk & vanilla extract and mix together at medium speed until smooth.  Add the lemon juice and mix for another 20-30 seconds until the mixture has thickened slightly.

Assemble your parfait shots by pressing about 1 tablespoon of brownie crumbles into the bottom of each shot glass.  Next, add about a tablespoon of raspberries, followed by a tablespoon of cheesecake mixture.  Continue layering until each glass is full, and garnish each one with extra brownie crumbles.  (Feel free to reverse the layers of cheesecake & raspberries for different looks & flavor combinations.)  Chill in the refrigerator for at least an hour, and enjoy!