I have a much healthier, non-dessert recipe to share with you, I swear; I just couldn't let today go by without properly paying homage to one of the greatest desserts of all time: S'mores.  It's National S'mores Day today, and we're gonna celebrate it Poor Girl style. 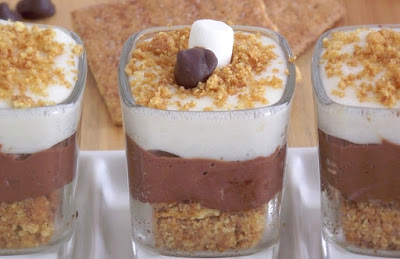 It's been quite some time since I've posted a dessert shot.  The discovery of my inner ice cream-making goddess ended up drowning out all the ideas I had for my series of tiny treats.  The funny thing is that when I ended up enjoying the fruits of my ice cream-making labor, it was usually from... a shot glass.  Or a tiny 1-2 oz. ramekin.  Something just big enough to give me a few mouthfuls of dessert, but small enough for it not to be a full meal.

Obviously, I still have a thing for tiny desserts. 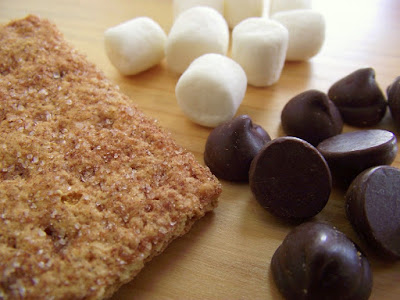 So, I decided to give the old ice cream churn (a.k.a. my right arm) a rest to celebrate the s'more as a dessert shot.  Tweaking my standard no-bake cheesecake base a bit, I layered this chocolaty "cheesecake" with homemade marshmallow creme (well, the creme was homemade; the marshmallows were not) and a thick, cinnamony graham cracker crust.

The result is a creamier version of everyone's favorite camping treat that's a much less messy than the original. It's quicker to prepare than some of my other cheesecake shots, making it a great dessert option for an impromptu dinner party.  Refrigeration period aside, this only takes about 15 minutes to prepare!  And because the flavors of the s'more are so classic, this dessert works well year round. 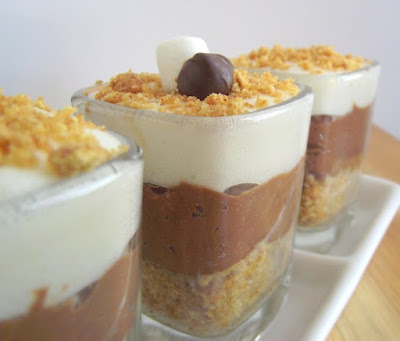 A couple of notes before we look at the recipe: Because you're using small amounts of each ingredient, you have the ability to stretch out the use of those ingredients for use in different recipes.  Naturally, some sacrifices have to be made, like not being able to use uber-swanky ingredients, but that's okay.  Of course I'd love to use some Valrhona chocolate in here, but that's not exactly in my budget so I used regular chocolate chips instead.  Store brand, even, which aren't quite as tasty as the Nestlé or Ghiradelli, but chocolate nonetheless and much more affordable.  If you don't have chocolate chips handy (I try to keep some around for rainy day chocolate chip cookie making), melt a couple candy bars together.  No graham crackers?  Use regular vanilla wafer cookies & a dash of cinnamon for the crust instead.

The trick to (and beauty of) dessert shots is to improvise.  Find what works for you with what you have on hand, play around with it, and stretch it out by making it smaller.  Tiny, individually sized desserts are great for serving to guests without breaking the bank on an expensive dessert.  They're a little bit better for you, too,  since you're not having all those extra calories in a larger confection.

Don't let their tiny size fool you, though! There's nothing small about the taste.  Let's check out this decadent little recipe...

Directions:
1.  Prepare the crust by combining the crushed graham crackers and melted butter in a small bowl and mixing together.  Set aside.

2.  Beat the cream cheese with an electric mixer or whisk until creamy & smooth.  In a small saucepan, melt the chocolate chips over low heat, whisking until smooth.  Gently fold the melted chocolate into the cream cheese and mix until completely combined.  Set aside.

3.  In a separate small saucepan, combine the marshmallows and milk.  Allow the marshmallows to melt over medium low heat, whisking occasionally to prevent from sticking to the bottom of the saucepan.  Remove from heat and set aside.

4.  Assemble your shots by adding a generous spoonful of graham cracker crust to the bottom of each shot glass and pressing until firm.  Next, add a large spoonful of the chocolate cheesecake, followed by a layer of marshmallow creme.  Refrigerate for about 30 minutes.

5.  When ready to serve, garnish with some extra graham cracker crumbs, a chocolate chip and a marshmallow (if desired), and enjoy!

NOTE: This is a "Day Of" dessert, meaning it should not be made until the day you want to serve them.  They will store just fine for 1-2 more days, but it's not advisable any longer than that, as the textures will be much different.