Tip #14 - Stock Your Kitchen Without Emptying Your Wallet, Part I - Small Appliances & Alternatives

I talk a lot about the many things one can do with basic ingredients here on PGEW, and with good reason.  After all, this is a food blog and the majority of my posts are recipes that I create for myself and, in turn, share with you.

But PGEW isn't just about the yummy recipes.  It's about changing the way you think about eating on a budget and everything that goes along with that.  From how to make the most of certain ingredients to rethinking old food shopping habits, I try to share some of the things I've learned through the years that really help me keep my food costs down.

The one thing I've neglected to cover, however, is how to stock your kitchen to make some of the recipes I post here on the blog.  One thing is having all the ingredients handy; another is having the right equipment to turn those ingredients into a tasty meal.  It's a topic I have wanted to cover for some time, and I have Stella, a PGEW reader looking for advice in this very area, to thank for reminding me to do so.

It's not always easy to get the basics...

When you're really struggling financially, you try your best to go without a lot of things some folks take for granted.  Weekly pedicures, trips to the spa, that daily latte - that's all stuff that I don't even have on my radar, partly because of the budget and partly because I consider those things to be a bit frivolous (not that I don't enjoy them; they're just not actual necessities).  But sometimes getting basic things like small appliances for one's kitchen, pots & pans, cutlery & gadgets - stuff that may seem like everyone should automatically have - can take a spot on the back burner, so to speak.  It's just not something one can justify when the real necessities - food, shelter, medicines & reasonable amounts of clothing - come first.

I go through this far more often than I'd like.  Yes, I finally have the full-time job that had been eluding me for the past couple of years, but that doesn't mean that I was immediately pulled out of my broke-as-hell status.  I have student loans to clean up; I'm still on payment arrangements for past due utilities from when I was unemployed; and I have a new, lifelong nerve disease to contend with, one that sucks away that kushy luxury known as Sick Time.  So, that paycheck that could be lovely and fun to play around with will only go so far. Sometimes, it doesn't go far enough.

So why am I telling you all this?  Because I know I'm not the only one in this situation.  And because I know that, as hard as it may be to find them, there are some temporary solutions for what ails those of us with tiny kitchens & even tinier budgets. 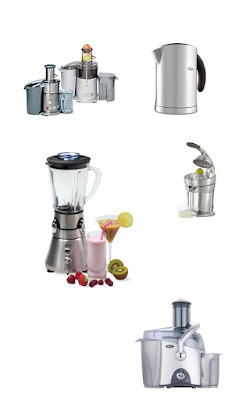 Since there's so much to cover when it comes to stocking one's kitchen, I've decided to turn this into a series of tips.  I wanted to start off with a general overview, but as a thank you to Stella for waiting so patiently for an answer to her question, today we'll cover the first of the "Big Basics": Small appliances.

Now, I'm very lucky to have a mom whose favorite thing is to raid the kitchen section of any store she happens to be in (drugstores included, lol) and come back with things I never knew existed.  Because of this, I have a very well-stocked gadget drawer and a few nice pots & pans.

But my mama's on a tight budget, too, so things like blenders, food processors, ice cream machines and the like are not things she'll be getting herself or yours truly anytime soon.

So how the heck do you make some of your dishes without these machines, Poor Girl? 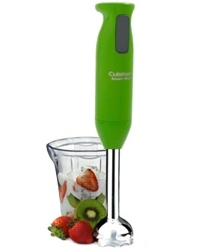 I have one awesome machine and one awesome machine only: my immersion blender.  I don't have a blender, food processor, stand mixer, bread maker, ice cream maker, or any other big kitchen machine that would probably make life a little easier (if not more cluttered).  Whatever I don't do with the immersion blender, I do by hand with some knives or non-mechanical gadgets like graters.

It didn't used to be this way, of course.  But when times were really tough, I had to sell a lot of things, including those kitchen appliances which weren't absolute bare bones necessities.  Knife = kitchen necessity.  Fancy food processor = fabulous toy that one can do without, even if one doesn't want to.  Since knives & graters aren't always practical for doing things like pureeing soups or fruits for granita (unless you're some crazy Inspector Gadget-esque person with crazy fast knife skills), a little help from an electrical appliance is nice in those situations.

This is why I love my immersion blender so much.  It gets the basics of whipping, pureeing and excessive chopping done much faster than I would using good old-fashioned elbow grease (which should never be forgotten - sometimes that works better than any machine!).  My Hearty Mushroom & Potato Soup?  The base for that was made using my little stick blender.  The Kiwi-Basil Granita?  I used my stick blender to puree the fruit & herbs before turning into a fabulous frozen confection.  My random pesto concoctions?  Same thing.  All of these were done with my little immersion blender and some diligent chopping by yours truly.

But some of these little stick blenders can be rather pricey, so for those who don't have an extra $50 to invest in a high-end immersion blender, even that's a pipe dream.  Other appliances, like food processors or stand mixers can cost hundreds of dollars.  So what are some options for getting the very basics on the cheap?
Of course, the above doesn't just apply to immersion blenders.  Anything from gadgets to glassware, pots & pans to silverware, can be found by using these resources.  Sure, it takes some time & effort, but when you're low on cash sometimes time & effort are all you have to get by.  I will cover tips on how to get the smaller stuff in future posts, but before I go, here are a couple of alternatives to keep in mind while you wait to have enough dough to get that stick blender:
That's it for this first edition of Stock Your Kitchen Without Emptying Your Wallet!  I hope this has been helpful for those of you who are having a hard time getting that kitchen set up, and please be sure to pass this along to anyone who could benefit from this tip.  Next time we'll cover some must-have gadgets, including the ones listed today.

Have a great weekend, everyone!