My third year of participating in the San Francisco Food Bank's Hunger Challenge caught me off guard.  Sure, I had just written about it in my latest What's In Store... post, so it's not like I didn't know it was coming.  I just didn't have the chance to prepare for it like I did last year.  I hadn't made a plan, I hadn't done any shopping for the week, and I had exactly $0.58 in the bank until my next payday.  Ack.  (Don't you just hate rent time? Wipes you out!).

But as I scrambled to get some breakfast & lunch ingredients together yesterday morning, I realized that this was probably a good thing.  After all, being hungry and subsisting on the bare minimum isn't exactly something for which one generally prepares.  Illnesses, unemployment, evictions - all these things catch you off guard; so does the inevitable hunger that follows when you can't pick yourself back up again after falling on those hard times.

Realizing I'd need some sort of strategy before I made a complete mess of things (because, let's face it: sticking to $4/day is HARD, even for me), I decided to put on my serious Poor Girl hat to see just how useful my own blog could be to someone who actually does need to live this way - the very same situation I was in just last year, when I had to go on SNAP myself.

So, I decided to approach things with the same mindset I had to have last year when I first went on the SNAP program.  Which, ironically, is similar to what I'm currently facing (only this time around I have the benefit of having a job & know I'll be paid soon, thank goodness).  I put myself in the shoes of someone who just got blindsided by a job loss, has close to nothing in the bank or even in the wallet, and who can only work with the little they have left in their kitchens because they're either waiting or have been denied for SNAP assistance.  Basically, what many Americans are facing every day.

Considering it was the 10 year anniversary of the day that changed our country forever, I didn't have much of an appetite at all for the first day of the challenge.  I'm one of those overly sensitive types that absorbs other peoples' hardships like a sponge, so the oversaturation of those horrifying 9/11 images on every piece of media was a bit much for me to take.

Since I was so uninspired, I did what I normally do and shopped from my own cupboards & fridge for ideas. While many Hunger Challengers prefer to shop for the week (like I did last year), the reality is that when you're on assistance, you don't always have money on that handy EBT card.  Depending on when you applied there could be several weeks of waiting before you actually have money to use.  And if you're not good at budgeting, those few bucks can go really fast and you're left waiting.... again. 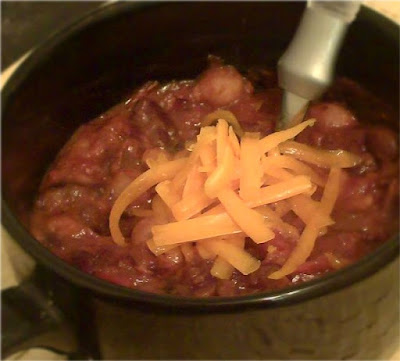 Because of this, sometimes all you can do is work with what you already have on hand.  This is pretty much the Poor Girl mantra, but it's not always easy to do because things may be so bad you may be stuck with just a bunch of rice and a bottle of mustard.  Still, it's one of the most important things I do to make sure I eat well on the cheap.

After doing a quick inventory of my fridge & food cupboard, I realized A) I'd been neglecting my Bare Bones staples as of late, and because of this, B) I had a TON of dried beans on hand.  This was a very good thing.  Beans are a wonderful way to get fiber, protein and good calories quickly, and while canned beans are more convenient, dried beans are infinitely more economical.

I cooked up a few pots of beans to use the rest of the week in different dishes.  I froze 1-2 cup portions in plastic zip bags and used the rest to make a small batch of The Easiest 3-Bean Chili Ever for lunch & dinner.  I halved the recipe to make the most of the beans I'd cooked, and omitted the canned tomatoes & cheese since I didn't have them on hand.  It was uber tasty and even after cutting the amount in half, I still had enough for a generous lunch, dinner and leftovers for another day.

With the small batch of rice I'd prepared to go along with my chili, a handful of grapes (which came from an awesome score I got from the Grocery Outlet - $1.99 for 2 lbs!!!), and my trusty water (I'm not a soda/coffee/etc. drinker), I spent $3.92 on my first day.  Not bad for having a heavy heart & very little inspiration!  Would I be so lucky on Day 2?