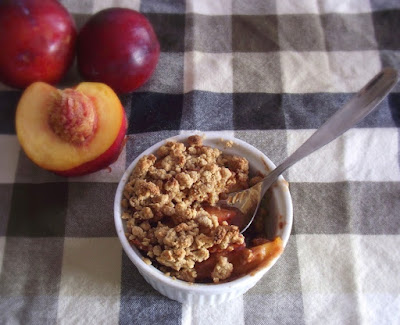 They tell me it's fall somewhere.  In fact, they tell me it'll feel like fall around here any day now, but with our temperatures still in the high 90's, I won't  believe that until I'm forced to whip out my sweater & rain boots.

That's okay, though.  We had a similar issue here in June when the weather was all turned around and we were getting winter storms rather than summer sun.  To combat the extended winter blues and encourage summertime to show its face, I started making ice cream and other warm weather food.  I figured it might be nice to try the same approach now to see if fall will finally appear.  After all, it is my all-time favorite season (as long as it remains relatively dry...). 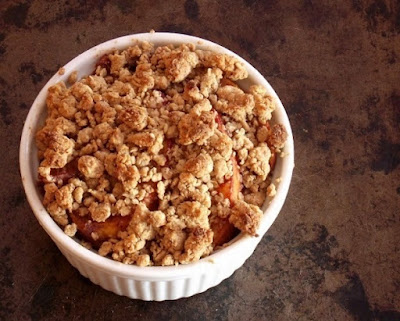 Today's recipe bridges the gap between summer and fall the way only stone fruit can do: with sweet, juicy fruit warmed up by plenty of intense spices.  As the stone fruit season starts winding down, I've been doing my best to stock up while staying within my budget, and some of the deals I've scored at my favorite farmer's market have been beyond phenomenal.  From mix & match plums, peaches and nectarines as low as $0.75/lb to a good fifteen pounds of cosmetically challenged peaches for just $3 (!!!!!!!!!), I've been in stone fruit heaven.

On my last trip to the farmer's market, I scored the above crazy peach deal along with some lovely plums & nectarines from my favorite fruit stand.  I wish I could remember the varietal of plum they were featuring that day, but let's just say they were a pure delight to sample.  Reminiscent of an Italian prune plum, these had that same sweet, green-yellow flesh, but were much larger and had a deep purple-red skin.  Amazing!  The nectarines were equally gorgeous (and huge), so I got three of each to enjoy throughout the week. 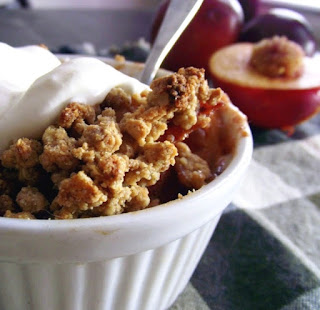 Once I got home, though, the baking bug hit.  It would be a shame not to try a couple of those fantastic plums in some sort of a baked good.  Perhaps my Mixed Plum Tart with Almond Crust?  No almonds that day, so I scratched that off the list.  I thought I'd try my hand at making a buckle (part fruit crisp, part cobbler), but didn't have enough of the wet ingredients to make it work.  What to do, what to do?

In the end, I decided to make a crumble with both the plums and the nectarines.  Inspired by my many fruit crisps and some recipes I'd bookmarked from Orangette, this was just the happy medium I was seeking.  The combination of the sweet plums and the slightly tart nectarines went perfectly with warm spices like nutmeg, cinnamon and allspice, and the crumble topping added a nice texture that was slightly more substantial than a crisp, but lighter than a cobbler. 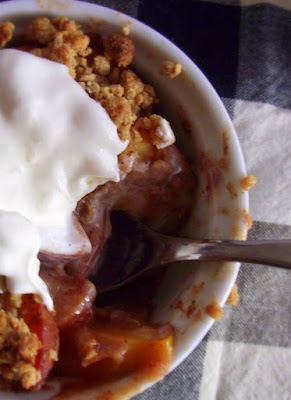 I tweaked Molly's recipe (which she also adapted from others) to suit my needs, of course.  Always the one to try throwing something "good for you" into a dessert, I amped up my crumble topping with a small amount of rolled oats.  I also used a pinch of cayenne pepper to give the fruit the spicy kick that was originally lent by the crystallized ginger.  Why?  Because crystallized ginger isn't something I always have on hand (and I really need to fix that because it's not that hard to make) and because that is the Poor Girl way: if I don't have it at home, improvise or make something else.

The last change I made was to omit a good portion of the butter that was called for in the original recipe.  I know, I know, butter & baking go hand-in-hand and butter tastes good.  But A) I only had one stick of butter to work with and B) I just don't need all those extra calories.  Besides, how else can one justify a nice dollop of homemade whipped cream atop one's crumble.  Does it affect the flavor?  I'm sure it must somehow, but in my world, all that extra butter is unnecessary.  Even without it, this is still one of those rich, comforting desserts that makes you long for cooler days, fuzzy sweaters, and the sound of absolute silence as you contemplate the end of summer and fun autumn things to come.

Directions:
1.  Preheat the oven to 375.  In a large bowl, mix together the flour, sugar and spices until well combined.  Add the plums & nectarines and toss.  Set aside.

2.  In a separate bowl, combine the dry ingredients for the crumble.  Add the melted butter and mix until slightly crumbly, then add the beaten egg.  Mix thoroughly with your hands, working the mixture with your fingers until moist crumles form.

3.  In a 9" pie dish (or a couple of ramekins), arrange the plums & nectarines in a single layer.  Sprinkle the topping evenly over the fruit until completely covered.  Bake for 25-30 minutes, until the top has browned and the fruit juices begin to bubble through a bit.  Remove from heat and allow to cool.

4.  Serve the crumble warm or at room temperature.  Top with creme fraiche or homemade whipped cream, and enjoy!